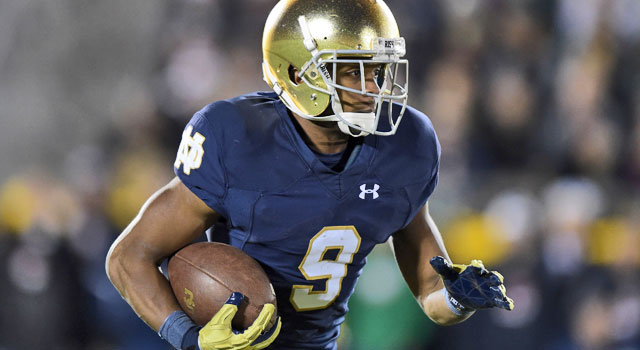 It’s game week, ladies and gentlemen, and to kick off the new season I’m starting a new weekly stock report that will appear every Tuesday. I’ll be looking at the recent trends from the team, what is working, what isn’t working, who is playing well and what to expect going forward. Think of it as a weekly market update, but for the Notre Dame football team, and I’m your market analyst. Hope you enjoy it as the season goes forward, here’s to no crashes this season.

What To Watch For In Week 1

A Strong Defensive Performance: One of the better defensive trends that Brian VanGorder has going for him is the performance of his defensive unit in the beginning portion of the season. A large part of this can be attributed to the fact that the team is at its healthiest at the beginning of the season and also because the competition at that point hasn’t exactly been a murders row of quality teams.

In 2014, Notre Dame opened with Rice and Michigan, dominating both of those teams with Rice picking up a bunch of garbage yards in the 4th quarter to make it look respectable for them offensively. Michigan of course was dismantled by the Irish in 2014, gaining a measly 289 yards of offense and scoring nary a point. The Irish defense was especially impressive against the same Texas Longhorns they will be matched up with on Sunday, holding them to 163 total yards and just three points.

Again, none of the aforementioned teams were particularly good on offense, but it is nice to know that VanGorder generally can get his unit ready in early season situations. I think we all know the defensive system can get complicated at times, but it’s reasonable to surmise that with an entire fall camp to get ready for an opponent (and with Nevada up next week Notre Dame is sure to be focusing completely on Texas) VanGorder has his troops on the same page this week possibly more than any other week this season.

Possible Special Teams Struggles: There have been some mixed reports regarding the performance of sophomore kicker Justin Yoon so far in fall camp; it was reported early on that he was missing field goals at a fairly consistent rate, and they weren’t of the 45+ variety. The word was he was booming the ball, but he was just a little off. Fortunately, he seems to have turned it around towards the end of camp and hasn’t been a storyline the last week or so. However, it should be noted that he did have a two game mini-slump at the start of last season, and he is working with a new holder this year. Something to keep an eye on should this game come down to a field goal or Notre Dame struggles again with touchdowns in the red zone.

Further, the possible suspension of Ashton White, Te’Von Coney, Dexter Williams and Kevin Stepherson, plus the dismissal of Max Redfield could have an impact on the Irish coverage units. It’s highly likely that White and Coney would have been fixtures on both coverage teams with Williams having a role either as the main returner on kickoffs or one of the up backs. The abysmal Fiesta Bowl special teams performance is still fresh in our minds and losing key players to those units wouldn’t be the best development entering a hostile environment when special teams tends to play a bigger role.

One of the big stars of spring practice was junior receiver Corey Holmes working out of the slot, to the point where he was being penciled in as the starter at that spot by many who follow the team closely, myself included. At the time there was a lot of doubt as to whether Sanders was even going to be available to Notre Dame in the opener, given his spring surgery to repair an injured hip flexor. Brian Kelly hinted in June that he expected Sanders to play a big role in the offense, signaling that Sanders was ahead of schedule in his recovery, and he has responded by having one of the best camps of any single player on the team.

He brings elements to the team that was missing with Amir Carlisle working out of the slot, which is elite quickness, shiftiness and acceleration. This is no shot at Carlisle, Sanders is simply more of a horizontal and long speed threat than what Carlisle brought to the table. Carlisle didn’t garner the greatest of respect when motioning on the jet sweep across the formation; Sanders is much more likely to a.) catch the attention of the defense and b.) exploit a crease when one appears.

It’s incredible how things can change for a player from season to season. For much of last season, the prevailing assumption was Hayes was a transfer waiting to happen; he was toiling on the bench and calling out his coaches on social media. He was redshirted, and the waiting game started for the news to drop that he was moving on. Luckily, he never did. By the end of spring he was firmly entrenched as a starter at defensive end, having passed up classmate Andrew Trumbetti, and his role was seen as so important that he caused a mini panic among Irish fans when he showed up to practice in a walking boot two weeks ago. Fortunately, he has healed from that injury and figures to be one of the key players for the Irish defense in 2016.

What happened here? As mentioned above, this guy was the talk of the spring in the slot. He came out of winter testing with the fastest 40 on the team, a better understanding of the offense and a renewed sense of focus after redshirting in 2015. I can’t stress enough that this guy was for all intents and purposes the starter in the slot. As of today, not only is he not the starter, but he’s not even the backup, a distinction that falls to newly scholar-shipped receiver Chris Finke. Kudos to CJ Sanders and Finke for outplaying Holmes for the spot, but what was once excitement around Holmes has now turned into confusion. What exactly is going to be his role this season? He’s now backing up Torii Hunter Jr. at the X position, and given that Hunter is now the only experienced receiver on the team, and a team captain, how often do we envision him leaving the field?

There have been too many occasions where we’ve seen guys who weren’t expected to play big roles step up and play fantastic, so it’s not to say Holmes won’t seize an opportunity that comes to him. But, right now, it’s hard to feel good about it.

Trumbetti started his career with a flash, and has since failed to build on the potential he showed as a true freshman. He started his career with 5.5 tackles for loss and a sack in 2014 as a rookie, and those numbers dipped to just 2.5 tackles for loss and a sack last season. He has since lost his starting position to the surging Jay Hayes and with the arrival of true freshman Daelin Hayes onto campus, who brings with him the potential of a fantastic pass rush when Notre Dame goes to their “speed package” Trumbetti is suddenly in a situation similar to that of Corey Holmes, a man without a role. He’s only listed as a 260 pounder, which makes him a little light against the run, and although his overall game is suited for a speed rushing role, he hasn’t displayed the burst off the line that someone like the freshman Hayes has. It’s a long season and players like Holmes and Trumbetti will have plenty of opportunities. It’s just hard to predict how and when those will come.