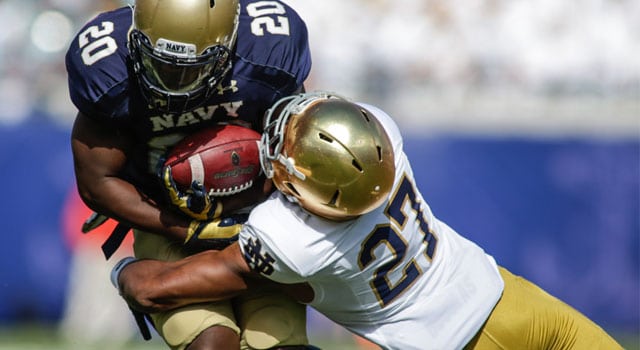 It would be hard for things to get much lower for the Notre Dame program right about now, following last Saturday’s one point loss to Navy, although losing to Army this week would definitely represent the bottoming out of the Irish market. And the question that has befuddled fans for a little over a month now has been what in the world is going on with the offense? It’s been the tale of two seasons, pre and post VanGorder. Prior to VanGorder’s firing, the Notre Dame offense was a formidable force, scoring 40 points a game and tallying 500 yards of offense. Since the firing they’ve tallied 371 yards per contest and 24 points a game. And all of this was done with what most everyone considers to be a first down talent at quarterback. I wrote about the two way miss a few weeks ago in this column, but it really has devolved into a one way miss. The defense has been good enough to win games the last five weeks and the offense hasn’t delivered in its role as the strength of the team. Unfortunately, there is no reason to think the offense will suddenly become a consistent scoring machine, and much of that is due to Kizer himself, who at times looks fantastic and at other times can’t hit a simple comeback route to extend a drive. The 2016 Notre Dame team is officially a depreciating asset.

Some guys just have a knack for the game of football and no one really knows why. Maybe it’s because they sit in their room all day watching football. Maybe they just have good coaching growing up. It’s those guys who tend to be the ones who hit the ground running as freshman because they always seem to be good at the little things. Julian Love is one of those guys.

Playing the option is tough, especially against a team like Navy who does it better than anyone. It’s especially tough for a freshmen because you hardly ever see it in high school and the scout team look you get in practice just won’t give you an idea of how good these guys are at cutting, misdirection and sheer execution. Yet, Love played the option last week like a guy who’s played against it his whole life. He finished with 8 tackles before having to leave the game early due to a concussion and his lack of presence definitely hurt the defense on Navy’s game sealing drive. He’s been solid ever since he began to full time minutes at corner in week 4 against Duke and will look to continue his ascent this week against Army, barring a return from his head injury suffered late against Navy.

Starting last season with the hiring of Mike Sanford, Notre Dame had three guys who were involved with the offensive play calling. Sanford gave suggestions, Mike Denbrock called in the plays, and Brian Kelly had the opportunity to override anyone at anytime. It worked out well last season, not so much so far this year. I don’t want to put the blame on any one person because who knows that the dynamics are exactly, though the responsibility always ultimately lies with the head coach.

Brian Kelly has always been considered by fans as a throwing coach who coaches soft teams. I’ve generally been a little skittish about calling his teams soft, and they’ve run the ball better during Kelly’s tenure than any coach since the Lou Holtz days. However, Kelly’s proclivity to throw the ball with Kizer has been especially troublesome this season, when he has far too often abandoned the running the ball, even when it is going well, in favor of throws from Kizer. On three separate occasions Notre Dame ran the ball for 5-7 yards on first downs, then passed the ball on the two subsequent downs. This led to touchdown, field goal, punt. The problem with passing on 3rd and 3 or 4 is if the pass is incomplete the ball hasn’t moved. It discourages a 4th down attempt. This is there mindset, and it is passive instead of aggressive. It’s scheme versus will and execution. It’s the type of mindset that brings a field goal down 4 in a game where you’ve only touched the ball 6 times. I don’t know who is affecting who on the offensive staff, but the three of them haven’t gotten it figured out.

It’s not just the special teams with Booker, and to be clear that unit has been really bad, but it’s also the play of the tight ends that has been concerning and sub par. Granted, he might be looking a lot better on this front if Alize Jones had been eligible this season. Losing a five star player at the position you are in charge of isn’t good for anyone, but last season’s results weren’t any better. I don’t like calling for the jobs of position coaches because too much of their success and failure is tied to variables outside of their control. Would the tight ends play better if they were a bigger part of the offense? Maybe they would. Maybe they’d be a bigger part of the offense if they played better. I’m not quite sure on that.

The problem though is he is in charge of special teams, and it’s been a dumpster fire this year. There have been conflicting reports on whether or not he is responsible for 12 men on the field penalty that extended the Navy drive after they were forced to punt, but the litany of mistakes we’ve seen this season doesn’t bode well for his future with the Fighting Irish program.

Through the first four weeks Sanders had 17 offensive touches for 254 yards and two touchdowns. Through the last five weeks he’s had five touches for 22 yards and no touchdowns. He also lost his job as the starting punt returner because he made the mistake against Miami. How does a player of his caliber just get phased out of the offense like this? He was a big play machine in the first month and now he’s essentially the starting kick returner? A specialist? How does that work? Even George Atkinson, who could only run fast, was making weekly contributions in 2012. Sanders can barely get a touch. Turn the young man loose.

Jarron Jones didn’t play all that much against Navy–only 12 snaps–following his monster game against Miami. Kelly said following the game that his style of play wasn’t really suited for an option team. He later implied Tuesday that Jones wasn’t so fired up to play against a Navy team that has never been shy about utilizing cut blocks. Army is also an option team that utilizes cut blocking in their running game. How much of a role will Jones play this week, and how effective will a less than motivated player be playing up the middle?