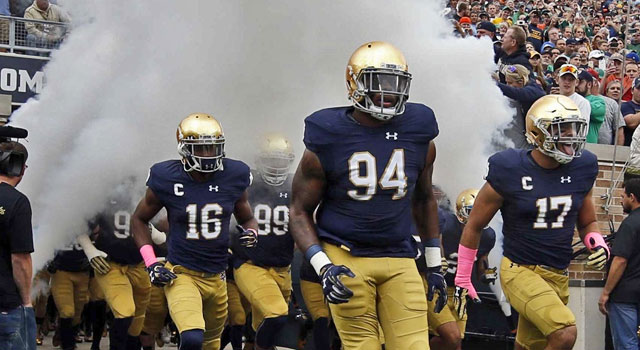 If you want to play a fun game at home amongst your friends and family, maybe during the Thanksgiving holiday, envision all of the talent on the 2015 Notre Dame defense playing under Greg Hudson and Mike Elston and not the philosophy experiment we saw every week with Brian VanGorder. Something tells me Nyles Morgan would have had a role in that scenario. Something also tells me Jaylon Smith would have been better than one sack. If there is one trend that is pointing way up in the last month of play, it is the performance of the much maligned defensive unit. Over the last three weeks the defense has allowed a total of 10.3 points per game, 3.9 yards per play, and 267 total yards per game. To be clear, they haven’t played a murders row of offenses by any stretch of the imagination. But, you know what, Duke wasn’t good on offense either and they put up 498 yards and averaged 6.7 yards a play. Michigan State is a putrid offensive team and they tallied 501 yards on 6.4 yards a play. It’s a good sign that Notre Dame is making below average offenses look bad, that’s what they are supposed to do.

Perhaps more importantly we are starting to see the talent of the individuals become talent for the group. The defensive line is taking on more blocks allowing for free rushes for Morgan and Coney. A stronger pass rush allows Cole Luke to jump an out route. The best defenses always take shape when the sum is greater than the individual parts and we are starting to see that on the defensive side of the ball.

The big man was just not having it on Saturday. There were to be no runs, and there were to be no passes and he was going to make all the tackles. Obviously, there have been some strong performances in more meaningful games along the defensive line in recent Notre Dame history, but 6 tackles for loss and a sack   against any team is phenomenal and somehow those stats don’t even do it justice. Just watching the game, if you saw a high school player doing this on film you’d think to yourself “yeah, but who is he playing against?” This was Miami. He was out there just chucking guys like the 8th grader playing against his little brothers grade school friends.  This of course makes the entire defensive unit much better, as teams will now have to come up with a game plan of how to deal with him. And a team that devotes extra blockers to Jones leaves guys like Nyles Morgan available to make plays.

And while we are here, huge credit to Jones for his effort on a 2-5 football team in his senior year. Yes, he is in something of a contract year given his eligibility running out after this season, but football is a physically demanding sport, especially for someone who is getting pounded on every play. This is what leading by example looks like.

I made several wrong predictions this leading up to this season–it wasn’t just me ok, they were ranked top 10 in the preseason by people who are paid a lot more than me to know this stuff–but Nyles Morgan was not one of them. He’s currently on pace for 105 tackles, 6 sacks and 10 tackles for loss. Those numbers compare very favorably to Manti Te’o in 2012 who finished with 113 tackles, 1.5 sacks and 5.5 tackles for loss. Obviously, Manti’s magic extended to the passing game where he tallied 7 interceptions on his way to a Heisman run.

On a game to game basis, he has probably been Notre Dame’s best defensive player, as he has been remarkably consistent on a defense that has been anything but so far in 2016. The shift to a simplified attacking style of defense has brought out the best in Morgan’s skills as he has been freed up to pursue ball carriers into the back field whether it’s the running back or the quarterback. His 2nd quarter sack of Miami quarterback Brad Kaaya came on a delayed blitz that effectively ended a Miami scoring chance and he ended the game on a very similar play. The common thread on these plays and the plays Manti used to make is when those boys hit you, football ceases being played. The prospects of what can be accomplished by Morgan in the coming games and next season continue to be very exciting.

Again, it’s amazing what can be accomplished by a young group of talent when you simplify their roles and assignments from play to play. It’s no coincidence that we’ve seen Cole Luke, Julian Love and Donte Vaughn play their best ball of the season the last three weeks and suddenly the big plays in the passing game have gone away. The safeties have been much more active on the back end and Dru Tranquill has become the run game force we expected heading into the season.

One of the biggest frustrations regarding the secondary in recent years has been the lack of ball skills, or being close enough to break up passes. They have been frequently “just a step away” but not close enough to actually make a play on the ball. Since Greg Hudson took over prior to Syracuse, Notre Dame has broken up 16 passes. In the previous four games they totaled only 11. Donte Vaughn has proven especially adept at getting his hands on the ball with an interception and four passes broken up on the year, second only to James Onwualu.

I’ve watched a lot of football in my life. Like, a lot. I’m not sure I’ve seen the combination of things that took place on Saturday with regard to special teams. Maybe I’ve seen each in isolation, certainly a punt hitting a player who wasn’t looking isn’t a novel thing, but all three in the same game? The greatest culprit of all this is coaching, well coached units don’t do these things. This is especially true of the punts hitting players who weren’t looking. It’s the type of thing that happens once every five years. It’s now happened twice in eight games. This wasn’t practiced over and over again? It wasn’t just Pride who wasn’t aware of getting away from the ball, the ball could have just as easily hit Jalen Elliot who was also blocking when the ball hit the ground, five yards from Pride.

I’m not totally sure how much you blame coaching for Sanders muffing the punt into the end zone and Elliot not jumping on the onside kick. Sanders was making a football play, trying to prevent the ball from going further towards the goal line and saving the offense from being on the goal line. He just panicked, not remembering he had fair caught the ball and could catch the bouncing ball without having to fall to the ground to protect himself. That’s a mental as well as a physical error more than it is a coaching mistake. As far as Elliot, I didn’t know you had to tell a player to fall on an onside kick. That’s the sort of thing you learn when you’re 14. Again, another mental cramp. Sure those can be attributed to coaching, and the overall play of the unit is a coaching issue, but on those two plays the players just need to be better.

When I profiled Greer Martini in the pre-season I said the two games he’d be most valuable to Notre Dame this season were against Navy and Army (Navy more so simply because they are better). Well, Martini was questionable because of a concussion.  He has shown himself to be excellent against the option teams in the past and he was one of the few players who has any experience against the option at linebacker. Against a team that requires precision and discipline, generally speaking, inexperience is not a good thing.