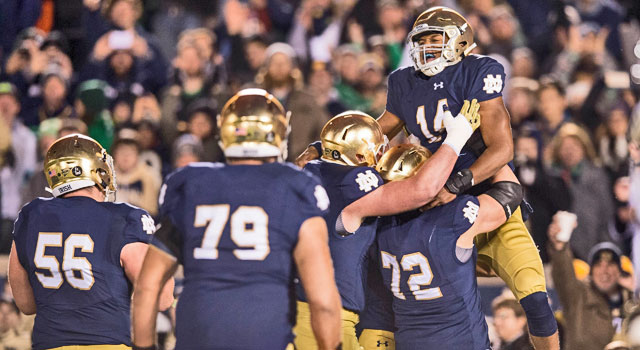 It will have been 247 days and approximately 5,928 hours since Notre Dame last took the field by the time the Fighting Irish square off against the Texas Longhorns this upcoming Sunday  (but who’s counting?) in Austin, and there are countless storylines that will occupy Irish fans this week until zero hour.  Will DeShone Kizer or Malik Zaire emerge as the starting quarterback?  Can Notre Dame overcome the loss of Max Redfield at safety?  How will defensive coordinator Brian VanGorder create an effective pass rush, or does Notre Dame simply lack the weaponry to do so?  While relevant, all of these questions are secondary to the larger question that holds the key to the future: will Notre Dame finally post back-to-back seasons with double digit victories?

How many Notre Dame fans realize 23 years have passed since South Bend has been home to back-to-back 10+ win seasons?  Legendary coach Lou Holtz accomplished the feat twice between the 1992 and 1993 seasons as well as the 1988 and 1989 seasons, but prior to the Holtz era it hadn’t been accomplished since Ara Parseghian during the 1972 and 1973 seasons.  In fact, Notre Dame has only posted back-to-back 10+ win seasons three times in the past 44 years, and Lou Holtz is the only head coach in program history to record three seasons In a row with double digit victories (although, in defense of past Notre Dame coaches, only nine to ten games were played per year in the Knute Rockne era).  But think about those numbers and compare them to the seasons two of Notre Dame’s traditional opponents have had in recent years.

Mark Dantonio accepted the head coaching job in East Lansing in 2007.  During his tenure as Michigan State’s head coach Dantonio has won at least 11 games in five of the past six seasons and is currently riding a streak of three seasons in a row of 11+ wins.  Since 2013 Dantonio has managed to accomplish a feat Notre Dame has only succeeded in doing once in its 129 year history.  And it’s because of Michigan State’s torrent of winning that the Spartans are currently knocking on the door of being a top ten ranked team again in 2016 despite:

Underscoring the point is the fact one of the true freshmen Dantonio will likely rely upon, Auston Robertson, was a recruit Dantonio gained by pulling the rug out from underneath Notre Dame.  Robertson, a 4-star defensive end from Fort Wayne, Ind., with offers from the likes of Michigan and Ohio State, is the kind of must-have prospect Notre Dame needs to bring in on an annual basis from within the confines of its non-fertile recruiting base of Indiana.  But winning begets winning, and there have been few programs that have done it as consistently well as the Spartans in recent years, creating a lure to East Lansing that makes life more difficult for Notre Dame.

A similar story can be told with Stanford.  David Shaw took over in Palo Alto in 2011 and in his five seasons as head coach he’s won 11+ games four times.  When you add in Jim Harbaugh’s 12-1 record in his final season as Cardinals head coach in 2010, Stanford had four consecutive seasons of double digit victories between 2010 and 2013, something Notre Dame has never accomplished in all of its storied history.  And that continued success plays a large role in losing key talent to Stanford, such as 4-star wide receiver Osiris St. Brown whose brother plays for Notre Dame and whose father has gone on record stating he would like the brothers to be teammates at the collegiate level.

This fall will be the fourth time since Lou Holtz’s departure in 1996 that Notre Dame will be coming off a 10+ win season.  In 2003 Tyrone Willingham followed up the previous year’s 10-win season with a 5-7 performance.  In 2007, Notre Dame went 3-9 under Charlie Weis after a 10-3 season in 2006.  And most recently, Brian Kelly posted a 9-4 record in 2013 after leading Notre Dame to an undefeated regular season in 2012.  This fall represents an opportunity for Notre Dame to take a large step forward in its quest to become a truly elite program, and as outlined last week, the stars have aligned themselves within Notre Dame’s schedule to make that step a real possibility.  But it’s an opportunity Notre Dame can ill-afford to waste.