Notre Dame Football: What We’ve Learned at the Midpoint 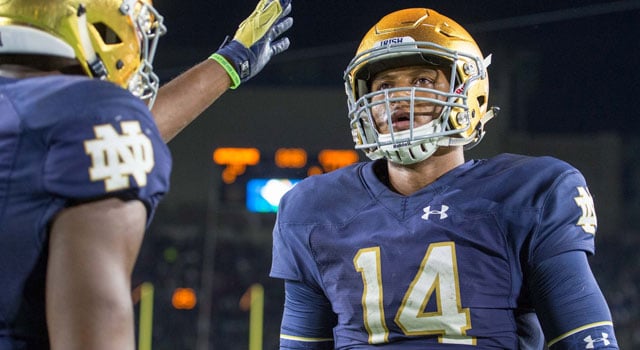 A bye week serves a useful purpose for college football teams, particularly when it occurs during the halfway point of the season.  In addition to a week of rest and recovery for players, the extra time off allows for a period of self-evaluation of what is and isn’t working for a program.  For Notre Dame, the question is whether one week is long enough to address the ever-expanding list of concerns.

This was supposed to be a year where the stars aligned for Notre Dame.  Talent was never a question.  In August Pro Football Focus awarded Notre Dame the distinction of having the No. 1 offensive line in the country, and many NFL Draft experts agreed, projecting Mike McGlinchey and Queton Nelson as first-round draft selections.  Even the biggest preseason question mark for Notre Dame was never truly considered a weakness.  The fact Notre Dame hadn’t settled on a starting quarterback between Malik Zaire and DeShone Kizer heading into fall camp didn’t stop outlets such as Bovada from naming both as Heisman candidates.  The talent was there, but what led many members of the media to vote Notre Dame into the preseason top ten was the manageable schedule.

Notre Dame’s schedule is what ultimately prompted me to predict an 11-1 season for the Irish in 2016.  Nearly every opponent either had a new head coach, a new starting quarterback or an extreme amount of talent loss (and in some instances teams had several of these issues).  I was concerned about Notre Dame’s defense – particularly defensive coordinator Brian VanGorder, who I was never sold on – but felt the offense was strong enough to carry the team against weaker than usual opponents.  But here we are, seven weeks into the season, and Notre Dame sits with a 2-5 record.

What happened to Notre Dame Football?

Those looking for a straightforward, black-and-white answer will be disappointed.  Nearly every position group has played a role in the death spiral Notre Dame currently finds itself in.  VanGorder led an Irish defensive unit that led the nation in the number of 60+ yard plays surrendered from scrimmage and was the last group in the country to register a sack.  Offensive line coach Harry Hiestand’s hyped offensive line has been a disappointment and allowed N.C. State’s Bradley Chubb and Stanford’s Solomon Thomas to be one-man wrecking crews.  To date the offensive line is tied with Florida Atlantic for 99th place in sacks allowed, and the 4.7 yards per play earned against Stanford would rank Notre Dame 108th nationally.

Yet, both units have played well enough for Notre Dame to win.  Interim defensive coordinator Greg Hudson inherited what many believed to be an unfixable situation and has managed to squeeze production out of it.  Between N.C. State and Stanford Notre Dame’s defense only allowed an unthinkable 11 points.  And despite the struggles of the offensive line Notre Dame outgained the Stanford Cardinal and matched their yards per carry (4.4).  The greatest problem facing Notre Dame currently is that the program looks directionless, and nowhere is that more visible than at quarterback.

Head coach Brian Kelly pulled starting quarterback DeShone Kizer at the beginning of the fourth quarter after Kizer, under pressure from a Stanford blitz, threw an interception on fourth down.  The immediate consequence of that decision led to Notre Dame losing to Stanford but the long-term consequences are yet unknown.  Zaire, with no time to warm-up, was put in a difficult position and was inaccurate with his throws.  Yet Kelly waited too long to put Kizer back in the game, providing him only one final drive to try and bring Notre Dame back to tie the game.

The one area of strength Notre Dame had in a season of uncertainty was at quarterback, and that strength is now in doubt.  Kelly informed the media after the game that there is no controversy and that Kizer is the undisputed starter, but what may appear matter-of-fact to Kelly isn’t necessarily so for Kizer.  After failing to convert a must-have 4th down on the final play of the game a downtrodden Kizer fell to the ground and stayed there until a teammate came and picked him up many moments later.  Kelly may view Kizer’s brief demotion during the game as just an in-game tinkering of strategy, but the damage to Kizer’s confidence as well as his trust in Kelly may have been the biggest losses from Saturday night.

Bye weeks may be times for self-evaluation, but for Irish fans, it’s just reliving an unexpected nightmare.