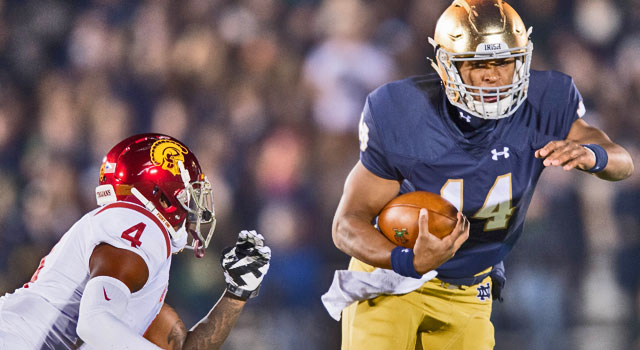 Two weeks ago Notre Dame’s September opponents were previewed with the Irish earning big victories over Texas and Michigan State, and last week took a look at October’s slate of games, leaving Notre Dame with an undefeated record heading into November for only the second time in the Brian Kelly era.  Can Notre Dame wrap up November with an unblemished record?

Head coach Ken Niumatalolo has more than kept Navy’s upward trajectory since taking over for former coach Paul Johnson in 2008.  Niumatalolo has had only one losing season in his seven years in Annapolis and reached his highest point in 2015 after notching Navy’s first ever 11-win season and cracking the Top 25 for the first time in over a decade.

There are legitimate questions as to whether or not Navy has reached its zenith, however, with the departure of Keenan Reynolds, the best quarterback to don a Navy uniform since Roger Staubach.  This viewpoint may have been validated by Niumatalolo himself when flirting with the BYU coaching vacancy this past off-season.  Had Niumatalolo decided to leave it would be difficult to blame him considering Navy will be forced to replace 35 graduating seniors from 2015.

The Navy offense has been decimated by turnover.  Keenan Reynolds is gone, as are all five starting offensive linemen and four running backs.  The loss of talent should devastate a Midshipmen offense that was No. 2 in the nation in rushing and No. 22 in scoring last season.  The triple-option offense is always a threat, however, and senior quarterback Tago Smith is ready to step in for the departed Reynolds.  And Notre Dame’s defense should be wary of the fullback dive from fullback Shawn White who weighs an unbelievable 255 pounds.

The Navy defense follows a similar trajectory.  The No. 26 scoring defense and the No. 32 rush defense from 2015 lose nearly their entire defensive line as well as their secondary.

Notre Dame fans have learned the hard way this past decade to never take the Naval Academy lightly.  That being said, even when Navy had one of its most successful seasons in program history last year Notre Dame was able to handle the Midshipmen 41-24 (although the game was uncomfortably close heading into halftime).

With the loss of so much talent, especially one of the greatest quarterbacks in program history, this should be a game where Notre Dame takes care of business.

Army has played second fiddle to the Naval Academy for years now and head coach Jeff Monken is trying to right the ship.  A 2-10 record in 2015 may not appear to be progress, but Monken’s Black Knights lost seven of those games by 7 points or less, and Monken’s hope is his squad is ready to make a substantial leap in 2016.

Army’s rushing attack is beginning to gain ground on Navy’s, with the Black Knights climbing to No. 12 nationally.  But the comparisons stop there.   Although starting running back Aaron Kemper is returning, starting quarterback Ahmad Bradshaw abruptly left the program during fall camp and the Black Knights have two holes to fill along the offensive line, which is bad news for a program that managed a middling 22 points per game last fall.

The defensive side of the ball has a veteran presence but was slightly below middle of the pack in 2015, ranking No. 75 nationally.  The lack of size in the front seven also doesn’t particularly help.

Perhaps Army will finally be able to nip the Midshipmen in the heels in 2016, but the Black Knights simply do not have the necessary weapons to truly threaten Notre Dame.

Notre Dame’s showdown with Virginia Tech will be a game of firsts.  Not only will it be the first time Notre Dame and Virginia Tech have played one another but it will be the first time since 1986 legendary coach Frank Beamer won’t be roaming the Hokies’ sideline.  Beamer’s retirement opens the door for new head coach Justin Fuente and his up-tempo offensive attack.  Fuente took over for a losing Memphis program and managed a 10-win season for the Tigers in only his third year, including an enormous upset victory over Ole Miss.

The Hokies have a quarterback battle between senior Brenden Motley and junior college transfer Jerod Evans, but given Evans’ athleticism it wouldn’t surprise if the newcomer was given the starting nod.  Evans has the size (6’4”, 235 lbs) and escapability that Fuente covets to oversee an offense with a lot of potential.  Running back Travon McMillian returns after a 1,000+ rushing campaign in 2015 and will run behind an offensive line that returns four starters.  Star wide receiver Isaiah Ford is also back after racking up 1,164 receiving yards and 11 touchdowns.  The Hokies also have a rising star at tight end in Bucky Hodges.

Many believe Fuente made a wise decision in retaining longtime defensive coordinator Bud Foster despite Virginia Tech having a relatively average season defensively in Beamer’s last year, save a very effective secondary.  The Hokies’ defense is strongest up front with run-stuffer Woody Baron and defensive end Ken Ekanem.

Virginia Tech is one of the most complete teams Notre Dame will have faced up to this point in the 2016 season, and Fuente should be able to breathe new life into a program that had begun to get stale.  I am actually shocked I have Notre Dame 10-0 heading into the Virginia Tech game, but that has far more to do with Notre Dame’s opponents than anything else.  It took eleven games before Notre Dame encountered an opponent that possesses all three of the following qualities: a) a talented head coach, b) lots of returning talent, and c) returning talent with proven star power on both sides of the ball.

Virginia Tech is beatable, especially if they’re unable to get the quarterback position going.  But I have a hard time imagining the 2016 Notre Dame team going undefeated, and Virginia Tech has the offensive firepower to pressure Notre Dame’s defense and the defensive talent to slow down Notre Dame’s rushing attack.  For that reason I’m taking Virginia Tech with the upset, although, a mere two seasons removed from knocking off the defending national champion Ohio State Buckeyes, it’s not as big of an upset as some may think.  The talent was always there, but was Frank Beamer getting the most out of it?

Clay Helton enters his first full season as the USC head coach after a 5-4 record when stepping in for former head coach, Steve Sarkisian, in 2015.  And Helton will have lots of offensive firepower at his disposal.  USC returns running back Ronald Jones II and his 1,000+ rushing yards as well as complementary back Justin Davis, who fell just shy of the 1,000-yard mark last season.  And leading the way will be an offensive line that returns all five starters, including tackle Zach Banner, who many feel is one of the best at his position in the nation.  The rushing attack alone is enough to intimidate most opponents, but that doesn’t even include an aerial attack led by star wide receiver JuJu Smith-Schuster, who recorded 1,454 yards and 10 touchdowns with 89 receptions last fall.

The potency of USC’s offensive attack is watered down with the questions present on the defensive side of the ball.  While the Trojans had the No. 41 rushing defense in the nation in 2015, Helton will have to replace the entire starting defensive line, and one of the best candidates to be the starting defensive tackle, Noah Jefferson, has been battling injury.  To counter USC’s shortcomings against the run Helton has already indicated his intention to bring down a safety to load the box, a move that will put pressure on a USC secondary that finished with a lowly No. 97 ranking nationally last season.

One thing is certain: even when USC is on a down cycle as a program their roster is stocked with talent, and 2016 won’t be any different.  But I am in the camp that feels USC swung and missed again on their head coach.  After Helton took over USC lost fairly convincingly to Notre Dame and was blown out by Oregon and Stanford, and was also unable to seal the deal against Wisconsin in their bowl game.  Helton failed to offer any proof during his 9-game stint as USC’s head coach in 2015 that he’s the answer moving forward.

With the extreme talent loss defensively for USC, and with a stronger coaching staff on Notre Dame’s sideline, I just don’t see a path to victory for the Trojans.

I think it’s important, now that I’ve predicted an 11-1 season for Notre Dame, to mention how I go about making these predictions.  I do not head into this process with a preconceived idea of what Notre Dame’s record will be.  Instead, I take each game one at a time, assess the strengths and weaknesses of each team and how they relate to Notre Dame’s roster, and make a decision.  As someone who ordinarily errors on the side of caution, I’m very surprised I have Notre Dame going 11-1 this season, and I think it’s important to point out this prediction has far more to do with Notre Dame’s schedule than a reflection of the strength of Notre Dame’s roster.

Nearly every opponent Notre Dame faces this year either has a new head coach, a new quarterback with little to no experience or is replacing nearly their entire front seven on defense (and some teams even had all of these issues combined).  While there are certainly stumbling blocks on the schedule – Texas, Michigan State, Stanford, Miami, Virginia Tech and USC all have the pieces to beat Notre Dame – overall the stars have truly aligned for Notre Dame’s schedule this year, as nearly every team is in rebuilding mode.  And it will be important for Notre Dame to take advantage of the opportunity.

Will an 11-1 season get Notre Dame into the playoffs?  That remains to be seen, but even if it does Irish fans will likely be disappointed by the outcome.  The Irish have a schedule that can take them far but if Notre Dame were to go against a team like Ohio State or Alabama, programs that do not have the weaknesses of Notre Dame’s regular season opponents, I feel the cracks in Notre Dame’s program – such as a lack of a pass rush and major question marks at safety, particularly with possible disciplinary actions against Max Redfield – will be made very visible.

Will I correctly predict Notre Dame’s season as I did last year?  We now have less than two weeks to find out.