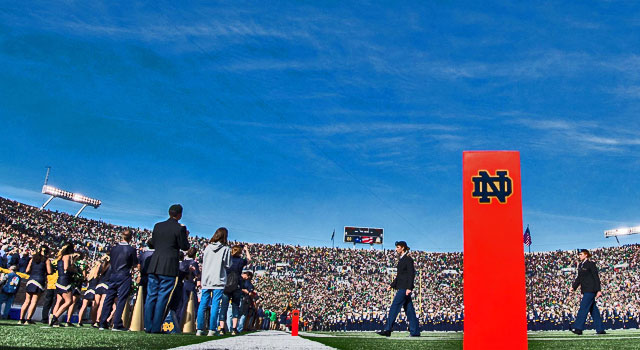 Get ready for today’s home opener against Nevada with this week’s Gameday FAQ!

Notre Dame is playing Nevada today at Notre Dame Stadium in their 2016 home opener.  Notre Dame last played Nevada in 2009 during Charlie Weis’s final season in South Bend.  The Irish shut out the Wolf Pack that afternoon 35-0 behind four touchdown passes by Jimmy Clausen.  Michael Floyd was huge for the Irish that day as well with 189 yards on just four catches – three of which went for scores.  Floyd scored from 24, 70, and 88 yards.

The Notre Dame defense entered that 2009 contest much maligned by shut out the Nevada attack that was powered by future NFL QB Colin Kaepernick.  The game was the first shut out of the Charlie Weis era and the first for Notre Dame in seven years at the time.  Despite the promising start to the season, Weis was fired at the end of the 2009 season following another disappointing campaign.

Deshone Kizer was named the starting quarterback for this weekend following his six touchdown performance against Texas on Sunday.  Against the Long horns Kizer split snaps with Malik Zaire in the first half and into the second until Kizer took command and scored 21 unanswered points to give the Irish a short lived lead.

This weekend is Notre Dame’s 2016 season home opener.  The game marks the 250th consecutive sellout of Notre Dame Stadium.  Notre Dame was undefeated at home in 2015 and will look to match that in 2016 if it is to have any chance at the playoffs.

Tonight’s game will be broadcast nationally on NBC just as every Notre Dame home is.  NBC will have Mike Tirico in the booth doing play by play with Dan Hicks on assignment.  Former Michigan alum Dhani Jones will be joining the pre and post game shows for NBC as well.

Today’s forecast before the game looks a bit iffy for tailgaters outside of Notre Dame Stadium.  There is a 50% chance of rain much of the day, but it looks like the skies should clear up before kickoff although a few lingering showers could pass through.   On a positive temperatures will be in the low 70’s/high 60’s at game time – a vast improvement from last week’s scorcher in Austin.

The line in this one hasn’t moved since it opened on Monday.  The Irish are a 28 point favorite according to the Bovada.