One the heels of last week’s heartbreaking loss to Texas, Notre Dame returned home to face Nevada.  While the Irish were a bit up and down throughout the afternoon, Notre Dame took down Nevada 39-10 in front of the 250th consecutive sellout of  Notre Dame Stadium.  The Irish, on a short week, were sluggish and sloppy in the first quarter, but used a 25 point outburst in the second quarter to take a commanding lead.

Saturday’s win over Nevada was really devoid of any huge plays.  There were no long touchdowns, defensive or special teams touchdowns, or game altering plays but a win is a win.  Notre Dame played without its top wide receiver with Torii Hunter out and then lost one of its best defenders in the win.

1. Shaun Crawford is a HUGE loss.

There really weren’t too many players Notre Dame could afford to lose less than Shaun Crawford right now, but they lost the talented corner for the year with a torn Achilles.  The sophomore had a great debut last week after his lost season in 2015 with the ACL and to lose him in week two is devastating to the Notre Dame secondary.

Nick Coleman filled in for Crawford, but he struggled again this week as he did a week ago in Austin.  Even when Coleman was in good position at one point, he fell on the play and gave up a big gain.  Coleman’s got talent, but his confidence has to be shook right now.  Notre Dame needs to find some corners FAST with Crawford done for the season, Nick Watkins still hurt, and Devin Butler suspended.

The young secondary got some experience in the second half so maybe the Irish will be able to look to the likes of Julian Love, Donte Vaughn, or Troy Pride.  All three played on Saturday and Kelly mentioned that Love is the nickel right now with Coleman outside.

For Crawford, a second major injury is just devastating,  A torn Achilles is a tough injury to come back from – especially after coming back from a ACL tear.  Hopefully Crawford is able to recover and come back strong for the Irish.

The statistics don’t necessarily show it, but the Notre Dame linebackers had themselves a game on Saturday.   We’ve been a little tough on James Onwualu at times here, but he had one of his better games in a Notre Dame uniform today.  Onwualu only had five tackles but two of them went for a loss for a combined loss of 10 yards.  He was also a sure tackler throughout the game and got some pressure.

Tevon Coney got his first start of his career and his performance raised questions as to why he didn’t play more against Texas.  In the back of my mind I couldn’t help but wonder if it was related to his August arrest.  Whatever the case, Coney showed that he is indeed one of the best linebackers on the team and needs to be on the field often.  Like Onwualu, he had five tackles with one coming for a loss.

Nyles Morgan was quieter than he was against Texas, but that might be a good thing.  Notre Dame’s thumping MIKE linebacker will be needed next week against the physical Michigan State offense.  Morgan ended up with just four tackles after racking up 13 last weekend but teamed up with Isaac Rochell for a tackle for loss as well.

This game felt more like a season opener than a week two game throughout much of the contest.  Both teams played extremely sloppy throughout the game, but Notre Dame committed seven penalties in the first half alone and that is just too many. Notre Dame cleaned things up in the second half and finished with just two in the second half but with Michigan State coming to town next week, Notre Dame simply can’t commit that many penalties again and expect to win.

Some of the penalties Notre Dame had were crushing too.  A Cole Luke interception was wiped out because of a roughing the passer penalty on freshman Khalid Kareem.  Two third and long conversions were wiped out because of offensive pass interference penalties too.  Those offensive PI’s were just poor fundamentals too.  On one Durham Smythe ran into a defender sitting down in zone coverage.  On another, CJ Sanders ran directly into a Nevada defender.  Something tells me Mike Denbrock will be working with his wide receivers this week on the rub play.

4. Whither the Notre Dame tight end?

For the second week in a row the tight end position was virtually non-existent for Notre Dame.  No tight end caught a pass or even had a target come their way this weekend.  In fact the only notable play for the Notre Dame tight ends this weekend was Smythe’s offensive pass interference.

The tight end position was a staple of this offense not too long ago and there isn’t really a reason is can’t be again this year.  Between Smythe and Nic Weishar, Notre Dame has talent at the position, but right now it is not a focus at all.  With Torii Hunter out for this game due to his concussion, today would have been a great opportunity to get the tight end involved.  Instead, no tight end caught a pass this week.

I love Tarean Folston and it was great seeing him get in the end-zone, but it is pretty clear at this point that Josh Adams is hands down the best running back on this team.  With just 10 carries on Saturday, Adams topped 100 yards with 106.  Folston gained just 33 with the same number of carries.  Dexter Williams topped Folston’s 33 with 56 yards on 8 carries and a touchdown of his own.

Adams’s skill was on full display on his dazzling 43 yarder in the third quarter when he took an inside handoff and slipped through a bunch of tackles to get into the open field.  Brian Kelly was asked about Adams being THE #1 back after the game and was noncommittal while stating they will continue to play all three backs, but it’s becoming harder and harder to not give #33 more carries.

6. What was with that red-zone play calling?

Notre Dame’s red-zone play calling left a lot to be desired on Saturday.  After marching down the field a few times against the Wolf Pack, Notre Dame seemed to go exclusively to the zone read or designed runs for Deshone Kizer instead of doing what got them there.  In a few instances, Kizer’s playmaking ability bailed Notre Dame out, but overall the playcalling instead the 20 was pretty questionable.

It only ended up costing Notre Dame one time when they had to settle for a feidl goal, but the offense just felt like it stalled down inside the Nevada 20.  Against a defense like Nevada, it didn’t matter but it might next week.

Notre Dame has 6’5″, 230 lbs Miles Boykin standing on the sidelines.  The guy is built to be used in the red-zone but he hasn’t been called upon down by the goalline yet.  Kizer throws a pretty good fade to the corner of the end-zone and had success with it with Chris Brown last year, but we haven’t seen it yet this season.  Boykin is a massive target and is built for such a role.

At the end of the day, Notre Dame wins y 29 on a short week and the defense – at least for a week – looks like a passable division one unit.  All in all, not a bad Saturday. 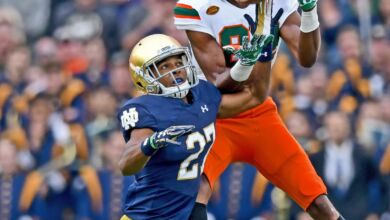 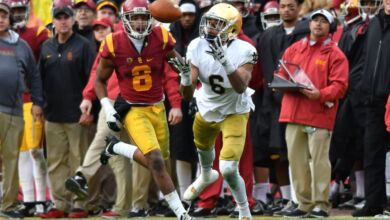 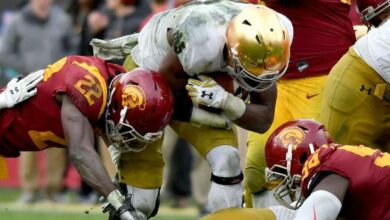