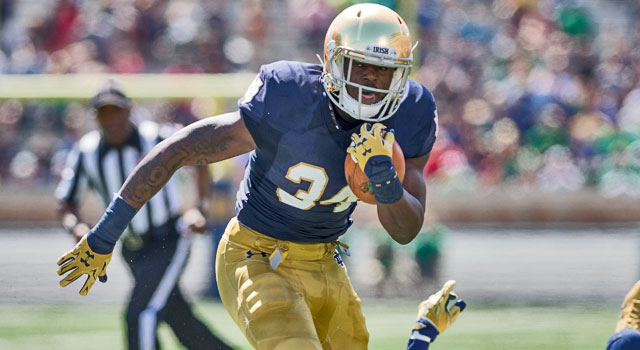 Notre Dame head coach Brian Kelly announced Wednesday that the four players who are still on the Notre Dame roster following last weekend’s arrest are still practicing and are currently “available” for Texas.  Further disciplinary action could still be forthcoming from the University, however, and in reading between the lines it sounds as the four are still very much in limbo.

Devin Butler, meanwhile, is still suspended after being charged and arraigned earlier this two on two felony accounts.  “He is still indefinitely suspended,” Kelly said. “He is not practicing.  He is not in the building.  He is not part of any football related activities at all.”

As for Dexter Williams, Ashton White, Tevon Coney, and Kevin Stepherson; those four players are still on the team and practicing as the Irish prepare for Texas.  “Those four players that were suspended are currently practicing,” Kelly said before cautioning,  “There could be further actions through the University and that will have to take it’s course. The University is certainly looking at all these cases and will be moving quickly through the process.”

He player will be dealt with individually as the University sorts through each case.  “Each is separate in their own.  I think my statement is pretty clear that a lot of these decisions are joint in that there are other implications and the University is involved in these as well.”

It is important to note that at this time, no charges have been formally made against any of the five players arrested in Ashton White’s car in Fulton County, Indiana last weekend.  Unlike Butler who was charged and arraigned earlier this week.

As far as Kelly is concerned though, he has dealt with his players and any additional action taken is out of his control. “Those matters are out of my hands,” Kelly said.  “I’ve dealt with it internally.  The’ve been handled within the program and the rest will be about what the University does.”

When pressed if they would play against Texas, Kelly only added, “They will be available to play.”

Kelly also would not elaborate on what he told his players.  “What we talk about stays among the team.  Wee’ve addressed anything that happens with our football team.  We have a number of conversations daily about what is expected.  Those are conversations that are between me and the team.

In reading a bit between the lines here, it sounds like the future of the players involved other than Redfield is directly tied to the legal system at this point.  Until there are formal charges, it is doubtful that the University will take any action and Kelly has reiterated that he has doled out all of the discipline that he intends to to these players.

If – and it’s a huge IF – charges are not made, it will be interesting to see what if anything the University does here.  If charges ARE made, then any/all players charged with a felony are subject to dismissal from the University.

The 6th player involved in last weekend’s off the field issues, Max Redfield was dismissed from the team on Sunday.