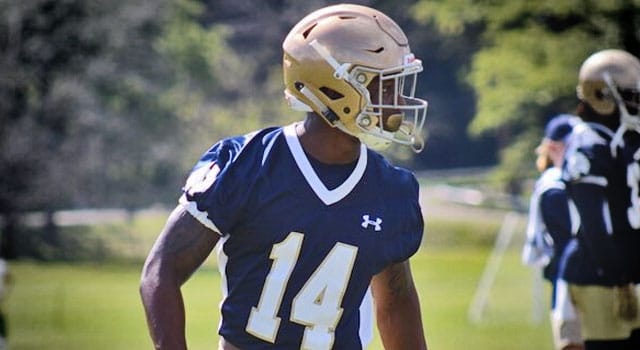 Brian Kelly did not waste too much time before deciding it was time to part ways with the much maligned Max Redfield following his arrest along with four other teammates on Friday night in Fulton, Indiana.  The former five-star recruit who never lived up to his promise on the field saw his Notre Dame career go up in smoke following his latest off the field issue.  While the future of other four members of the 2016 Fighting Irish remain up in the air, Notre Dame at a minimum faces a challenge in replacing it’s starting free safety.

The story of Max Redfield is a sad tale of unfulfilled promise and wasted opportunity.  For Notre Dame and its defensive coaches, there is simply no more time and no more chances for Redfield to fulfill that promise.  The Irish were forced to move on this weekend after his latest off the field issue and are now looking at starting a true freshman at a position that Brian VanGorder said just last week was one of the toughest to learn in his complicated defense.

Notre Dame’s Been Down this Road Before

This is not the first time in recent memory Notre Dame has lost an upperclassman starter in the secondary forcing a youngster to play.  In 2012, Notre Dame lost projected starting CB Lo Wood in training camp and then starting safety Jamoris Slaughter in week three both for the season.  A freshman converted wide receiver named Keivarae Russell replaced Wood and another converter wide receiver, sophomore/redshirt freshman Matthias Farley, replaced Slaughter.  That worked out alright for the Irish.

Russell and Farley both went on to have productive collegiate careers for Notre Dame albeit with a detour for Russell thanks to his involvement in the academic scandal in 2014.  Neither player was truly ready for extensive roles in 2012, but they both played integral roles in Notre Dame’s #2 ranked defense and 12-0 regular season record.

One of the surprises of spring football was early enrollee Devin Studstull.  The Florida native turned heads and passed Redfield on the depth chart in April only to relinquish the role when fall camp began.  Studstill was a quick study in the spring and picked up VanGorder’s defense faster than most freshman allowing him to push the upperclassman with more experience.

Injuries have slowed Studstill down in camp a bit this fall, but the rookie was back on the practice field last week.  His timing could not have been better now that he will be thrust into the starting lineup.

Luckily for Studstill he will be lining up alongside veteran Drue Tranquill.  Tranquill knows the defense but is coming off ACL injuries in both his freshman and sophomore seasons.  Combining one safety coming off two ACLs alongside a true frosh isn’t exactly an ideal situation but the next time the Irish have an ideal situation coming out of fall camp it’ll be a first under Brian Kelly.

Studstill is an elite athlete and while he picked up the defense quickly, he will be just a true freshman and the likely target of opposing offensive coordinators.  How Brian VanGorder adjusts his defense – if at all – will be interesting to see with a rookie protecting the backend.

We haven’t heard much about 6th year senior Avery Sebastian this summer, but the graduate transfer who missed last year following an injury in the season opener could be in line for a much more prominent role with Redfield gone.  Sebastian has been playing at strong safety after he’s battled numerous injuries over the last few years which have impacted his explosiveness but having a savvy veteran watching over Studstill and backing him up could be ideal given the situation.

Prior to getting injured last year, some thought Sebastian had a chance to start for the Irish in 2015.  He got hurt against Texas though and never saw the field again.  After being granted a 6th year of eligibility, Sebastian has one final chance to make his mark and Redfield’s dismissal could make that happen.

How much Notre Dame can get out of Sebastian after all the injuries remains to be seen, but anything they can get would be a bonus given the sever lack of the depth they face at the position now.  Given Tranquill’s injury history though, Sebastian needs to be ready to play either safety position.

Other Freshmen in the Mix

Aside from Studstill, several freshmen among the seven defensive backs that Notre Dame signed in 2016 could be in line for playing time/reserve roles for Notre Dame.

It’s a shame that Notre Dame’s wide receiver depth took such a hit this off-season with the early departure of Will Fuller and the early retirement of Corey Robinson.  Typically you could look to your wide receiving corps for secondary help as many collegiate wide receivers also played in the secondary in high school. No obvious candidates standout for Notre Dame and even if they did they would be robbing Peter to pay Paul at this point.

Notre Dame has enough talent and pieces on defense to sustain the loss of Max Redfield, but their depth is now at perilous levels.  If Notre Dame suffers any sort of serious injury they will be in really rough shape.

On the bright side, Notre Dame is not facing many teams with established quarterbacks this year.  Michigan State and Stanford specifically are replacing Conor Cook and Kevin Hogan this year.  None of its September foes come in with elite quarterbacks either which will allow for Studstill and the other young safeties some time to get their feet wet.

Next man in is starting early for Notre Dame in 2016.