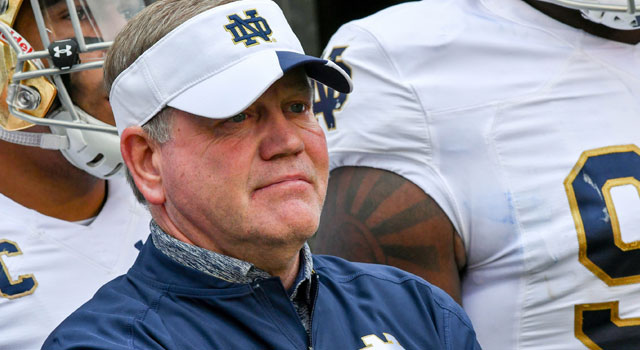 Notre Dame fans have had very little to cheer about this fall, a fact that finally began to change Saturday afternoon against Syracuse in New Jersey.  Notre Dame’s defense surrendered piles of yardage and 33 points, but the defense won big on a very important statistic: third down.  Newly appointed defensive coordinator Greg Hudson held Syracuse’s up-tempo offensive attack to a 20-percent conversion rate on third downs, providing Notre Dame’s offense enough opportunities to put the game away.  While the defense is far from fixed, it was stabilized enough to draw attention to other areas of concern that have plagued Notre Dame since head coach Brian Kelly’s arrival.

Leading 33-20 with less than sixty seconds to go until halftime, Notre Dame was in strong position to demoralize a Syracuse team that had been surprisingly frustrated by the Irish defense.  The momentum was short-lived, however, as Syracuse’s Brisly Estime returned a Tyler Newsome punt 74 yards, setting up a Syracuse touchdown drive that took only eight seconds to make the game 33-27.  While Notre Dame’s special teams played an important role on Saturday with C.J. Sanders’ 93-yard kickoff return for a touchdown, and Cole Luke taking a blocked extra point the distance for two points, overall the special teams unit has been extremely costly this season.

Notre Dame came out energized against Duke and took a quick 14-0 lead after an 8-yard DeShone Kizer scramble and a 44-yard strike to Kevin Stepherson.  The momentum of the game was completely altered after Duke running back Shaun Wilson took the ensuing kickoff 96 yards for a touchdown, bringing the Blue Devils back into the game and signaling the beginning of the end for the Irish.

A similar situation unfolded against Michigan State.  Notre Dame started the game with a C.J. Sanders kick return for a touchdown that was negated by a penalty.  Then, in the middle of the second quarter and leading MSU 7-0, the Notre Dame defense forced a Michigan State punt.  Miles Boykin fumbled the return – which was ultimately recovered by the Spartans – leading to a one-play, 38-yard touchdown pass to Donnie Corley that began the Michigan State landslide victory.

What’s shocking about these numbers is that Kelly was extremely successful on special teams while at Cincinnati.  At one point during his tenure in Cincinnati the Bearcats even led the nation in net punting, with the Cincinnati Bearcats’ website stating Kelly “believes in a strong special teams unit”.  Yet while at Notre Dame Kelly has appeared visibly agitated when asked about special teams by the media.

What can be done to fix the situation?  The first step is to take a closer look at specials teams and tight ends coach, Scott Booker.  In addition to abysmal play on special teams, Notre Dame has been on a downward spiral with its tight end production since Booker took the helm in 2012.  In 2015 Notre Dame’s tight ends only managed to record 19 receptions for 226 yards and one touchdown.  This season the tight end unit has been limited to 5 receptions for 65 yards and one touchdown, production that would have been pedestrian for Tyler Eifert in one game when he wore a golden helmet.

The run blocking hasn’t been much better.  Up 23-13 on Syracuse late in the first quarter, Brian Kelly opted to go for it on fourth and goal from the one-yard line.  Kizer handed the ball to Dexter Williams who popped to the outside before being stuffed by two Orange defenders that gained penetration after Nick Weishar whiffed on two blocks.

The 2016 season, although still in its infancy, has been one of deep reflection for Brian Kelly, and this offseason a comprehensive audit of what is and isn’t working within the Notre Dame program will need to take place.  One of the key components of that internal evaluation will have to be whether Scott Booker has done enough in his time in South Bend to warrant being present for the 2017 season.