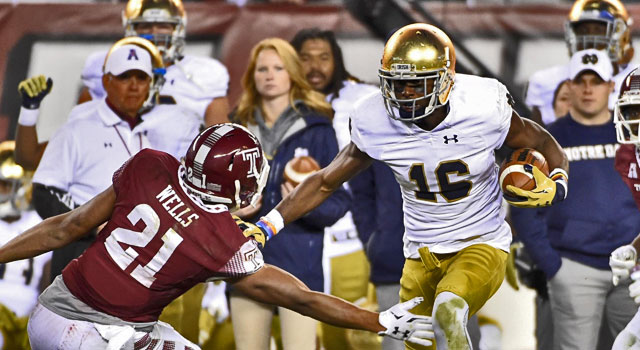 As winter continues to make way for spring – Daylight Savings is a few short days away for those living in sun-deprived areas like me – Notre Dame’s spring practice session is right around the corner. In preparation for the return of football UHND has begun to outline the most pressing issues facing the program, such as how Notre Dame intends to generate a pass rush in 2016. This week will preview the new faces at wide receiver after all three starting wide receivers – Will Fuller Chris Brown and Amir Carlisle – either graduated or departed for careers in the NFL.

The 2015 season was a productive one at wide receiver for the Irish. The wide receiver corps accounted for 241 receptions and 3,364 yards while chipping in 25 touchdowns, totals strong enough to make Notre Dame the No. 35 passing offense in the nation. The biggest loss will certainly be Will Fuller, who opted to forego his final season of eligibility after posting 1,258 receiving yards and 14 touchdowns. Fuller possessed the kind of speed Notre Dame had been searching for since the days of Rocket Ismail, a point driven home during the recent NFL Combine when Fuller recorded the fastest 40-yard dash time at his position with 4.32 seconds.

How does Notre Dame replace a rare talent like Fuller? The simple answer is they can’t, at least not in terms of individual skill. But what Notre Dame can do is replace that individual talent with depth of talent. And below is a list of three likely candidates to fill the void left by Fuller, Brown and Carlisle.

There was a lot of buzz when Will Fuller’s recruiting class arrived to campus during the summer of 2013, and believe it or not that buzz had nothing to do with Fuller. It was Torii Hunter that had the attention of recruitniks. The talented Texan had developed a reputation as an under-the-radar gem Notre Dame had managed to steal from under the noses of the Texas schools thanks in part to Hunter’s dominant performance at The Opening, one of the premier gatherings of top high school football, where he captured MVP honors. And although he suffered a broken femur at the U.S. Army All-American Bowl practice that forced him to miss his entire freshman season, the expectation was Notre Dame landed a star in the making at wide receiver.

Three years later and Irish fans are still waiting for that star to shine. To date Hunter has amassed 35 receptions for 428 yards and 3 touchdowns and has yet to have a breakthrough season. And while injury has certainly played a role, one has to also wonder whether his status as a dual-sport athlete with Notre Dame’s baseball team has limited his development.

The former The Opening MVP will have an opportunity to lock down a starting position either in the slot or on the outside, and Irish fans should keep a close eye to see if he emerges.

Equanimeous St. Brown is a bit of a mystery at wide receiver. Standing at 6-feet-4 inches, St. Brown possessed a very similar body type to former Notre Dame great Michael Floyd coming out of high school, and managed to impress teammates in practice during his freshman season.

That sentiment was shared by starting safety Max Redfield.

“He has a chance to become a dynamic receiver and possibly one of the best receivers in the country. It’s all about developing that confidence and experience.”

It’s the experience component that is the unknown with St. Brown, who hauled in only one reception for 8 yards last season. But his potential has been well documented, and St. Brown will have a chance to lock down one of the starting outside wide receiver spots in Will Fuller’s absence.

Last summer UHND wrote an article debating whether Corey Robinson was ready for greatness. The thought process was as follows: Robinson had a surprisingly strong freshman season and managed to surpass Chris Brown during his sophomore campaign – Robinson had 40 receptions to Brown’s 39 – yet Robinson faded at the end of the 2014 season while Brown began to establish himself. Who would win the No. 2 spot behind Fuller? Looking back, the debate appears to have been a foolish one. Chris Brown soundly won the starting spot opposite Will Fuller while Robinson slid dramatically, dropping his production from 40 receptions to only 16.

Given his experience Robinson will likely get the first shot winning a starting position but it’s far from guaranteed, particularly with the wealth of young talent waiting to get onto the field. Miles Boykin and Corey Holmes will have a chance to make some appearances this year as well as incoming freshmen Chase Claypool, Javon McKinley and Kevin Stepherson, all prospects the Notre Dame coaching staff was extremely high on. And C.J. Saunders could potentially make some noise at the slot position, giving Notre Dame flexibility to move Torii Hunter Jr. to the outside.

The wide receiver position may be lacking in individual talent on caliber with Will Fuller but it’s an extremely deep and talented group, and it will be difficult for opposing defenses to cover them all in four and five wide receiver sets. Unlike some of the other issues Notre Dame will face this spring at safety and linebacker, the wide receiver situation will be fun to watch unfold.

Scott Janssen is a blogger for the Huffington Post and has authored several nationally-featured articles, including an appearance on MSNBC as a sports contributor. He talks football 24 hours a day, much to the chagrin of his wife and those around him. Scott can be reached at scottjanssehp@gmail.com or follow him on Twitter.