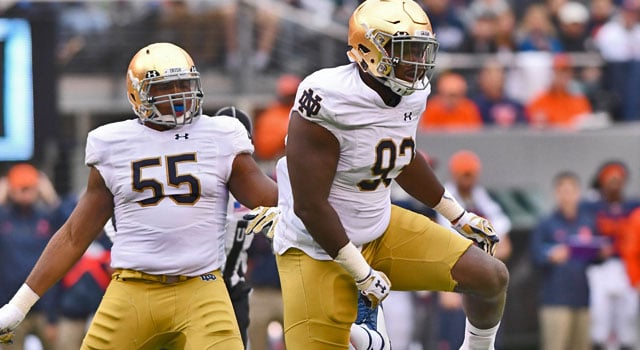 Notre Dame got back on the win column Saturday with a 50-33 victory over the Orange from Syracuse.  It wasn’t always pretty and the Irish were still sloppy in some areas, but after the loss to Duke, any win feels great.  The Irish now sit at 2-3 and for at least a week, Rome isn’t burning.

1. The defense was better but still a major work in progress. Notre Dame’s defense didn’t suddenly become the 1986 Bears by firing Brian Vangorder and installing an interim defensive coordinator on Sunday, but they did look better then they did a week ago.  They still missed some tackles and left some receivers open, but for the most part there weren’t the same blown coverages that were common the first four weeks of the year.

Amba Etta-Tawo did score on a 72 yard touchdown but that was more a result of a true freshman, Julian Love, just making a bad play on the ball.  Love won’t make that play again with more experience.  Speaking of the freshmen defensive backs, there were a few instances where their inexperience showed where more seasoned defenders could have had turnovers.  Donte Vaughn played a lot along with Love and Jalen Elliot and they look like they have some promise.

Jay Hayes was on the field a lot on Saturday as well and raised questions as to why he wasn’t on the field earlier.  Jonathan Bonner played more than normal and made some plays as well.

Most importantly, after a rough start, the defense settled in and gave up just six points in the second half.  Take away the seven points Syracuse scored after starting one drive at the ND 14 yard line and they played about as well as could have been expected considering how they were playing and how much change took place this week.

Notre Dame’s defense stopped taking steps backward on Saturday and nudged forward just a tiny bit.  Now, can they do the same next week and keep improving?  We’ll see.

2. Notre Dame’s offense is becoming very much hit or miss.  Notre Dame scored on three 50+ yard touchdown passes and a 50+ yard touchdown run.  What was missing, however, were long, sustained drives in which the Irish methodically marched down the field.  We saw this a bit last week too.

Notre Dame is having issues having sustained drives this year because of the offensive line has been uneven all season long.  The line was expected to be a strength but it’s not opening up running lanes for the Irish ground game.  At the same time, Notre Dame’s rushing attack has become almost exclusively horizontal with zone reads.  While Brian Kelly keeps working with the defense, the Mike’s (Sanford and Denbrock) need to brainstorm ways to take advantage of Notre Dame’s size in the middle of the line.

Red-zone play calling continues to be frustrating as well. With a 1st and goal from the 10 in the second quarter, Notre Dame called three straight runs to the perimeter that took them to the one.  Facing 4th and goal they called another perimeter run and got shut down.

4. Special teams teams we’re really uneven… again.  It was interesting reading some Syracuse blogs after the game and seeing them say Notre Dame dominated special teams because I walked away from this one feeling differently about Notre Dame’s special teams.

On one hand CJ Sanders picked up his first return touchdown of the season and Jarron Jones blocked ANOTHER PAT that was returned for two points (side note: heck of a play by Luke on that to scoop and score without losing balance or getting caught). Chase Claypool made a heck of a play to down a punt at the Syracuse 1 yard line as well.

On the other hand though, Justin Yoon missed another field goal under 40 yards and the Notre Dame punt coverage units – outside of the Claypool play – were down right dreadful.  Notre Dame gave up a long return at the end of the first half that resulted in a short field for the ‘Cuse offense and then another one in the third that the Irish defense helped erase.

Yoon’s struggles might be the most concerning though.  The sophomore struggled in camp before reportedly getting his grove back, but he is now just 4 for 7 on the season.

5. Deshone Kizer can’t walk on water.  Read the message board here and you would think Deshone Kizer played a terrible game.  Quite the opposite really.  Kizer set a Notre Dame record for passing yards in a win with 471 (3rd most ever by a ND QB) with three touchdowns through the air and another on the ground.  He now has accounted for 20 touchdowns through five games this year.

Kizer wasn’t perfect.  That is probably the one legitimate grip a Notre Dame fan can have.   He threw a bad pick and missed a wide open Kevin Stepherson at one point for what should have been an easy touchdown.  He does seem to go into funks in second quarters this year too for some reason.  He’s been lights out in the first but then cold in second quarters before rallying back.

His second quarter miscues this week nearly cost the Irish though.  In the final minute of the first half Kizer had the Irish on the move with the chance to go up 20 heading into the half.  Instead, Kizer took a bad sack to knock the Irish out of field goal range. Then after that bad punt return set up an easy Syracuse score, Kizer threw a pick that nearly gave the Orange another three points.  Luckily they missed the field goal attempt.

I still say Kizer is playing like a kid who think he has to be perfect and has to win a game by himself.  He alluded to as much last week when he said he took the fun out of being the quarterback of Notre Dame.  Kizer took a step forward Saturday but like the rest of the Irish, he is still a work in progress.  And that’s OK.

What is also becoming very alarming is the lack of broken tackles.  Josh Adams rarely went down on first contact last year, but he just isn’t running through the same arm tackles he did a year ago.  Facing a 3rd and goal in the second quarter, Adams had what looked like a touchdown if he could just shake an arm tackle from a Syracuse safety.  He couldn’t.

If Notre Dame really wants to salvage this season, the ground game has to get going at some point.  The numbers looked OK yesterday thanks in large part to Dexter Williams’s highlight reel worthy 59 yard touchdown run and some late runs once the game was essentially over, but when Notre Dame tried to run early, they struggled to do so.