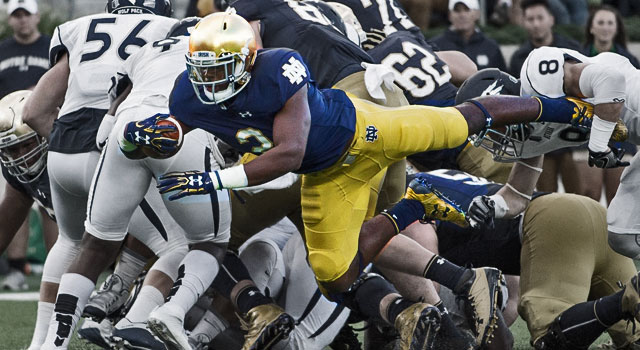 After a volatile  week one for the Notre Dame football team, week 2 brought a return to normalcy against the Nevada Wolfpack  with a 39-10 win in the first game at Notre Dame Stadium in 2016. The Irish entered the contest as 28 point favorites over the visitors and Las Vegas showed once again that they know what they are doing with Notre Dame securing a 29 point victory. Unfortunately, the win did not come at no cost, as the Irish defense lost starting left corner Shaun Crawford to a season ending injury for the second year in a row, this time to a torn Achilles tendon. It’s an incredibly tough blow to the defense, as Crawford was one of the rising stars, but even tougher on the player, who battled back from a torn ACL suffered last fall. If we never have to see another Notre Dame player in tears on the sideline with a slew of teammates offering condolences and support, I’m sure that would be fine by all of us.

One of the biggest laments from last season was Notre Dame’s inability to a.) convert in short yardage on third down and b.) score touchdowns when in the red zone. Particularly at issue was Notre Dame’s inability to run the ball in short yardage, with them converting a first down running on third and between 1-3 yards just 57% percent of the time. By comparison, Ohio State, Clemson and Stanford–Notre Dame’s three losses last year–converted on 66%, 68% and 65% of those same opportunities. So far in two games of 2016, the Notre Dame running game is at 100% in those situations. Clearly a small sample size (they are four of four), but being able to run for first downs on third and short was a major problem for the offense last year. It’s something to feel good about as Notre Dame gets into the meat of the season.

Similarly, Notre Dame’s red zone struggles were well documented last year and the early returns on this front are very positive. They are so far 8-11 on red zone opportunities converted into touchdowns on the season, with DeShone Kizer showing major improvement in this area. Last season Kizer was a 47% passer in the red zone, with 11 touchdowns and 5 interceptions. This year he has improved to 80% passing with 5 touchdowns and no picks. Red zone decision making was one of the distinct weaknesses in Kizer’s game last season, if he continues his higher efficiency in that area that bodes extremely well for Notre Dame’s long term prospects.

What percentage of fans saw Dexter Williams carry the ball on Saturday and thought, “This guy needs more carries, and they shouldn’t be at the expense of Josh Adams”? 90%? 100%? It’s a tough spot for Brian Kelly and running backs coach Autry Denson. Tarean Folston is clearly a guy the team respects and given his ability to run inside, he should absolutely have a role on this team. The issue is, it appears that Williams is a more explosive version of Folston and seeing him pound into the middle, bounce outside then outrun a safety to the end zone was nothing short of eye opening. This is not a garbage time player, he’s a potential difference maker and offers an explosive element to the running game that was lost when CJ Prosise took his talents to the NFL.

Josh Adams as a star:

Last season Adams was a freshman sensation, but was able to flourish due to an offensive line that opened up gaping holes. And to his credit, when they gave him a crease, he destroyed defenses. He was one cut and go. Adams was given no sort of free ride last Saturday on his 43 yard run in the 3rd quarter, on what was likely the best run of his career. I counted six missed tackles, four jump cuts and a burst away from defenders where only the sideline saved them. If he is going to show that kind of aptitude running the ball, there may very likely be a 1,000 yard rusher on this team, even given the stable of backs Notre Dame possesses.

The school that recently produced NFL first and second round talents Anthony Fasano, John Carlson, Kyle Rudolph, Tyler Eifert and Troy Niklas can’t seem to find a role for their tight ends in the passing game and this is not a new development. Starting with Tyler Eifert in 2012, the receptions for the leading tight end have drastically decreased, going from 50 to 32 to 30 to 13 last season. So far this season, Durham Smythe has one catch for eight yards, and the tight ends didn’t register a single target in last Saturday’s game against Nevada. Obviously, the loss of sophomore Alize Jones to academic suspension before the season was not going to help, as he was expected to be a major part of the offense. That said, Durham Smythe and Nic Weisher are both former four star recruits. Can Notre Dame really go an entire season without the tight end being a key part of the passing game, as was the case last season? Tight End U is turning into Tight End Who? (I’ll show myself out)

The Effectiveness of Replay:

A.) The arm is not going forward.

B.) The ball goes backward.

This should not be very complicated.

Let’s mic up the head referee and the replay official. We need to hear the reasoning, because too many decisions appear to lack any semblance of it. Especially when Big 12 crews are getting suspended for being incompetent.

If Notre Dame’s defensive line is built for anything, it’s to play well against a team like Michigan State. What they lack in athleticism and dynamics, they make up for with size and strength. Jarron Jones, Daniel Cage and Jerry Tillery have been much better than numbers would indicate–Cage especially so–and against a power running team that doesn’t want to go quickly, their strength and girth should bring out their best qualities.

It also fits into the way Nyles Morgan and newly inserted WILL linebacker Te’Von Coney want to play. They are two thumpers that are more than willing to stick their noses into the mix and play physical. With James Onwualu playing the best ball of his career at SAM linebacker, this sets itself up to be one of the better matchups for the Irish defense this season from a style stand point. Whether or not it is good enough remains to be seen.

Michigan State plays a similar type of defense as Pittsburgh did last season; they love to press on the corners and play their safeties close to the line of scrimmage to take away the run. We all remember the numerous pass interference penalties Corey Robinson drew in 2013 on deep balls, and we saw how Notre Dame attacked Pittsburgh’s corners last season. While Notre Dame no longer has someone with the speed of Will Fuller, freshman Kevin Stepherson showed the ability to flat out run by someone playing off coverage. Michigan State, of course, will not be playing off coverage and the ability of guys like Stepherson, St. Brown and Hunter Jr. to get off the line and into their routes will play a big role in the offensive success.