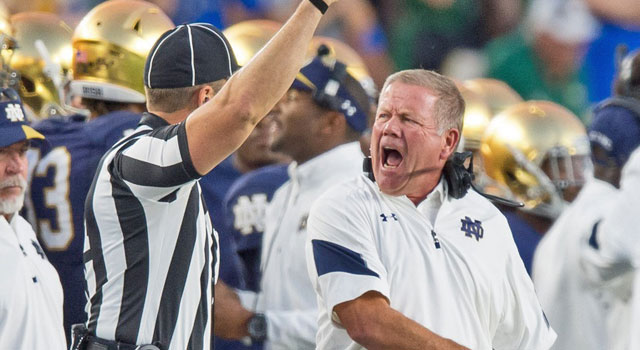 My wife is a market analyst for a financial firm in Southern California. She has described to me what it is like on the trading floor when the market takes a significant dip, or even something as bad as a crash, on more than a few occasions. Reports come in, numbers start tumbling, and for a brief time everyone just stares at their computer screens trying to take in all the implications of what those numbers mean, what can be done, and how bad the situation actually is. And, obviously, some people lose their heads. There is cursing. There is a sense of doom and a certain degree of fatalistic thinking. Wherever you were watching the Notre Dame football team give up 36 unanswered points in 17 minutes and 45 seconds of game action between the 2nd and third quarters, you were most likely going through a very similar experience.

It was swift. It was definitive. It was hard to watch.

Luckily, the market always corrects, and the same can be done for the Notre Dame team. But, the overview of the situation as of today is not pretty.

If you’ve got stock in the Notre Dame receivers or DeShone Kizer, you’re looking pretty darn good right now. Not simply because of the way they have played in the first three contests, but what is likely to take place over the remainder of the season. It’s become exceedingly clear that Notre Dame, on any given Saturday, will be required to score at least five touchdowns to win football games. It is also exceedingly clear that the Notre Dame offensive line, while still having immense potential to improve as the season goes on, is not currently playing at the dominant level that was seen last year. Kizer and the receiving core is the best thing going on the Notre Dame team right now (frankly, it might be the only good thing going on the Notre Dame team at the present time), and given the praise that has been heaped on Kizer from NFL scouts despite the poor start to the season, he might not be long as the Notre Dame starter beyond this season. Kelly needs to ride him, and Torii Hunter Jr., CJ Sanders and Equanimeous St. Brown have proven capable of shouldering the load as the focal points of the offense.

Brian Kelly should not be fired, nor is he likely to be fired. But, there are some disturbing trends regarding the direction the program is headed under his leadership that give one pause as to his long term future as the Notre Dame head football coach. Consider that in their last three losses–which have come in the last four games–they have trailed by 21, 17, and 29 points at some point in the contests. Consider that this was done with a quarterback who is in all likelihood going to be drafted in the top 5 of the NFL draft and has lost 4 of 5 to the likes of Kevin Hogan, JT Barrett, Shane Buechele and Tyler O’Conner.

Beyond the stats, it’s the admitted sloppiness that we’ve seen from Notre Dame in the first three weeks that is most troubling. A common contention among defenders of Kelly and those advocating for his dismissal are the expectations of the football program in general. Will Notre Dame ever be consistently elite again? And more importantly, can they be elite under Kelly? The argument usually devolves into someones schema over what it means to be elite and whether it is fair to hold the same expectations to Kelly as say someone like Lou Holtz, who excelled at Notre Dame in a vastly different college football landscape.

The bigger picture, though, is the expectation from any coach should be that he is getting his players and his team to play at a level that maximizes the talent that he has at his disposal. And it is in this area where Brian Kelly was so severely out-coached by not just Mark Dantonio on Saturday, but also against David Shaw of Stanford and Charlie Strong of Texas. There are real conversations to be had about the talent gap when Notre Dame loses to Clemson and Ohio State. What’s the excuse against Stanford? Or Texas that has been in shambles for a couple of years? Or Michigan State? Mark Dantonio didn’t just out-coach Brian Kelly on Saturday. He out-coached him in the spring and in the fall, when he was building his team. His team knows what it is, what it wants to do, and they executed that identity to perfection on Saturday. Notre Dame is more talented than Michigan State. This is true. If you keep the same rosters and just flip the coaches, Notre Dame wins by multiple touchdowns.

Brian Kelly is in trouble right now because his team is not sound in the fundamentals, something that is not said of Michigan State or Stanford. There were missed assignments all over the place on Saturday, on both sides of the ball. Special teams were an unmitigated disaster. There is no greater indictment of a football coach and his program that seven years in, on week three, you proclaim to have a sloppy football team. There is still time to fix it, but recent history suggests more trouble may be ahead.

It’s time. It’s just time. A lot of us were guilty in thinking this thing could be turned around on defense, myself included. I bought into the whole three years in the defense mantra that was sold to us in the preseason. I felt the upgrade at middle linebacker with Nyles Morgan coupled with a strong defensive line and an improved James Onwualu and a healthy Shaun Crawford would be enough for Notre Dame to be at least as good defensively as they have been. I was wrong, I was all wrong. The good news is I feel confident about the pieces that Notre Dame has defensively. Morgan and Coney can play ball. Jerry Tillery played his best game on Saturday. He moved the right tackle off of the earth on a second quarter run in route to a tackle for loss. Daniel Cage is a monster at times. Julian Love looked solid in his time on the field. Daelin Hayes is tracking tight ends with some serious Jaylon Smith type athleticism.

At this point, it’s all being wasted with poor technique and a lack of knowledge of what they are supposed to be doing. This has been the story of Brian VanGorder’s defenses since he arrived at Notre Dame, and it will continue to be the story until whenever he leaves. After how poorly Jaylon Smith was utilized last season, there is no reason to think that VanGorder will ever get the most out of whatever talent he has at his disposal, not when the most talented player he has ever and will ever have the pleasure of coaching was reduced to what Kelly called the “cleanup guy”. When a three year starter in Cole Luke–in the midst of the worst game of his career, in his 29th start at Notre Dame–can’t execute a simple coverage (as Brian Kelly put it) on a game deciding third down play, that in a nutshell is the failure of VanGorder and his defense.

It’s unlikely VanGorder will be asked to move on during the season–there would be too many moving parts and Brian Kelly would most likely have to take over the defense–but it is inconceivable that he would return next year. Given the number of players from last years defense who are now on NFL rosters, we really can’t blame the talent.

This young man is the future for the Notre Dame defense and while he is not likely to be developed in a way that is sufficient this season, just by being in the game and gaining invaluable live reps will be tremendously beneficial to his future. Obviously, heaping too much praise on a player early in his career can be counterproductive, but his pass break up that led to the Devin Studstill interception showed Jaylon Smith-like ability in coverage. Not only that, when have we seen a Notre Dame defensive back play the ball that well, let alone a freshman defensive end?

He seems to be a faster, more athletic version of Miles Boykin. Whatever Notre Dame wanted to do with Alize Jones from the W position this year, can they not do the same things with Claypool? What are we missing here?