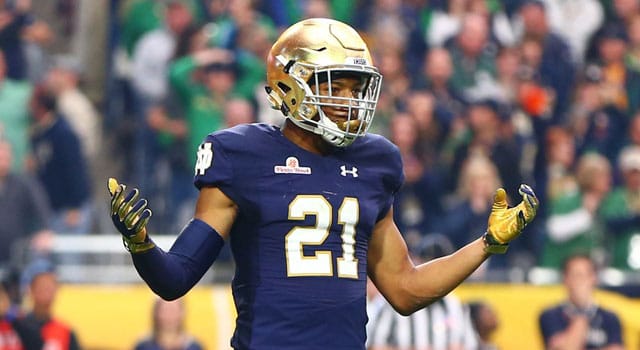 Notre Dame got its first good news on the cornerback front in months on Thursday when Brian Kelly revealed that Nick Watkins could potentially be back for the Fighting Irish in a couple of weeks.  Watkins has been out since the spring with a broken arm and the thought was he could be headed for a medical redshirt as recently as last week.

“There’s been some bone growth there.  That has been a positive sign for us,” Kelly said on Thursday.  “They’ll do a little more work next week and we’ll probably have a definitive word on him next week.”

The bone growth is significant because Watkins has a procedure over the summer to stimulate bone growth in the broken arm he suffered in the spring.  With the growth, Notre Dame could now potentially get the junior corner back just when they could use him the most.

Notre Dame lost sophomore Shawn Crawford for the season last week and his replacement, Nick Coleman, has struggled this season.  Behind Coleman the Irish depth chart features untested sophomore Ashton White and a host of freshman.

What is even more encouraging was Kelly’s statement’s on Watkins’ work in practice.  “He practiced really hard this week.  He was in a lot of football this week,” Kelly said.

Before Watkins can come back to full contact and even think about playing though, he needs to get cleared by the medical staff.  “We just have to get a green light that we’re not putting him in a position where he could hurt himself,” said Kelly on Thursday.

In terms of a timeframe for a potential return, Watkins could be just a couple weeks away.  “We’re hopeful, you know, maybe a week, two weeks, couple weeks,” Kelly stated.

If Watkins gets the green light, Notre Dame would likely still need to ease him back into action even though Kelly said that his volume has been high.  Watkins hasn’t been hitting and tackling for a long time and would need to catch up in a hurry.  of course, with all of the missed tackles against Texas one could argue he would fit right in even if he missed some tackles early.

Watkins filled in for Keivarae Russell and then Devin Butler in the Fiesta Bowl against Ohio State and while he did get beat at times, Watkins battled throughout the game and played pretty well for a first time starter against the kind of receivers he faced.

Notre Dame could certainly use positive injury for a change.  Hopefully the get the green light from the medical staff next week and can start working Watkins into game shape.  With Duke on tap next weekend followed by Syracuse there wouldn’t be a huge need to rush him back.  It sure would be nice to have Watkins back in time for Notre Dame’s trip to Raleigh October 8th to get him some reps before Stanford comes to town.

All of that, of course, is contingent upon Watkins getting medical clearance next week.