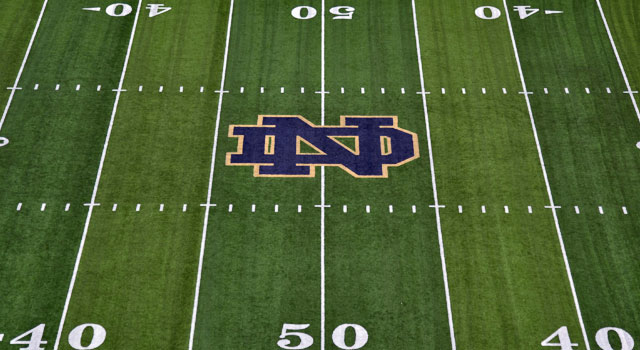 When Notre Dame fired Brian Vangorder on Sunday despite Brian Kelly’s apparent support for his defensive staff Saturday night, they surprised even more by handing the the reigns of the Irish defense to Greg Hudson – an Irish defensive analyst and former Purdue DC.   I reached out to Travis Miller of the Purdue blog HammerAndRails.com for some more background on the man tasked with patching up a defense that has imploded through four games this year.

Hudson, a defensive analyst, was hired without any fanfare this off-season after being fired as Purdue’s defensive coordinator following an unsuccessful three year stint running the Boilermaker defense.  During that time Hudson didn’t exactly produce stingy defenses.  In fact, his defenses ranked near the bottom of the FBS during that time.

“The best thing he did at Purdue was improve our linebacker player. For the first time in over a decade we have multiple real, live Big Ten linebackers,” Miller said over email this morning.  “Aside from that, his defenses were generally a mess.”

“I will give him a slight pass because they were often serviceable for a half to three quarters, but wore down because John Shoop’s offense couldn’t get out of its own way,” he added.  “Numerous three and outs led to the defense being on the field too long and wilting in several games.”

Ok, so maybe not so bad for Notre Dame.  The Irish do have a potent offense – when they aren’t turning the ball over – and the Notre Dame defense hasn’t been bad because it’s been tired.  It’s been bad because it lacks fundamentals, doesn’t generate turnovers, and features the worst pass rush in the FBS right now.

“His pass rush was inconsistent at best,” Miller told me.  “With all the great pass rushers Purdue has had no one every had more than four sacks in a single season when he was at Purdue. This is with two guys (Ryan Russell and Bruce Gaston) who eventually made the NFL.”

Ryan Russell was a 5th round draft pick of the Dallas Cowboys this past April and Bruce Gatson was undrafted and has bounced around eight different NFL teams in the past three seasons.  Gatson was on the Chicago bears active roster in 2015 registering 11 tackles and 1 sack.  Russell didn’t make the Cowboys 53 man roster out of camp but is currently a member of the Miami Dolphins practice squad.

“His scheme often had his corners playing 10 yards off receivers at the snap to avoid the deep ball,  but when you do that on 3rd and 5 it just means an easy conversion for the other team. His run defenses were beyond awful most of the time and Purdue was one of the worst teams in the country on 3rd down.”

Ok, so that is all of the bad news.  Miller did offer a glimmer of hope for Notre Dame fans.

“I tend to think Purdue’s struggles were caused much more by Shoop’s ineptitude, and maybe with better talent and an actual offense to help out will make Hudson better,” Miller said before cautioning, “But like many things we have seen under Hazell, things that were glaring issues in game one were still glaring issues and never addressed as recently as two days ago.”

At the end of the day, all of these comments are about what you could expect after a coach is fired after three years of underwhelming defenses and are a heck of a lot nicer than anything a Notre Dame blogger would be telling fans of wherever Brian Vangorder lands next.

What is at least somewhat encouraging here is that some of Purdue’s problems under Hudson’s watch came to an offense that didn’t possess the football or help the defense out.  As a fan of the Philadelphia Eagles, I am seeing first hand how much a defense can improve once an offense doesn’t hang them out to dry continually this season.  Hudson doesn’t have an off-season to fix problems though.  He has a week.

What is also very important to keep in mind here is that Hudson is the INTERIM defensive coordinator before Notre Dame fans freak out (we’d never do that right?).  Kelly’s only options to replace Vangorder mid-season like this were either current assistants or one of his defensive analysts (Hudson, Jeff Burris, and Bob Elliot).  Burris has never been a coordinator and Elliot’s health moved him into the analyst role a couple years ago so he likely wasn’t an option either.

Kelly went with the only coach he had readily available who has been a defensive coordinator whose voice the Notre Dame defenders haven’t been hearing throughout camp.  Perhaps some new ideas from a new voice sprinkled in with a lot of hands on involvement from Kelly will lead to some improvements.

Hey a guy can dream can’t he?  Oh hey look, a unicorn!