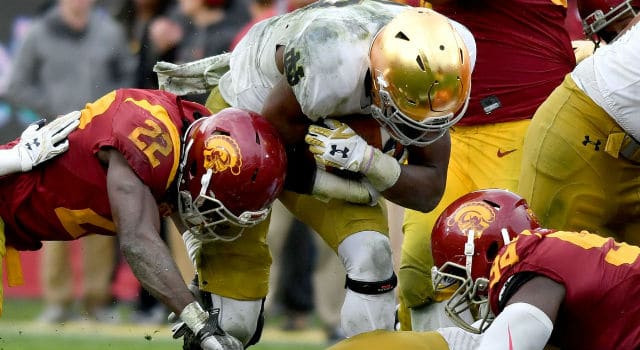 Back in August I made some over/under predictions for the Notre Dame offense and now that the season is over it seems appropriate that we take a look back and see how I did. It’s important to remember that when these guesses were made I was operating under the crazy notion that Notre Dame would be a playoff team (don’t laugh, you thought they’d be good too). That being said, the results were a mixed bag with some correct predictions and some that were way off.

Starts By The Quarterback Who Doesn’t Take The Field First Against Texas: 2.5

Turns out DeShone Kizer is a pretty durable young man. There is a lot to be said about how Kizer played this year, I’ve been pretty critical of him myself, but he certainly does not lack toughness. He was credited with 129 carries last year, which includes 28 sacks, and took several hard (illegal) hits that very easily could have cost him a game or two due to various injuries. And it’s a good thing too because it became apparent very quickly following the opener against Texas that Malik Zaire was not going to be down with being anyones fill-in guy. How many times did we hear the commonly used cliche that it was a good problem to have two quality quarterbacks who could start and win games in the preseason? Turns out these situations can be very toxic if everyone is not bought in and on the same page as far as what the ultimate goal is.

I ended up hitting on this prediction, but not for the reasons that I outlined, so in a way I was really incorrect. My thinking was given the depth at running back, the (supposed) strength of the offensive line, and the youth at receiver, Notre Dame would be very run heavy in 2016. Essentially I didn’t think there would be one bell cow back who got the bulk of the carries on a week to week basis. This turns out not to have been flawed thinking, Josh Adams came away with 58% of the running back carries, which is a plurality, but not Darius Walker type usage from 2005 and 2006. The problem was, it was basically Josh Adams or nothing. Backups Tarean Folston and Dexter Williams combined to average 10 carries a game and after week 1 against Texas, Folston broke double digit carries just twice–against Nevada and Army. Three complete games went by with Williams not carrying the ball at all, and in the final 6 games, Williams tallied a less than robust 12 carries. He totaled 39 carries for the entire season.

Folston and Williams combined for two more carries than Cierre Wood in all of 2012, who was the second leading rusher on that team. It’s interesting to imagine a reality where Notre Dame is forced to start Zaire, run the ball 50 times a game, and be a play-action passing team. Heck, this could have been the plan with Kizer under center. If only.

The stats are somewhat skewed on this one because Hunter Jr. missed three complete games due to injuries, plus most of USC.  If you project his season totals from the eight games he did play you’d come up with 57 receptions and about 5 touchdowns. Both well under what I set as the standard to start the season. His lack of production was not due so much to his poor play but the emergence of Equanimeous St. Brown who tallied a 58 reception, 961 yard, 9 touchdown breakout season. Essentially what happened is those two players shifted their expected roles, St. Brown to #1 and Hunter to #2. This gets back to the running back discussion up above, these two players would have been really good options and compliments to a running centric offense. They just weren’t the types of players who were ready to carry an offense a la Samardzija and Stovall or Tate and Floyd, but the offense was essentially designed to feature them on the outside. When looking back on what went wrong in 2016 one of the first places to look is the decision to feature an inexperienced receiving core with a good quarterback over a running game with a good offensive line and a stable of backs.

This prediction was solely based on the fact that after scoring one touchdown in all of 2015 (on a freakin fake field goal) just by statistical chance they’d see an increase in tight end touchdowns. It didn’t look good for a long time until Army decided they’d try the strategy of not covering the tight end at all and it lead to a two touchdown avalanche of tight end production. However, this position continues to under achieve after the combination of Durham Smythe and Nic Weisher were good for 12 receptions for 159 yards. They simply weren’t viable weapons on a game to game basis that made the defense feel threatened. The addition of Alize Jones will obviously help in this area, but significant improvement needs to be made, and may have to come from the coach in charge of this unit.

There’s making a prediction and being wrong and then there is whatever you want to call this disaster of a call. Obviously, this is just a big swing and a miss from how I thought Notre Dame would approach the season and how good this unit would actually be after losing three starters. To not even rush for 2,000 yards would have been considered unimaginable in the preseason. Granted, normally they’d have a 13th game to get over that mark, but with the type of backs that they have and a running quarterback in DeShone Kizer, it defies logic that this team would be 700 yards and a full 1.2 yards per carry worse than the 2015 squad. It’s hard to know how much to blame the line itself for it’s poor play and the approach to the offense that Brian Kelly decided to go with this season. It’s likely some combination of the two, Mustipher and Bars had some growing pains as first year starters and right guard never really got figured out. At the same time, this line was asked to do things that they weren’t best suited for as far as a reliance on pass protection. Generally speaking, offensive linemen who lack experience are always ready to pound people and play straight ahead. Instead, they were treated as though they were equal to the 2015 line and they suffered for it.