It’s generally best to predict any defense that is being led by Brian VanGorder to underwhelm and that sentiment certainly proved correct this season for a unit that finished (incredibly) at 45th in total defense. In hindsight it was a crime not to give an over/under on how many games VanGorder would last as the Notre Dame defensive coordinator, but in fairness to myself I was still soaking in the “third year in the defense” narrative and trying to conjure up ways that Notre Dame could somehow overcome losing Sheldon Day on the defensive line and the best linebacker in decades in Jaylon Smith.

Looking back, I think we all made a valiant effort to mask what we all feared: a defense that was ripe to get shredded through and through under a scheme that no one actually ever figured out. In the four games Notre Dame played with VanGorder leading the defense Notre Dame was 103rd in total defense and gave up 6.18 yards per play – also good for 103rd in the country.  The result? A 1-3 start with losses to 5-7 Texas, 3-9 Michigan State, and 4-8 Duke

Notre Dame gave up 454 yards a game and 33.5 points to teams that were a combined 17-30. Notre Dame brought in a defensive analyst that was 15th in total defense in October and 36th in November. In other words, a replacement level coordinator, essentially anyone at random, was 67 spots better on defense than VanGorder.

This defense spent the entire winter, spring, and summer working under VanGorder’s scheme. They never had a chance.

A disappointing number no matter who the coordinator was. They got run over by Texas and Michigan State, and Stanford–without Christian McCaffrey–got to 176 yards against them. The thinking going into this season was the lack of a pass rush would be mitigated by their ability to hold up against the run game; they lacked a ton of athleticism, but their girth would make them tough to push around.

Losing Daniel Cage to a concussion late in the year hurt this unit quite a bit and despite a ton of preseason hype, Jay Hayes never materialized as an impact player on this defense.

This defensive line was essentially Jarron Jones, Isaac Rochell and a bunch of other guys who played well in spots. The scary thing is both Jones and Rochell are finished with their playing careers and the disappointing Jerry Tillery has the most experience and pedigree returning on the line next season.

Whoever is coaching this group next season has some serious work to do with perhaps the most important part of any defense. There is some talented youth to work with–Daelin Hayes, Khalid Kareem, Julian Okwara and several incoming freshman–so the task is not impossible. But, if these guys don’t show a big jump, things could be ugly again in 2017.

It was a pretty good number set and the linebackers almost got there, but they came up just short. Funny enough, if I had set the same number for the entire defense they’d have only hit the over by 1.5 as they finished with 14.

Middle linebacker Nyles Morgan led the team with four,  and James Onwualu and Greer Martini tied for second with three a piece. This trend is likely to continue as the Irish have a good number of options and athletes at the linebacker position and not so much on the defensive line, as noted above.

As hard as it is to feel good about the defensive line, the opposite is true of the linebacker position. Morgan, Te’Von Coney, Martini and Asmar Bilal all return and all saw a ton of playing time this season as they finished 1st, 4th, 6th and 11th on the team in tackles respectively.

It would seem to make a lot of sense given the depth at linebacker that we’d see a lot of three man fronts on defense allowing the quartet on the field at the same time, especially in the interest of putting the best 11 guys on the field at any one time. It’d seem to make more sense to have Asmar Bilal or Greer Martini on the field than, say, Jonathan Bonner or Elijah Taylor in any given situation. If the Irish are to make any sort of real improvement next season, this is the group that is going to take them there.

It was a tough year for the secondary in terms of attrition.  Notre Dame lost Max Redfield, Shaun Crawford, Nick Watkins, and Devin Butler. On field performance suffered as they finished a more than respectable 24th in passing defense, but were aided by two option teams and a monsoon game against NC State where neither team could throw the ball. Subtracting those three games, the defense surrendered 250 yards a game, which would have come in around 91st nationally.

Youth plus a lack of a pass rush is what really doomed this unit as they were high on talent, but lacked cohesiveness. This is what you get when you take a bunch of raw players, throw them out there and say, “ok, lets see what we’ve got.” Julian Love, Donte Vaughn, Troy Pride and Devin Studstill all had their shining moments on the field, showing tremendous promise and one of everyone’s favorite words, moxie, Julian Love especially so.

The freshman corner was 8th on the team in tackles, recorded an interception, forced a fumble, and recovered another. He also hit a number of guys really hard in a way that didn’t make the refs want to eject him, which is a very useful quality these days. He flashed on several occasions and showed the type of leadership the latter half of the season that prompted many to levy the future captain moniker onto his shoulders.

In all, freshmen in the secondary accounted for three interceptions, nine passes broken up, and 130 tackles. The hope is that the experience gained will pay dividends next season and beyond, and coupled with the hopeful additions of Shaun Crawford and Nick Watkins from injury, will be the makings of a very talented unit. Of course, this is all pre-supposing that Brian Kelly will hire a defensive coordinator who has it in his mind to teach something that resembles the fundamentals of football. But, we are in the trust but verify portion of his tenure. 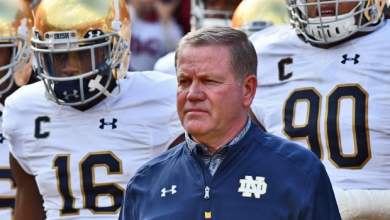