February is the hardest month of the football calendar. College football fans suffering the effects of withdrawal after the end of bowl season are given a brief reprieve until early February when the Super Bowl officially wraps up the football season. And while games won’t start anew until late August, spring football is only a few short weeks away, and UHND will preview the major challenges confronting the Notre Dame program heading into 2016. The first challenge is arguably the most daunting: how will Notre Dame generate a pass rush?

If you were one of the 111.9 million viewers of Super Bowl 50 you witnessed what an effective pass rush can do. NFL MVP Cam Newton was hit nearly as many times as he completed passing attempts as the Denver Broncos did to Carolina what they had done to New England in the AFC Championship two weeks prior, a game in which star quarterback Tom Brady was either sacked, hit or hurried 41 times. While Peyton Manning winning a championship in what is likely his last season was a great story line, the truth is the Denver Broncos are Super Bowl champions because of their pass rush. And a major contributing factor as to why Notre Dame has failed to enter the top echelon of football programs is because of its lack of one.

Over the past three seasons Notre Dame has never been higher than No. 74 nationally in team sacks, tying with the likes of Western Kentucky, Nevada and Hawaii and trailing the likes of Eastern Michigan and Louisiana-Lafayette. Notre Dame accumulated 25 team sacks last season with only four players recording more than one sack. Defensive linemen Romeo Okwara and Sheldon Day accounted for nearly 50-percent of total sack production, and with both having exhausted their eligibility, a serious question remains: how does Notre Dame replace the most productive pieces in what was overall a mediocre pass rush?

Defensive line coach Keith Gilmore is an impact coach. After attending a spring practice session last year I wrote this about Gilmore:

“New defensive line coach Keith Gilmore is a really impressive coach. I wasn’t entirely sure what Notre Dame had landed in the former North Carolina line coach, but all skepticism was removed this weekend. Gilmore is an engaging and laid back personality who will recruit very well at Notre Dame. The hand drills being run were even more exciting, and I fully expect the defensive line to penetrate effectively this fall. Notre Dame should have a lot more tackles for loss this season.”

Gilmore’s emphasis on hand technique and getting off blocks made last year’s prediction come true. Notre Dame jumped from No. 75 in the nation in tackles for loss to No. 54 in just one year, and increased their overall production by 15-percent.

The new defensive line coach has also proven capable of getting the most out of his players. The scouting report on Romeo Okwara was one of a raw athlete with lots of pass rush potential that had been unable to translate that potential to on field production. After three seasons at Notre Dame Okwara had only managed 4.5 career sacks, yet in one season with Gilmore Okwara nearly doubled his career total with eight.

Keith Gilmore will have his work cut out for him this season. The two most likely candidates to fill the weakside defensive end spot vacated by Okwara are junior Andrew Trumbetti and senior Doug Randolph who, combined, have two career sacks. The prospects aren’t much better at Will linebacker, the former home of likely first round NFL Draft selection, Jaylon Smith. Sophomore Te’Von Coney registered 13 tackles his freshman season and Josh Barajas redshirted, offering extremely limited experience at the position.

The x-factor will be the addition of five-star outside linebacker Daelin Hayes, who was listed as the No. 7 outside linebacker in the nation according to Rivals.com. Measuring in at six-feet-four inches and weighing 249 pounds, Hayes has the size to contribute early and has drawn comparisons to NFL star Justin Tuck. And his status as an early enrollee will only accelerate his acclimation to the college game. But questions remain regarding his ability to make an impact as a freshman. Hayes suffered a labrum injury that forced an early end to his senior season in high school, and the Notre Dame coaching staff has yet to determine if his future will be at Will linebacker or weakside defensive end.

If it appears the pros are outweighed by the cons it’s because they currently are. Notre Dame has far more questions than answers heading into the spring practice session. And the news has only become worse.

The one silver lining to Notre Dame’s pass rush was its future with Daelin Hayes and the commitment of Robert Beal, a four-star prospect rated as the No. 2 weakside defensive end in the nation for the Class of 2017. The combination of Hayes and Beal would have finally given Notre Dame the pass rushers it has coveted since head coach Brian Kelly’s arrival, which made the news of Robert Beal’s recent decommittment all the more devastating.

The answer to where Notre Dame’s pass rush will originate, unfortunately, is unknown. And the battle for the weakside defensive end and Will linebacker positions is one Irish fans should keep a close eye on this spring. 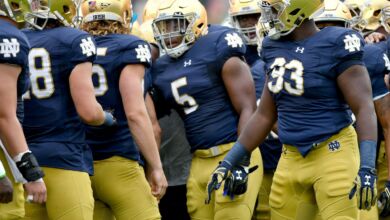