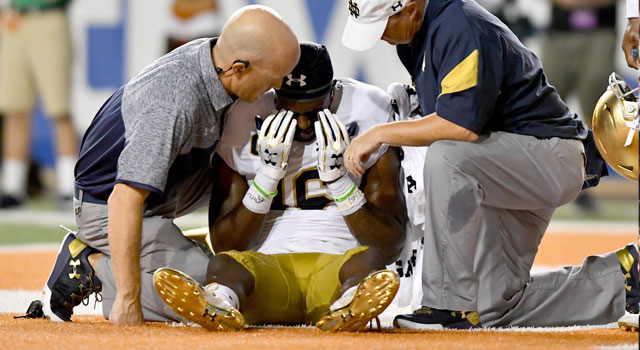 In a game of big plays, one of the biggest plays in Notre Dame’s crushing season opening loss was the missed targeting call on wide receiver Torii Hunter Jr.  The senior wide receiver looked like he was about to secure a go a head touchdown when he was maliciously hit in the head by Texas defensive back Deshon Elliot.  No flag was thrown, no review of the play was called for.

When asked about the play at the end of the game, Brian Kelly didn’t mince words.  “Obviously very disappointed we lost Torii Hunter to a blow to the head.  It wasn’t even reviewed which doesn’t make any sense to me,” said Kelly.  “I’ve been in this game a long time and I know when someone gets hit in the head – and he was certainly hit in the head in that play in the end-zone.”

“Just unfortunate that it wasn’t officiated or reviewed in a manner I thought it should have been,” Kelly added.

When asked about the discussions he had with the officials regarding that play Kelly’s only response was, “Heated.”

At the time of the play Notre Dame trailed Texas 31-28 and a targeting call would have set Notre Dame up with a first and goal.  Without the blow to the head, Hunter looked like he would have come down with the catch to put the Irish up.

Instead of facing a first and down, however, Notre Dame lined up for a field that ended up getting blocked by Texas.

Some – mainly Texas fans based on their reaction in the stands – will scoff at the notion that the play should have been called targeting, but based on reviewing the play, it looks like a clear cut case of targeting if their ever was one.  Considering officials are told that “if it’s questionable” it’s targeting; it seems pretty obvious that it should have been called.

Hunter’s status for next week against Nevada is up in the air now.