Ugly Stats from Another Ugly Loss: Beyond the Boxscore Virginia Tech 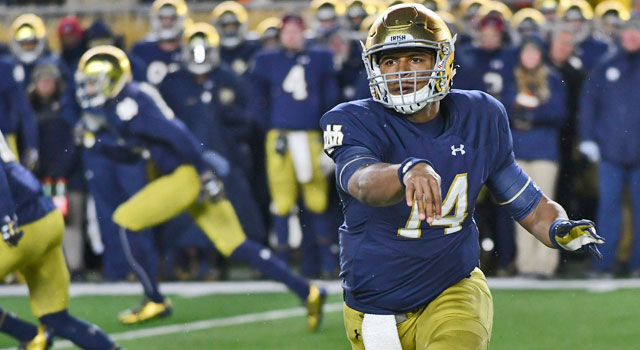 The goal of earning a spot in a bowl game came to an end in South Bend on Saturday as Notre Dame watched a pair of 17-point leads fade away in their 34-31 loss to the Virginia Tech Hokies. They held a 24-7 lead with six minutes to go in the second quarter and then watched their offense collapse. The defeat drops them to 4-7 on the year with one game left to end this disappointing campaign on a bright note

Time Was the Essence

The Irish scored on their first three series and after the third tally, held a commanding time of possession advantage: 12:36 to 2:31. For the remainder of the first half, the Hokies controlled the ball with a 9:56 to 4:57 advantage. That 2-1 ratio remained over the entire course of the second half, with Virginia Tech having a 20:18 to 9:42 lead in this category. The numbers were particularly notable in the final quarter, with a 10:43 to 4:17 lead, as the fatigue factor for the defense could be an explanation for the inability to make stops when needed.

The one highlight of the second half for the Notre Dame offense was a 67-yard scamper by Josh Adams that gave the Irish a 31-21 lead with 3:49 left in the third quarter. Prior to the ill-fated final drive, the offensive unit had been missing in action since returning to the field. In the other 19 plays besides the Adams run up to that point, the Irish offense managed a weak 21 yards.

Just a Blip on the Radar

The total impotence when it came to offense was reflected when taking a closer look at the Notre Dame drives in the second half prior to that last-ditch effort. One scoring drive and five others that went nowhere, with four of the five ending up as three-and-outs. The other one gained a first down, yet managed just seven yards in four plays. The two first downs were matched by the two penalties called on the Irish.

DeShone Kizer was dominating on the first four scores for the Irish, completing 10 of 12 passes for 155 yards and a pair of touchdown passes. For the remainder of the contest, his numbers were anything but top-notch, completing just six of 21 passes for 80 yards and no scores. Consistency problems across the board have marked the 2016 Notre Dame season, but Kizer is still being discussed as perhaps the top pick in next April’s NFL Draft. That’s an issue that could end up costing him money.

Closing the book on 2016 can’t come soon enough for the Irish fan base. Yet a trip to the Los Angeles Coliseum to face their longtime rivals, the USC Trojans, remains on the schedule for next Saturday and will officially end this season