Notre Dame came out on Saturday and put a beating on Navy like we haven’t seen in a while.  The Irish jumped out to a 52-10 lead early in the fourth quarter before Navy added a couple of late scores to reach 20 points with a 52-20 final, but the story of the day was Notre Dame’s offense slinging the ball all over the field and Clark Lea‘s defense shutting down Navy’s pesky triple-option attack.  The Irish improved to 8-2 on the season and added a New Year’s 6 resume-boosting blowout of a team ranked in the top 25.

Ian Book led the way for the Irish offense with his third five-touchdown performance of the year.  Four of those scores went to senior Chase Claypool who tied Maurice Stovall’s single-game school record of four receiving touchdowns.  Navy meanwhile couldn’t stop turning over the ball throughout the game as the Irish defense completely neutralized Navy’s option.

We;ll have more on this one, but for now, here are the full highlights (all 16 minutes of them) from this beatdown.

Beyond the Boxscore: Breaking Down Notre Dame's Blowout of Navy 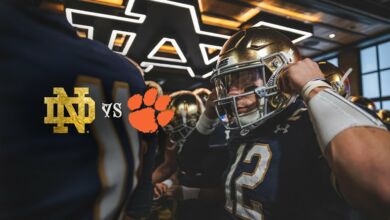