Notre Dame finished its 2019 season on Saturday with a convincing 33-9 victory over Iowa State in the Camping World Bowl giving them 11 wins on the season and propelling them into the off-season with a lot of momentum.  The final destination of 2019 wasn’t what anyone wanted, but the Irish ended their season on a winning note with a lot to like in a game they could have mailed in, but didn’t.  Let’s jump into the final 5 things I liked of the season.

This team had every reason to pack it in for the Camping World Bowl.  No one really wanted to be in this bowl game.  Hell, my wife, who grew up around college football in a Texas A&M family, said to be yesterday morning, “I’ve never even heard of this bowl.”  A year after going to the College Football Playoffs and starting the season in the top 10, this team could have easily mailed it in.

If you listened to Twitter or the various media reports and podcasts throughout the week, you would have thought they did just that too.  We heard all week Notre Dame was practicing poorly and didn’t want to be in Orlando.  Well, it looks like all of those reports were greatly exaggerated.  Even Brian Kelly got in on it though telling the media that he needed to see more out of his team.  It was truly Holtzian of him to use the media to motivate his team like that.

Back to the seniors, though.  On the first punt of the game, Alohi Gilman forced a fumble that Chase Claypool recovered.  Gilman’s is probably headed for the draft, and after yesterday, Claypool looks like he could sneak into the 1st round of the draft.  Yet there both were balling out. Khalid Kareem got banged up a couple of times yesterday but kept on going back out there to secure the win.

In an age when NFL bound stars sit out bowl games, Notre Dame’s seniors played their hearts out on more time. Credit them for putting their teammates and their school above themselves, but don’t forget to credit Kelly for creating a culture in the program that produces that selflessness.  Good luck to all of the seniors and underclassmen who played their last games in Notre Dame uniforms yesterday.  They made everyone who put on that uniform before them proud yesterday.

There was not a single pre-season narrative that turned out to be more exaggerated than Jonathan Doerer’s ability to replace Justin Yoon.  Doerer looked beyond shaky in the spring, and early reports out of camp said that he was being challenged by freshman walkon Harrison Leonard.  All Doerer did this year was go out and connect on 17 of 20 field attempts to finish third in the country in field goal percentage.  Many of us thought that Doerer would just be used for chip shots because he was a liability, right? Couldn’t have been further from the truth.

On Saturday, Doerer capped off his impressive season with a 4 for 4 effort, including kicks from 39, 51, 19, and 39 yards on the day.  He was 3 for 3 on extra points too.  That made Doerer a perfect 57  fr 57 on extra points this year.  Yoon, the all-time leading scorer in Notre Dame history that Doerer replaced, wasn’t even perfect on PAT’s last year – he was 41 of 43.

The only bummer with Doerer right now is that because Doerer was used for kickoffs in seven games in 2017, he only has one year of eligibility left.  Notre Dame will head into 2020, though, with an absolute weapon at placekicker.  No one saw this coming, and it’s fan-freaking-tastic.

Jeremiah Owusu-Koramoah flying all over the field

One of the most intriguing players heading into the year was ROVER Jeremiah Owusu-Koramoah.  His athleticism was evident every time he stepped on the field, but he had injury issues the last two years and was really raw out of high school, so it was reasonable to wonder if he’d struggle with consistency this year.  Well, he did at times, but on Saturday, he was ridiculous. JOK collected 4 tackles for loss, including 3 sacks, and he forced a fumble that he recovered himself on Iowa State’s second drive of the game that set the tone for what was to come from the Irish defense.

Linebacker play as whole turned out to be so much better than anyone expected this year, and the Irish return JOK and MIKE Drew White in 2020.  It’ll be interesting to see if Owusu-Koramoah stays at ROVER or moves over to BUCK like the last two Irish ROVERS.  Personally, I hope he stays at ROVER because he is absolutely perfect for it, and yesterday showed why.

He still has some instances where his inexperience shows – such as the one Brock Purdy scramble where he left his receiver early that could have been a touchdown pass if Purdy kept his eyes downfield, but those are all things he’ll work on with Clark Lea this off-season. This year he was the most intriguing player heading into the season, next year he might be the most exciting – at least on defense.

Raise your hand if you saw Notre Dame’s season-ending with the Irish winning their 11th game of the season in a bowl game in which Jonathan Doerer hit four of four field goals, and Tony Jones Jr ran for an 84-yard touchdown.  You, yeah you, put your hand down because you are a liar.  Jones has been known as a plodding running back capable of moving the chains for the Irish, but he’s never been seen as a burner who can bust off long touchdown runs.  Yesterday, though, Jones took a handoff from Ian Book on Notre Dame’s first offensive play of the second half, followed his blocks perfectly into the clear, and then used a grown-man stiff-arm inside the 10-yard line to complete the longest rush of the season for the Irish.

Jones had an interesting year.  He had four 100 yard games in the first six games of the year, but got banged up against Michigan and never looked the same until yesterday.  Yesterday’s 135 yards on 11 carry effort pushed him to 857 yards with a 6.0 yard per carry average.  That is a pretty good output – much better than anyone expected from him this year.

No one is doing cartwheels that Notre Dame’s season ended with a Camping World Bowl victory over a 7-5, now 7-6, Iowa State team; but at the same time, winning 11 or more games in back to back seasons for the first time in 20 years is still a big deal.  Part of this statistic is inflated because of the addition of a 12th game in the ’90s, but it’s still something that no coach at Notre Dame was able to guide the Irish to during the era of a 12-game regular season for Notre Dame.

While this wasn’t the progress everyone wanted, it is still progress none the less.  We all wanted progress this year to mean a playoff victory.  That went out the window when the Irish didn’t show up in Ann Arbor in October.  Winning 11 games, however, is incremental progress for a program that has struggled with consistency.  Remember, a year after Notre Dame went 12-1 in 2012, the Irish followed that up with a 9-4 campaign in 2013 that ended with a Pinstripe Bowl victory over Rutgers.

Notre Dame has now won 10 or more games three straight seasons and in four of the last five with the 2016 disaster mixed in.  Brian Kelly has brought Notre Dame back to being a fringe top 10 team every single season.  Again, that’s progress from where the program was.

We can now spend the entire off-season debating whether or not Kelly can take the next step into being an elite, top 10 team every season, but it’s not debatable that progress has been made the last three years.  With an influx of elite talent coming to campus soon in the class of 2020, a ton of talent coming back on defense, and arguably one of the best defensive coordinators in all of college football in Clark Lea; all the ingredients are there for the Irish to take that next step. 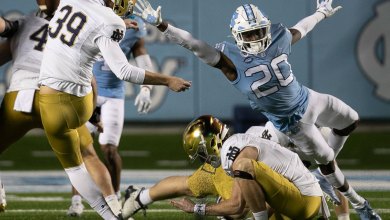 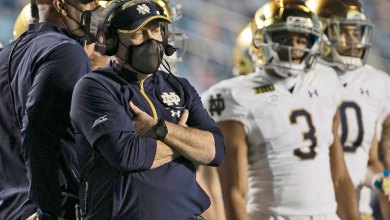