A simple game from the past for some, but monumental for me.

On November 21st, 1992, the Flammang family headed to the Los Angeles Memorial Coliseum to watch their first Notre Dame game in person. I was 12, and the sole reason this trip was happening. There is no good reason for my Fighting Irish fandom; I was born and grew up in Los Angeles, my dad was a huge John Wooden and UCLA basketball fan, my mom actually attended USC, but didn’t follow sports. I don’t even remember how it all started. My first memory is Rocket being denied his punt return touchdown in the 1991 Orange Bowl and crying in my room. So obviously, the seed was already planted. I can’t remember a time I didn’t love Notre Dame football.

So there we were in the stands, I was so nervous I was shaking, and the heroes in the gold helmets went out and did the thing and sent us all home happy. I grew up in an era where nothing that happened in the game was particularly weird or notable, but in hindsight is eye-opening.

Rick Mirer, the #2 pick in the next years NFL draft, went 5-14 for 75 yards and one interception. He was credited with five carries for negative three yards. Notre Dame basically got nothing out of the quarterback position and controlled the game on offense. Even Brandon Wimbush, who didn’t pass the ball particularly well in the 49-14 drubbing of USC in 2017, ran for 106 yards and two scores. If he wasn’t a thrower, he was a runner. Mirer was neither, but it didn’t matter. The early nineties, man. It was a time.

The More Things Change, The More They Stay The Same

Reggie Brooks And The Pass Rush Save The Day

As described above, Rick Mirer was essentially a non-factor, and USC was game in 1992. They were led by eventual NFL starting quarterback Rob Johnson, NFL stars at receiver in Curtis Conway and Johnnie Morton, and Travis Hannah as the third receiver who was no slouch himself, a fourth-round pick in 1993. They were threats through the air, much like the USC teams are today. Fortunately, the Notre Dame pass rush was also game, registering six sacks on the day, with Devon McDonald and Karmeleeah McGill having huge games. Hmmm, running and the pass rush, where have we heard this before?

But, most people who, when they think of this game, think of it as the Reggie Brooks flu game. All Brooks did was rush 19 times for 227 yards and three touchdowns with an upset stomach that was no secret following the contest. Brooks was a devastating combination of speed and power, running inside and outside, through people, around people, and away from people. He did it on draws, sweeps, and inside runs. Even when USC eight and even nine in the box (as they did on Brooks’ 44-yard touchdown run in the third quarter), it didn’t matter. Brooks and the running game weren’t going to be contained, as Jerome Bettis complimented Brooks with 18 carries for 89 yards and a fourth-quarter touchdown that pushed the lead to eight. Given that all this happened without the threat of run from the quarterback, nor a credible passing game, it is all the more remarkable.

I’ve been to a dozen Notre Dame football games in my lifetime, this was the first, and I remember it vividly. I distinctly remember Lou getting into a huff about something on the sideline and going at the refs. The crowd got all excited to see him doing his thing, and I was kind of in awe that we were even breathing the same air. When I wrote before about the heroes in the gold helmets, I meant that. USC was the local school, the son of one of my elementary school teachers actually played in this game. USC was a place I could drive to. South Bend to me, was a myth, a faraway place, like the North Pole or something. Seeing them for the first time, getting a victory, and having that day with my family as a nervous little kid in the stands will always be special. It especially hits home today now that sports are on hiatus, and we are unsure about when they are coming back. So thank you to Reggie Brooks and the guys in the gold helmets who made a lifelong memory to a 12-year-old kid and his family. 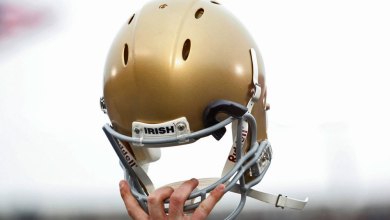