Khalid Kareem was the second Notre Dame player to hear his name called on the final day of the 2020 NFL Draft when the Cincinnati Bengals selected the Irish DE #147 overall with the first pick of the 5th round.

Kareem is the only defensive end that the Bengals have selected so far in the Draft.

Kareem was a dominant player for Notre Dame in spurts but struggled with consistency.  In 2018, he flat out destroyed Michigan, but then fell off a bit.  In 2019, Kareem racked up 2.0 sacks against Virginia, which accounted for a third of his total in 2019.  He did, however, play the final third of the season injured, requiring off-season surgery.

He is the second Notre Dame defensive end from the 2019 roster to be selected in this year’s Draft.  Julian Okwara was chosen in the third round of the Draft by the Detroit Lions with the 67th overall pick, where he will be reunited with his brother Romeo Okwara.

Kareem playing through injury should have helped his stock some with NFL teams since he put his team ahead of himself to finish the year.  He also played in the bowl game, despite injury while some players sit out bowl games these days.  At the same time, Kareem’s injury and the loss of Pro Days prevented Kareem from being able to perform at the Combine.

Injuries were a recurring trend in Kareem’s Notre Dame career, though.  While he didn’t miss a lot of games, he was on the turf regularly with minor injuries that would take him in and out of games.  That is likely one of the red flags NFL teams had on file for Kareem.  Once he gets to the NFL though and can focus the six days of the week on recovery exclusively, those minor, nagging injuries could be a thing of the past.

Kareem doesn’t enter the NFL with the same kind of upside as his former linemate Julian Okwara, but he brings a much higher floor.  It would not surprise anyone if Kareem ended up having a long NFL career as a quality starter. He finished his Notre Dame career with 109 total tackles, 13 sacks, 4 forced fumbles, and 2 fumble recoveries.  He capped his Notre Dame career with a touchdown in the regular-season finale at Stanford.

He isn’t flashy and doesn’t have the same freakish athleticism, but once he gets to the NFL and he can focus his attention 100% on recovery, the minor injuries that plagued him throughout his Notre Dame career should be a thing of the past.

Earlier today, Troy Pride Jr was selected in the fourth round of the Draft by the Carolina Panthers.  On Friday night, three Notre Dame players were selected – Cole Kmet by the Chicago Bears, Chase Claypool by the Pittsburgh Steelers, and Okwara by the Detroit Lions.  Okwara was reunited with his brother Romeo with the Lions, and the moment he realized it was caught on camera in one of the best moments of the 2020 NFL Draft. 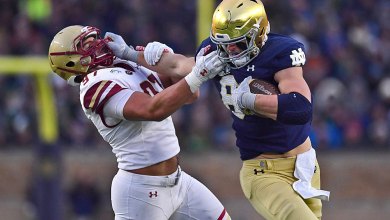 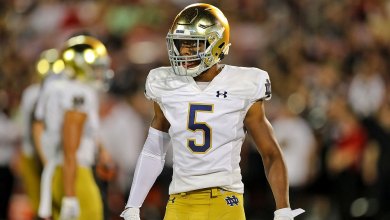