For all of the consternation over Brian Kelly’s preference for a passing game, Notre Dame has actually had a few years under his tenure where the Irish were a bonafide running team.  Think 2011, 2012, and 2015.  With an experienced offensive line that looks like it could be one of the nation’s best, the Irish have the kind of backfield needed to be a running team again this year.  In fact, Notre Dame’s backfield is straight up loaded this year.

Brian Kelly seems to know it too.  On Wednesday he said, “When they all run the ball they each have a different style and you could be very pleased with all three of them running the football.”  Before going into the strengths of each of his running backs.  What should get fans who tweet continuously on Saturday afternoons to RUN THE BALL (raises hand as guilty as charged sometimes) though is the following quote.  “They’ll all get a chance because we’re going to need three backs.  You can’t really get by a season with two. ”

You don’t need three backs if you aren’t going to be running the football a lot.  I know some will say in the comments that they will believe it when they see it, but we have seen it in those years above.  When Kelly has had an experienced offensive line, an inexperienced quarterback, and a stable of backs, he’s run the football.

In 2011, Kelly rode the duo of Jonas Gray and Cierre Wood with Tommy Rees as a sophomore.  Wood eclipsed 1,000 yards and Gray was on pace to before suffering a major injury on senior day.  In 2012, Kelly didn’t put much on Everett Golson as a redshirt freshman with Wood and Theo Riddick in the backfield.  Just two years ago, CJ Prosise topped 1,000 yards as a converted wide receiver and Josh Adams broke the Notre Dame freshman rushing mark after Deshone Kizer was thrust into the lineup following Malik Zaire’s injury.

So yes, he has done it before.  With Adams, Jones, and Williams running behind a line that has two potential first round picks next April and taking handoffs from a quarterback who hasn’t started a game in his career or even taken a hit in a game in almost two years, we should expect the same this fall.   Especially when you take into account the arrival of new offensive coordinator Chip Long.

So let’s take a look at Notre Dame’s ridiculous backfield.

Football fans always love the unknown who creates buzz in spring practice and fall camp.  Tony Jones Jr certainly fits the bill.  The hype has been building for the sophomore who didn’t play as a frosh last year since the spring.  Practice report after practice report has raved about the IMG Academy product and many have described him as the most complete back on the roster.

Brian Kelly didn’t do anything to temper expectations on Wednesday.  “Tony Jones is an extraordinary player when it comes to catching the football.  That’s a real strength of his,” said Kelly.

Considering Adams and Williams combined for 25 receptions last year, a more reliable receiving threat out of the backfield would be a welcomed addition.  Especially with an inexperienced quarterback.  By all accounts Jones will play quite a bit this fall.  His talents as a receiver and as a short yardage back at 5’11”, 225 lbs seem like the most logical role.

There might not be a more dynamic player on the Notre Dame roster – at least on offense – as Dexter Williams. The junior back has shown that when given the chance, he makes plays.  He looked headed for a breakout season in 2016 before falling off in the second half of the season.  His Tecmo Bowl style run at Syracuse, however, is a play that I can’t help but keep going back to.  Notre Dame has had very few running backs who can even make that play.

The question will be, what role does Williams play given Jones all around game and the presence of Adams atop the depth chart.  That is the question that was asked of Brian Kelly today that got him to go down the rabbit hole of the strengths of all of his backs.

“He”s a very good runner of the football,” Kelly said of Williams.  “Dexter has got that first step in the hole that none of them have.”

That sums up Williams pretty well.  He’s got the ability to make people miss in the backfield and turn losses or small gains into highlight reel runs.  A player like that has to have a role.  He is simply too dynamic not to get the ball in his hands.

Perhaps this year we finally see Williams get involved in the passing game too?  The idea of a RPO (run pass option) for Brandon Wimbush where he dumps the ball off to Williams in a little space is a very exciting thought for Notre Dame fans and a very scary thought for opposing defenses this fall.

Still The One: Josh Adams

While Jones is an all around talent and Williams is a dynamic playmaker.  Josh Adams is still the best running back on the Notre Dame roster and will enter the season as the starting running back for the Fighting Irish.  It seems like there might be a bit of underappreciation going on with Adams this off-season since he didn’t explode last year  like many thought he would.

Adams, however, was not his full self early on in 2016.  Once he started to get himself right, though, he was the same stud running back we saw at the end of the 2015 season.  He was at his best in the season finale against a pretty good USC team when he ran for 180 yards on 17 carries.  Even if you take out the 74 yard run he had, he still went over 100 yards against USC on 16 carries.   That’s impressive.

“Josh is a slasher than when he gets into the second level is very difficult to defend,” Kelly said Wednesday. Adams has proven that numerous times over the last two years.  Against Miami last year, Adams’s 41 yard 4th quarter touchdown run tied the game after Notre Dame squandered a 20 point lead.  Against Virginia Tech, his 67 yard touchdown gave the Irish a 10 point lead before they went on to give up 13 unanswered and lose the contest to secure a losing record. And lest we all forget Adams’s 98 yard jaunt against Mike Elko’s Wake Forest defense in 2015.

The good news is Adams is reportedly fully healthy and looking like his old self.  That is huge news for Notre Dame because Adams has the potential to turn the slightest bit of daylight into a big gain.  With Mike McGlinchey, Quenton Nelson, and company paving the way, there ought to be a lot of daylight.

Kelly and Long have a great problem on their hands here.  They have three great running backs who you can win football games with.  Their biggest problem will likely be finding enough touches to go around.  Given the Irish are expected to play fast and run a lot of plays though, there will be touches to go around.

Adams is the clear starter heading into the season so he’ll see a lot of action early in games.  If he gets going like he’s been known to, Kelly and Long could simply ride the hot hand.  If he’s slow at the start they could turn to Jones next.  With his compact 225 lbs frame, he could soften up a defense.  Then you hit them with Williams once the defense gets a little gassed.  Good luck to any defense trying to tackle Williams in the open field while Notre Dame is running 70+ plays a game.

While the backfield is loaded, each does come with some weaknesses that the staff is aware of and working.  Kelly didn’t go into them but Adams for instance isn’t the best short yardage back because of his height and upright running style.  Williams hasn’t been known to move piles either.  Jones, however, could fill that role.  At the same time, neither Jones or Williams can get into the second level of the defense as fast as Adams.

Between these three backs, Notre Dame’s got itself one hell of a backfield.  And we haven’t even talked about early enrollee CJ Holmes who has his own very bright future ahead of him. 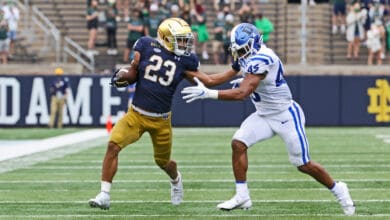