Notre Dame wide receiver Braden Lenzy is not listed on the office depth chart for Friday afternoon’s contest with North Carolina, but don’t count him out from suiting up for the Irish this weekend after missing the last three games.

“I wouldn’t take too much from this two-deep. Katy makes me turn it in, or you guys (the media) will be screaming, so you can pencil him in there somewhere in between,” Kelly told the media yesterday of his speedy junior receiver.

How Lenzy responds will determine whether or not he can play in some capacity this weekend. “We’ll see how he works through that, but he’ll do that today (Monday). (If) he gets the green light, I’ll pencil him in and get you guys a new two-deep.”

This is obviously a positive development for Lenzy, whose junior season has been derailed with this nagging injury, but before anyone gets too excited, expect Notre Dame to be overly cautious in how they reintegrate him back into the offense when he is cleared. Kelly has been known to use the first week back for players more as a stress test to see how their injuries respond. Before Kevin Austin ultimately reinjured his foot earlier this year, he played only a handful of reps in his first game back.

Lenzy injured his hamstring initially over the summer, which caused a slow start to his season. He missed the opener and then was lightly used over the next few games before reinjuring the hamstring in late action during the blowout of Pitt.

Getting him back for the stretch run would be huge for a wide receiving corps that has reinvented itself in the absence of Lenzy and Austin.

Notre Dame even got Lawrence Keys more involved in the offense two weeks ago against Boston College. If they can add Lenzy back into the mix, it would perhaps give the offense its missing piece – pure speed. That is assuming Lenzy can reach top speed this year following all the time he’s missed and whether or not he can trust that balky hamstring.

However, what’s important about a potential Lenzy return is that Notre Dame has proven it’s capable of beating elite teams without the speed dimension Lenzy provides. The Irish put up 47 points (33 in regulation) against Clemson. Notre Dame has scored 45 or more points now in three of their last four. Add a healthy Braden Lenzy to that offense, and you have the potential to be even more dangerous. 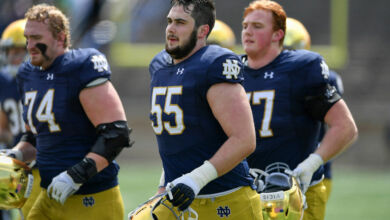