Notre Dame is back in action this afternoon for their final regular-season game of the year. The Irish are heavy favorites over an overmatched Syracuse squad that are upset-minded, even if they are entirely ill-equipped to give the Irish much of a fight. With a spot in the ACC Championship already locked up, the Irish have one final tune-up opportunity this afternoon with a few things they still need to work on.

Will Braden Lenzy get some work today?

Last week Braden Lenzy returned to action in a minimal capacity. Could we see some more work for the speedy wide receiver whose 2020 season has been largely lost due to a hamstring injury? Notre Dame’s offense has proven they don’t need Lenzy to excel, but getting him incorporated would make the Irish attack even more dangerous.

Hamstring injuries – especially ones that get reinjured – are tricky, so Notre Dame needs to be very careful with him. The last time they tried pushing it with him, he reinjured the hamstring in mop-up duty against Pitt.

If Lenzy is still very limited today, look for Lawrence Keys to get another shot or two at the pop-pass and jet sweep type plays that Lenzy excelled at last year. In an ideal world, one of them hits on one today, so Clemson has to respect it even more in the ACC Championship, allowing Tommy Rees to add some new wrinkle into the offense off of one of those plays. Think a double reverse or maybe a fake to Lenzy/Keys on a pop-pass handed off to Kyren Williams on a counter.

With the emergence of Javon McKinley, adding a speedy receiver into the mix that can take some more attention away from him so he can continue winning one-on-one matchups would also big.

Notre Dame had the best offensive line in the country through its first eight games. Then they lost two starters – center Jarrett Patterson and guard Tommy Kraemer – for last weekend’s trip to Chapel Hill. They will be without both again this weekend, even though Brian Kelly said Kraemer probably could play if it were an emergency.

With that, Notre Dame will have another new offensive line grouping today. Zeke Correll is slated to start at center again, but he, too, is now dealing with a minor ankle injury. If he is unable to go, Josh Lugg will start at center after starting at right guard last week. Kelly said earlier this week that Dillan Gibbons will start at guard this week regardless of Correll’s status. That, to me, says the staff isn’t totally confident that Correll will be able to give it a go.

Notre Dame will get Kraemer back for the ACCCG, but having another offensive line grouping out there today isn’t quite ideal. Hope that Notre Dame gets through this one without any more injuries up front.

Today is a Senior Day like none others before it, given the circumstances every game has been played under. There will be no fans outside of faculty, staff, and family with students home for semester break already.

On the one hand, it’s a shame that these seniors won’t be able to play in front of the students or fans one more time, given what this group has accomplished over the last four years. The run they are on is nothing short of remarkable, given where this program was when they all enrolled at Notre Dame.

On the other hand, in a way, it’s kind of unique that they will get to share their final home games with just their family and staff and no one else. I’m sure most aren’t looking at it that way, but given the circumstances, spending your final game with just your family that got you here and the staff/faculty that’s guided you through your career is unique.

Notre Dame is a huge favorite today, but don’t be surprised if the Irish don’t cover, even though Syracuse is really, really bad. Covering 34 points is a tall task any week, but with this being the final regular-season game and much bigger prizes for the Irish on the horizon, don’t be surprised to see players like Ian Book, Liam Eichenberg, Robert Hainsey, Daelin Hayes, etc. get an early hook.

I’d love nothing more than for Ian Book to have one final monster effort in Notre Dame Stadium since his numbers are a bit down this year, but does it make sense for him to be in the game in the second half if the Irish are up big? Not likely. He still could throw for four touchdowns by half-time, and it wouldn’t be surprising, but it would make sense for Kelly and staff to get all their starters out as early as possible today.

Is this Clark Lea’s last game in Notre Dame Stadium (for now)?

With what Clark Lea has done with the Notre Dame defense, it’s only a matter of time until he gets a head coaching gig – whether that’s at his alma mater Vanderbilt or not. Fans can hope and pray for Notre Dame to back up a Brinks truck with cash to keep him in South Bend, but that’s just not realistic. He’s a bright young coach that has head coach written all over him.

It’s very possible that today is the last game we get to see Lea coach as Notre Dame’s defensive coordinator in Notre Dame Stadium.

I said for now in the subheadline here because even if Lea does leave this off-season or one in the future, he is a coach whose career we all should continue to follow. Kelly will not coach forever, and Lea going somewhere as a head coach for a few years could make him a viable candidate to replace Kelly when he eventually retires.

I expect Notre Dame to come out and dominate the first-half today before getting the backups some work. For as bad as Syracuse’s record is, they do have some offensive firepower, so I wouldn’t be stunned if they put together a drive or two early that got them points before the defense settled in.

Offensively, I expect the Irish to be able to do whatever they want today, so it’s dealer’s choice for Tommy Rees. It’s an excellent opportunity to let Chris Tyree & C’be Flemister handle the load at running back to save some tread on Kyren Williams’s tires. It’s also one last chance to let Ian Book sling it in Notre Dame Stadium.

The current point spread is 34 points in favor of the Irish, and I see them coming up just short of covering. 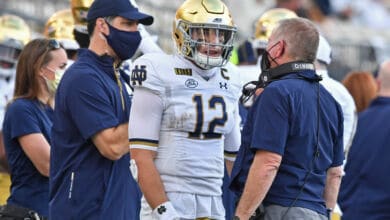 Frankie V’s Prediction: Will Notre Dame Football Learn from Its Past?