The most uncertain and unusual recruiting cycle of our lifetimes is about to come (mostly) to a close. In a world and setting mostly dominated by official on campus visits, and numerous trips to the homes of high school football players by multi-million dollar coaches, there was none of that. At least not since March when everything that was normal about college football went away. No on campus visits with recruits. No in home visits. Only Zooms and phone calls.

As expected, Notre Dame, a school that’s whole brand is it’s campus, struggled early when kids couldn’t visit the campus. But, they adjusted, found their footing and their message and things started falling into place. So how well did they do? Well let’s break it all down.

Where Will They Finish?

Likely somewhere in the 8-10 range nationally. This is a pretty big class, currently sitting at 24 players, which could grow in the coming days, but not in a significant way as to change their ranking. As I said, it’s hard to go back and really get a feel for how the mood was in May/June around recruiting, but it was pretty bleak. The Notre Dame staff really kept at it and put together a very good class.

The overall position numbers will be:

Four star quarterback Tyler Buchner, who committed way back in March of 2019, was at one point a five star prospect and ranked in the top 30 of the 247 composite. Then he had an underwhelming elite 11 camp (literally, this was the sole reason) and he dropped all the way down to……65th overall. Obviously, this is no big deal, and with high school football being scrapped in California this fall, Buchner left analysts with a bad camp to soak on. Never mind that though, he’s got everything a school would want: big arm, athletic, gorgeous deep ball, great runner, and accurate. If he’d played football this fall, there’d be talk of him winning the QB job in the spring (he’s enrolling early), but the conventional wisdom is the lack of a senior season of development will blunt that. Either way, there are the highest of hopes for this classes signal caller.

In all, there are four players in the top 100, Buchner included along with offensive linemen Blake Fisher and Rocco Spindler, plus receiver Deion Colzie. Wide receiver Lorenzo Styles finished just outside the top 100 at #115 overall and tight end commit Cane Berrong currently sits at 225. Six in the top 250, one a quarterback, two wide receivers and two offensive linemen. A very nice haul for the offensive staff.

More Numbers In The Secondary

It’s been difficult for the Irish to land high end talent on the back end of the defense, so they have countered that by giving themselves a bunch of bites at the apple. Last cycle, the Irish took a few three star talents in the secondary and appear to have hit the jackpot with Clarence Lewis, who it looks like will start for Notre Dame in the ACC championship game.

This cycle is more of the same, though there is reason to believe this class is a lot more talented than it does on paper. Four star Philip Riley has a low overall rank, #313 overall, but was highly coveted by the top programs and played against major competition in high school. Ryan Barnes is a mid three star who was quickly rising up the rankings till COVID ended his season and any chance to compete at camps. He was a top target of the Irish from the get-go. Three star Chance Tucker is one of the fastest players in California and he earned a quick offer from cornerback coach Mike Mickens upon his official hiring. They rounded out the corner class with local product JoJo Johnson, who could also play on offense.

Three star safety Justin Walters is forgotten about because a.) he committed last February and b.) he didn’t get a senior season. Tim Prister at Irish Illustrated is very high on what he can be and his playing style screams, “gain 20 pounds and move to Rover”, but he is athletic enough to stay where he is.

They Got Prince Kollie (Probably)

I added the caveat because Kollie was a little shaken by his position coach becoming the head coach somewhere else, so there is a smidge of doubt, but it looks to be ok. Which is good because this player is tremendous and Notre Dame badly needed him. He’s the prototype Rover at the moment. Can run, can cover, can hit, has the size, he’s got everything. He has flown up the rankings this fall, he sits at #91 per 247’s house rankings, he played running back and in the slot (at 6-1, 210) where he amassed 1,951 rushing yards and 31 touchdowns on 250 carries, 105 receptions for 1,683 yards, and 16 touchdowns over his career. His defensive numbers were just as impressive and of everyone in this class, his future may be the brightest.

Where Did They Miss?

Top Targets At Running Back

Before I get into the misses, Notre Dame could end up with Logan Diggs (he is committed, but received a late offer from LSU and is now pondering his decision) and Audric Estime (a four star commit to Michigan State, who Notre Dame recently offered and many think the Irish are favored to land). If these are the two backs who end up in the class, Notre Dame did very well for themselves as the two backs compliment each other very well and had excellent senior seasons. Even just one would be nice haul.

That said, Notre Dame really had a chance to get a top 50 talent in their backfield and to miss on both Will Shipley and Donovan Edwards leaves a “what if” feeling. Landing either of those two would lift the class into elite in terms of the offense and are the types of players Notre Dame really would like to start landing. Both fit the profile of the Notre Dame football player, they just had a great season from a running stand point (though Shipley was committed before that happened) and Lance Taylor came with the reputation of being the type of recruiter who would win these types of battles for Notre Dame. Unfortunately, it didn’t happen. 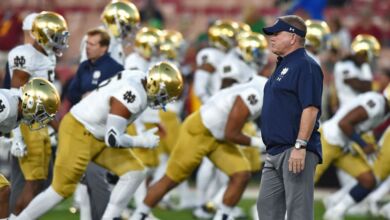