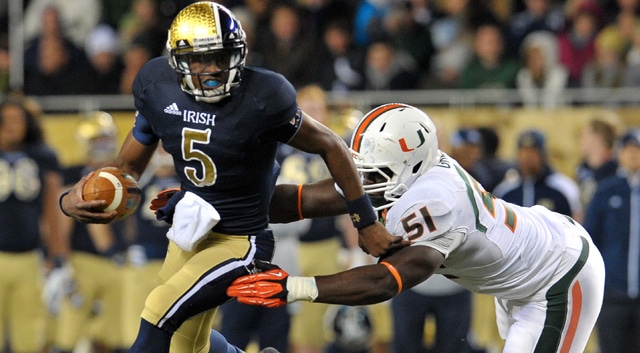 There was a whole lot to like in Notre Dame’s complete and thorough beating of Miami on Saturday night, but here are five things that stood out to me in a night of strong performances for the Irish.

As Brian Kelly mentioned on Saturday night, Everett Golson did a bit of growing up on Saturday night and it was evident throughout the game and on the stat sheet.  Golson had his best outing of the season completing 17 of 22 passes for 186 yards with no turnovers while adding another 51 yards on the ground.

What I liked the most about Golson’s performance, however, was the 2-minute drill he executed at the end of the first half even if it ended in a missed field goal.  Notre Dame got the ball at their own 30 yard line with just over a minute remaining and after a run by Cierre Wood that netted just 3 yards and ended with a fumble that Zack Martin recovered, Golson took over and completed 4 straight passes for 48 yards to set up a 34 yard field goal for Kyle Brindza.  Unfortunately for Notre Dame Brindza missed what is a chip shot for him, but more importantly for the Irish, Golson marched the Irish down the field with very little time.  It was a glimpse of what Golson is capable of and should have had Notre Dame fans very happy and optimistic.

A little lost in the shuffle of Notre Dame’s 38 point victory is the fact that Notre Dame was up just 10 points at half-time.  The second half, however, was an entirely different story with Notre Dame asserting its will on Miami and running the ball essentially at will on the Hurricanes over the final 30 minutes of the game.

Notre Dame scored touchdowns on all four of its drives in the second half with drives consisting of 6 plays for 81 yards, 12 plays for 86 yards, 3 plays for 66 yards, and 13 plays for 93 yards.  The best part of all of those drives is that of all 34 plays, only two of them were passes meaning Notre Dame simply lined up in the second half and dared the Miami defense to stop them.  They couldn’t and Notre Dame ende dup wracking up 376 yards on the ground.

Oh yeah, and defensively the Irish kept Miami off the scoreboard the entire second half extending their touchdown-less streak to 12 quarters.  Not too bad.  Not too bad at all.

Notre Dame has a legit home run hitter in the backfield with George Atkinson III and never was that on any better display than in the second half against Miami this past weekend.  Atkinson topped the 100 yard mark for the first time in his career with 123 yards on just 10 carries thanks in large part to his 55 yard touchdown run in the third quarter that was possible because of his blazing speed.  Atkinson got the ball followed the hole the offensive line opened for him and turned on the jets to score untouched – a run that only a running back with elite speed could have made look so easy.

Atkinson might have some work to do before he is ready to take over as the featured back next year (assuming Cierre Wood does not return for a 5th season) as he transitions from chance of pace back to featured back, but for now, Atkinson is giving the Irish offense a bonafide home run threat every time he touches the ball.

While Atkinson is thriving in the role of change of pace back, Cierre Wood showed again why he is the best all around back on the Irish roster and proved why he needs to be getting more carries.  After receiving just 17 carries in his first two games back after his suspension, Wood carried the ball 18 times on Saturday and responded with his first 100 yard outing of the season.

Of all of the Notre Dame backs, Wood is the most consistent in all aspects of the game and needs to be carrying the ball a minimum of 15-20 times a game for this offense to have more performances like it did this past weekend.

Not much more needs to be said about Notre Dame’s defensive performance that hasn’t already been said since Saturday, but after a slightly shaky start, the Irish defense dominated once again this week.  It would have been interesting to see what would have happened if Phillip Dorsett held on to either one of the perfectly thrown sure touchdown passes Stephen Morris hit him with on Miami’s first drive, but after that the defensive settled down, kept everything in front of them, and made Miami work for every yard.

Notre Dame is second in the country in scoring defense and has yet to allow a rushing touchdown all season.  Notre Dame hasn’t even trailed in a game yet this season thanks to the dominating performance of the Irish defense throughout the season.  After Saturday, the Irish defense has also now gone three full games without surrendering a touchdown – not to shabby considering that those three opponents were Michigan, Michigan State, and Miami.