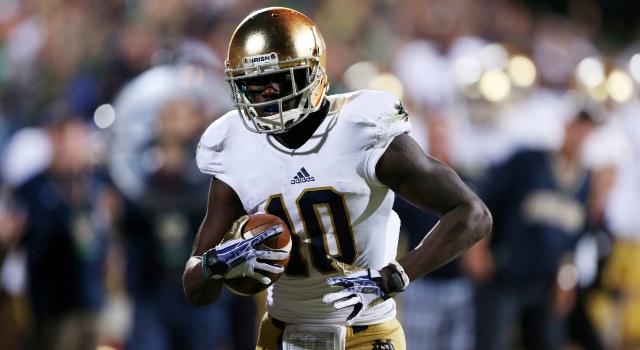 Still playing some catch-up after a busy weekend, but despite another underwhelming performance from Notre Dame, there was still plenty to like from the Irish on Saturday night.

The story of the night for Notre Dame was the best game of DaVaris Daniels’ career.  Daniels hauled in 8 passes for 167 yards and two touchdowns including an 82 yard bomb form Tommy Rees where he fought off a defender and raced down the sidelines.  The pass itself traveled just over 50 yards from Rees with Daniels supplying the remaining.

The play before Daniels highlight reel bomb was a nine yard touchdown to tie the game at 17.  After not catching a single touchdown last year, Daniels now has four this year through three games and is averaging just under 100 yards a game.  Daniels is showing all of the signs of being the dominant, #1, go-to wide receiver that everyone hoped he would become when he originally committed to Notre Dame.

The tough running of Cam McDaniel

Notre Dame is still in search of a go-to back and after Saturday, the surprise front runner right now could be Cam McDaniel after he provided some stability to the Notre Dame ground game in the 4th quarter.  McDaniel’s stats weren’t eye popping, but he ran tough and hard s the Irish worked the final 7 minutes off the clock.

McDaniel ended up totting the rock 16 times for 52 yards and a touchdown – Notre Dame’s only touchdown on the ground against Purdue and just its second on the season.  No one has been able to grab hold of the top spot on the Notre Dame depth chart at running back this year.  George Atkinson has had a case of the dropsies in the passing game, Amir Carlisle averaged less than 2 yards per carry against Purdue and then fumbled at a crucial juncture, and the freshmen tandem of Tarean Folston and Greg Bryant hasn’t gotten enough carries to show what they can do.  At this point though, McDaniel at least has earned some additional carries this weekend.

The Notre Dame defense has not been fun to watch this year.  After being one of the best units in the entire country last year, the Irish defense has had trouble slowing down the offenses of both Temple and Purdue already this year. Despite the poor start, however, two players have started to step up and improve each week – Jarrett Grace and Jaylon Smith.

The play of the inside linebackers has been alarming at times in this early season, but Jarrett Grace has played better each week and was all over the field on Saturday night.  Grace had 10 tackles against the Boilermakers and is now second on the team in tackles with 20 on the season.  Grace is earning himself a permanent spot in the starting lineup and has looked the best in coverage among the ILB by far.

On the edge, freshman Jaylon Smith continues to show why he was so highly rated.  Smith only was credited with one tackle, but it went for a loss and his athleticism has led to other players making plays because of his pursuit.  Smith is starting to put it all together and should only continue to improve each week.

Tommy Rees might not be a captain, but he was the one on the sideline leading a huddle of the offense with almost every member of the unit present and attentive.  Notre Dame needs some leaders to emerge as they are missing the leadership that Manti Te’o and Kapron Lewis Moore brought to the table last year.

Seeing the team rally behind Rees on the sideline was great to see as this team has shown glimpses of the talent it has what they are capable – a 14 point outburst in less than 5 minutes against Temple and a 21 point outburst in less than 3:30 minutes against Purdue – but consistency has dogged this team so far this year.  Rees is playing well on the field and if he can step up and assume more of a leadership role on offense, hopefully slow starts like last week won’t be a trend.

Despite a sluggish start on offense, Notre Dame ended up having a great day on third down converting 11 out of 16 third down attempts.   A week ago Notre Dame just over 50 % (8 of 15) of its third downs against Michigan and in week one the Irish were even worse converting just 5 of 13 third downs.

For the Notre Dame offense to continue to improve third downs will be key for this unit as they will need to string together long drives.  While they have shown the ability to make the big play, this isn’t an offense that will continually make that home run play.  If Notre Dame can convert third downs at a high rate again this weekend the Irish should find themselves victorious again this weekend.