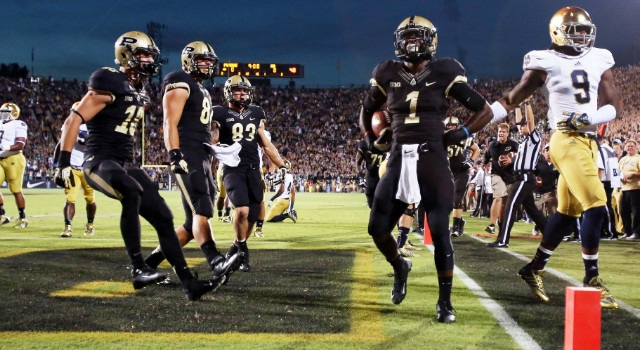 Notre Dame improved to 2-1 on the season this past weekend in an unnecessarily hard fought win over a hapless Purdue team that was a 20 point underdog.  While there were some positives in the Irish victory, there are still plenty of areas of concerns as the Irish hit the quarter point in the 2013 season.

Despite losing to Michigan two weeks ago, the Notre Dame offense moved the ball throughout the game on the Wolverines before settling for field goals, turning the ball over, etc.  Against Purdue though, the Notre Dame offense was down right anemic in the first half.  Against a defense that allowed 42 points to Cincinnati a few weeks ago, Notre Dame managed just three points in the first half and converted just 4 of 9 third down attempts.

Notre Dame’s first three drives on Saturday night all ended in punts.  Their fourth drive ended on downs after they managed to gain just 29 yards on 10 plays.  Notre Dame finally got on the scoreboard with their fifth drive of the game, but had to settle for a field goal after marching 80 yards down the field on 11 plays.

By the time the Irish went into the locker room at half time, they ran just 33 plays and had all of the three points on the scoreboard.  That kind of production is not going to result in a whole lot of victories this year with the way the defense is playing.  Last year Notre Dame could get away with performances like that a little bit easier, but this year it’s not going to cut it.

Speaking of the defense, Notre Dame gave up 24 points to an offense that managed just 7 points in their season opener against Cincinnati and just 30 points against FCS Indiana State in week two.  Against Notre Dame, Purdue took the opening kick-off and then marched 75 yards down the field on 12 plays to jump out to a 7-0 lead.

After Notre Dame tied the game at 10 at the start of the third quarter, the defense allowed Purdue to immediately take the lead by allowing a 8 play, 54 yard touchdown drive.  Purdue was also 3 of 4 in the redzone with those three scores all being touchdowns and the lone failed attempt being a missed chip shot field.

Last year Notre Dame thrived in the red-zone, this year the Irish are allowing teams to score at an alarming rate.  Opposing offenses have had 11 trips to the red-zone with 8 of those trips ending in touchdowns and the other three ending in missed field goals.    That is a touchdown rate of 73%.  Compare that just a 45% touchdown rate for the Notre Dame offense and it’s not hard to see why the Irish are sitting at 2-1.

Lacking of running game until the final 7 minutes

Notre Dame ran the ball 37 times on Saturday – a much stronger commitment to the run than we’ve seen all season.  Unfortunately, the Irish gained just 91 yards on those 37 attempts for an average of 2.5 yards per carry.  Take away the 42 yards Cam McDaniel picked up on 10 carries on Notre Dame’s final drive and the Irish gained 49 yards on their first 27 attempts.

Last year Notre Dame was able to run the ball against every defense they faced outside of Alabama’s.  This year the Irish haven’t been able to get the same production out of the ground game.  Notre Dame averaged 189.4 yards a game running the ball.  Through three games this year that average is down to 125 a game.  That needs to change for Notre Dame to even think about another BCS bowl run.

Connor Reilly made his first career start against Notre Dame in the season opener.  Against the Irish he threw for 228 yards and ran for 65 without turning the ball over.  The next week against Houston to threw for 200, ran for -7 and threw two interceptions.

Heading into this past weekend, Rob Henry had not thrown a single touchdown pass against Cincinnati and Indiana State.  Against Notre Dame, Henry torched the Notre Dame secondary for three touchdowns and 256 yards.

Notre Dame cannot keep making opposing quarterbacks look like All Americans and turn in their best performance of the season if they have any thoughts on playing in a meaningful bowl game this season.

After it looked like Notre Dame had Purdue on the ropes and was ready to deliver the knockout blow following Bennett Jackson’s pick 6 that ended a span of 3:29 where the Irish scored 21 points, the defense allowed Purdue to get right back into the game by allowing a 7 play 75 yard touchdown drive.  On the drive, Purdue gained a first down on 3rd down thanks to a pass interference penalty on Keivarae Russell and then gave up the touchdown on 4th and goal.

Notre Dame had a chance to get a three and out and get off the field, but instead the Boilers got the first down due to penalty and marched down the field.   That simply would not have happened last year.