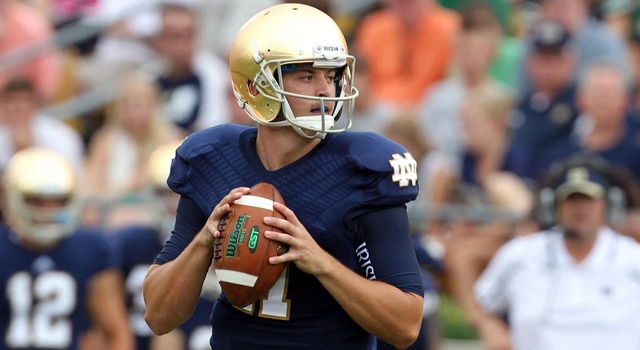 There was plenty to be concerned about coming out of Notre Dame’s relatively easy 28-6 win to start the season yesterday, but at the same time, there was a lot to like and a lot to be excited about as well.

Just as we did last year, we will be doing posts on the 5 things we liked and 5 things we didn’t like for each game on the schedule. We’ll kick things off this week focusing primarily on the offensive side of the ball for the things we liked.

1. The debut of Amir Carlisle

All summer long I’ve been talking about how excited I was to see what Amir Carlisle would add to the Notre Dame offense.  It didn’t take him long to show us either.  After a procedure penalty before Notre Dame even snapped the ball for the first time in 2013, Carlisle took a handoff from Tommy Rees out of the pistol formation and raced 45 yards downfield displaying excellent top end speed.

Carlisle is a dynamic runner and it seems clear that Brian Kelly and Chuck Martin are going to try to find ways to get him the ball.  Carlisle was targeted a couple times on bubble screens but Temple did a good job sniffing them out on both occasions.  He ended the game with 68 yards on 7 rushes to lead the Irish in yardage and caught two passes for 5 yards.

Look for Carlisle’s role to continue to grow each week.

2. The play of all of Notre Dame’s wide receivers

All summer long we’ve talked about the depth Notre Dame has at wide receiver this year and that depth was on full display Saturday.  DaVaris Daniels wasted no time finding the endzone after not scoring at all in 2012.  Daniels pulled in two 32 yard passes from Rees for touchdowns in the first quarter before having to leave the game with a minor groin injury.

Despite not scoring a touchdown, TJ Jones was the star of the group with 6 catches for 138 yards including a 51 yarder where he displayed a burst we haven’t seen from him before.  It looks like Jones found another gear this off-season and that he is going to be the focal point of the Notre Dame aerial attack this season.

Chris Brown got into the action as well with a big third down conversion and 3 catches overall for 57 yards.  Brown caught just two passes for 56 yards as a true freshman last year meaning he has surpassed both totals already.   Notre Dame has a lot of options in the passing game this year and they were all on display yesterday for everyone, including Michigan to see.

While all of the depth at wide receiver was great to see, it was even better seeing Tommy Rees get the ball downfield accurately and timely.  His throws to Daniels were both right on the money and looked good coming out his arm – no wounded ducks and air balls lobbed downfield.

No one is going to mistake Rees’s arm with Brett Favre’s, but the senior quarterback was highly efficient on Saturday with a career high 335 yards to go along with three touchdowns and most importantly, NO turnovers.  Turnovers have haunted Rees in the past but he did not turn the ball over once on Saturday.  Rees only had three starts in all of 2011  where he didn’t turn the ball over once.

If Rees can continue to get the ball downfield and protect it like he did Saturday, the Notre Dame offense will be in more than solid shape this season.

Troy Niklas’s 66 yards touchdown at the end of the first half was a lot of fun to watch and was very reminiscent of John Carlson’s long touchdown against Michigan State in 2006 and Kyle Rudolph’s 95 yarder against Michigan in 2010.  Niklas got behind the defense and saw two Temple defenders bounce off of him like flies on a windshield.  It was his only catch of the day, but when your only catch goes for 66 yards and a touchdown, you are making your presence felt.

More impressive than seeing a 270 lb tight end race down the field for 66 yards, however, was the blocking Niklas displayed on the perimeter of the Notre Dame offense.  Niklas got out in space and manhandled some Temple defenders on the short passes that Notre Dame receivers were able to turn into long gains. In the past NIklas has been great blocking right at the point of attack, but hadn’t shown such a strong ability to block in space before.

If anyone is still overly concerned about losing running back commitment Elijah Hood, watch Saturday’s game over again and you will feel better because Notre Dame has a stable of running backs all capable of being starters for big time programs on the college level.  We’ve already discussed Carlisle but outside of him Cam McDaniel looked great and so did the rookie tandem of Greg Bryant and Tarean Folston.

The only negative with the running backs was that starter George Atkinson still isn’t running with a low pad level and took at least one big shot from a Temple defender because of it.  Overall, Atkinson was probably the least impressive of the backs too despite being the only one to reach the endzone.  Atkinson wasn’t bad, he just wasn’t as impressive as some of the other Notre Dame backs.

Something tells me that Notre Dame threw the ball a lot to get Michigan’s attention and that we are going to see more of an effort to run the ball next week.  Kelly and Martin got five different running backs involved this week and it wouldn’t surprise me if ether Bryant or Folston emerged next week ala Daris Walker against Michigan in 2004.