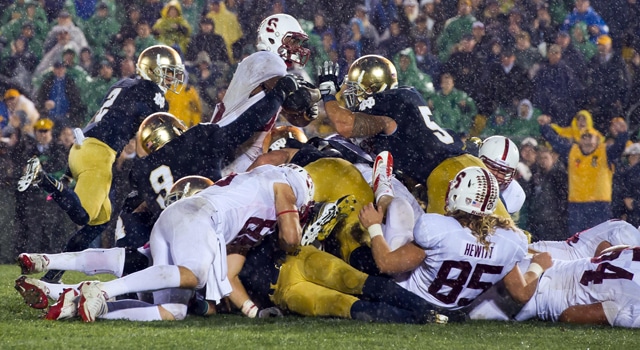 Another week.  Another win.  Another list of a lot of things I liked seeing from our Fighting Irish.  There were a lot of hiccups along the way on Saturday, but at the end of the day, Notre Dame beat another top 25 team – a team that had beaten them the last three years – to stay undefeated.

In no particular order, here’s this week’s 5 Things I Liked.

Stanford fans will disagree about this one, but I don’t care.  The goal line stand by the Irish defense was a thing of beauty – especially the 3rd down attempt when there was no doubt whatsoever about whether or not Stepfan Taylor got into the endzone because Manti Te’o made the play of his career with a huge hit to push the Stanford back short of the goal line.

I’ve seen the replay many, many times now, I still say that there wasn’t enough video evidence in either direction to be able to reverse the call.  I don’t care of Mike Pereira says (side note: stick to the NFL game Periera).  What I do know is that in years past, we wouldn’t have been having this discussion because Stanford’s offensive line would have gotten more than enough push to tie the game well before the failed 4th down attempt.

I have been trying like hell not to get too carried away with this team because for as great as this run has been, I think there are still some glaring holes on this team, but I do think there is a good chance that in a few years when we look back at where the Brian Kelly Era is at Notre Dame, we’ll point to Saturday’s goal line stand as a turning point.

I should probably just say the entire secondary because Zeke Motta played the game of his career on Saturday, but the young defensive backs especially have turned out to be much better than we thought.  They are benefiting from the play of a great defensive line in front of them, but even with that added boost, Bennett Jackson, Kei’Varae Russell, and Matthias Farley are playing very good football for players with resumes as short on experience as their’s were to start the season.

Jackson now has three interceptions on the season, Russell has improved dramatically in the tackling department since the beginning of the season, and Farley has all of the looks of a big play free safety.  Farley in particular has me excited for the future because the kid is so athletic that if he can put it all together, he could be a great safety in this defense.

The resilience of Tommy Rees

I have been a little tough on Tommy Rees in the past – and really, what Notre Dame blogger hasn’t been? But, I am more than happy to give the kid credit for having the resilience of a champion.  Saturday was the third time he’s been asked to come off the bench to save the day for the Irish and for the third time, he has come through in the clutch.

Rees was 4 for 4 for 43 yards and a touchdown – the eventual game winner – while capping off the game tying drive at the end of regulation and Notre Dame’s lone overtime possession.  Rees is headed back to the bench again with Golson likely to be cleared by Tuesday by the Notre Dame medical staff just as he has the last two times he’s come off the bench to rally the Irish offense – a situation he’s handled with class and maturity.

I still think Golson is the future at quarterback for the Irish, but in the interim, if Tommy Rees can keep filling in when needed as Golson gets through his growing pains and Notre Dame keeps winning games, I don’t think anyone will complain much.

Another game without allowing an offensive touchdown

Think back to the 2008 and 2009 seasons when the Irish defense squandered leads and had trouble stopping even average defenses and tell me you honestly thought that four years later we would be watching a defense that kept Michigan, Michigan State, Miami, and Stanford out of the endzone for 16 straight quarters.  If you said yes, you, my friend, are a liar.

Notre Dame’s defense is earning all of the hype and publicity it is getting this season by playing tough, hard nosed football.  This defense has been able to get pressure on opposing quarterbacks without needing to run (obvious) blitzes 90% of the time as they did a few years back with much, much less success.  That pressure has allowed the Notre Dame linebackers to keep opposing tight ends in check and the young secondary to learn on the job without experiencing a baptism by fire.

$15 all you can drink specials during the game

The game itself was a roller coaster ride that for me was made a little more bumpy thanks to a $15 all you can drink special I stumbled across for the game.  That special though, made the post game celebration just a tad more fun.

If I can find similar specials in future weekends and the Irish keep winning, I’ll be a very, very happy blogger… that is if my heart can handle that kind of drama.

In all seriousness though, there was a lot to like in this game even with a sluggish offensive performance.  Most of all, the fact that the Irish are 6-0 and ranked #5 in the first BCS standings with a great chance to reach double digits in wins for the first time since 2006 and just the third time since ’93.