6 Veterans Notre Dame Needs to Step Up in ’14 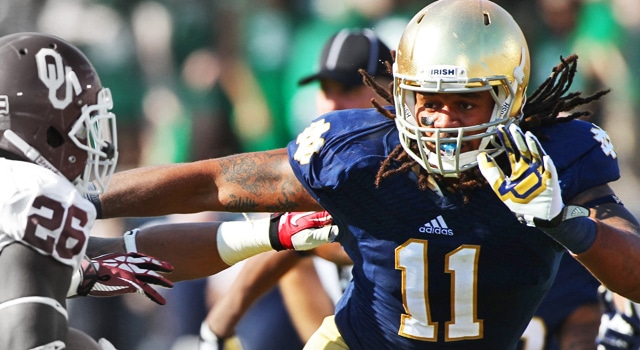 Notre Dame didn’t satisfy its goal of returning to the national championship in 2013 due to slipping back into poor habits from 2011. If the Irish want to get back on track in 2014 they’ll need have numerous veterans step up as all of the team’s senior leadership core are headed to the NFL. The following is a list of veterans who finally need to step up and live up to their potential or make the next step to becoming stars and leaders for the Irish.

Also be sure to check out our list of 6 underclassmen Notre Dame needs to step up in 2014 from last week too.

Outside linebacker Ishaq Williams came into Notre Dame as one of the top players in their 2011 recruiting class but has yet to live up to that potential. Williams was expected to be a dangerous edge rusher but has only recorded 45 tackles in his three year career. The New York native must step up with primary pass rushers Stephon Tuitt and Prince Shembo moving onto the NFL or the Irish will struggle to get after the passer next season.

Receiver DaVaris Daniels has all the physical tools but questions remain about his off-field attitude after his suspension from Notre Dame for the current semester. Daniels was second to T.J. Jones in every major receiving category last season with 49 receptions for 745 yards and seven touchdowns. With Jones gone and Troy Niklas leaving the Irish return only six touchdown receptions from players other than Daniels in 2013, so the red-shirt junior will need to become the go-to guy for Notre Dame in the pass game.

Another receiver that will need to step up for the Irish is Chris Brown. Brown was the team’s fourth leading receiver in 2013 with 15 receptions for 209 yards and a touchdown. The South Carolina native has homerun speed and will be the Irish’s best deep threat, which will be more of a factor with Everett Golson back. With the majority of the Irish receivers being very inexperienced Brown will be counted on to be on his game from the very start of the season.

Last season Notre Dame tight end Ben Koyack began to show the tools that made him a very sought after recruit coming out of high school. Koyack improved as a blocker and finally contributed as a receiver, catching 1o passes for 171 yards and three touchdowns while playing behind Troy Niklas. With Niklas leaving Notre Dame early it’s up to Koyack to continue the legacy of great tight ends at Notre Dame.

Irish defensive end Sheldon Day struggled with injuries last season which limited his effectiveness, something Notre Dame can’t afford this upcoming season. Day will be the only returning starter on the defensive line with Stephon Tuitt and Louis Nix III turning pro. With the two superstars of the Irish defense gone it will be up to Day to lead a young defensive line and contribute to the pass rush as well as being stout against the run with depth being a concern in the team’s front seven.

With inside linebacker depth also being a concern for the Irish Kendall Moore is expected to return for a fifth year. Fifth-year seniors Carlo Calabrese and Dan Fox are gone and Jarrett Grace returning from a significant leg injury Moore will be relied upon to actively contribute on defense. Moore has been mostly a special teams player in his time at Notre Dame but had a career high 17 tackles and an interception last season.