8 Could Breakout for Notre Dame in ’12 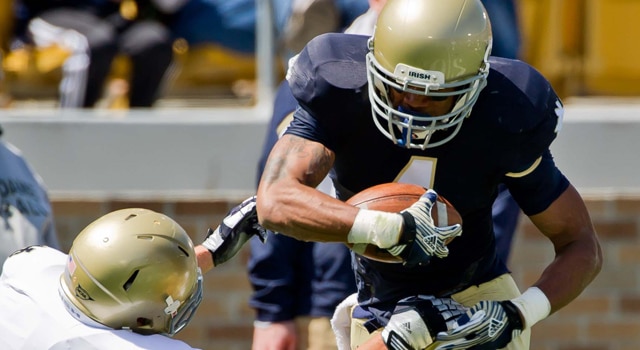 George Atkinson is one of several Notre Dame players who could breakout this fall. (Photo - Matt Cashore / USPRESSWIRE)

Often times the difference between a good year and a great year for a team is the number of players who come out of nowhere and become star players. Every team has its star players coming into a season and they know what to expect from them.

For Notre Dame, we know Tyler Eifert is going to a beast for opposing defenses to handle and that Manti Te’o is going to wreak some havoc on opposing offenses.

We know that Zack Martin is going to anchor the left side of the Irish offensive line and Braxston Cave will man the middle. We know that Kapron Lewis-Moore is going to be more than just a solid, well-rounded defensive end and that Jamoris Slaughter is going to lead a very green Irish secondary.

What will make the difference between Notre Dame playing a bowl game while the calendar still reads 2012 as opposed to 2013, however, are the players who will step up and become major contributors who hadn’t done so in the past – players who see opportunities for playing time this fall and simply seize them and never let go.

Last year Notre Dame saw Cierre Wood and Jonas Gray both breakout and form the best 1-2 punch at running back for the Irish offense since the days of Lou Holtz. We also saw Tyler Eifert step out of the Kyle Rudolph’s shadow and become a household name in his own right.

Here’s a look at some players who we could be talking about at season’s end as breakout performers who helped shaped Brian Kelly’s 3rd season on the Notre Dame sideline.

Atkinson already broke out on special teams last year with two kick returns for touchdowns, but this season is when the sophomore should start to make his presence felt on the offensive side of the ball as well. Atkinson is simply too talented of an athlete to not have the ball in his hands when the Irish offense is on the field.  Cierre Wood’s recent suspension for the first two weeks of the season should allow for Atkinson to start to make his presence felt early on this season.

Once Wood returns from his two game ban, Atkinson won’t unseat him for the starting tailback spot and Theo Riddick will his fair share of carries in his new hybrid role, but at the end of the day, Atkinson is going to have plays called for him this fall.  So far, he hasn’t done anything to suggest that isn’t capable of making an impact when his number gets called.

Look for Kelly and offensive coordinator Chuck Martin to find some ways to get Atkinson the ball in space where he can use his ability to make defenders miss to take some short passes and pitches for long gains. If Cierre Wood wracks up another 1,000 yard season this fall, Notre Dame will face the real possibility of him leaving for the NFL even though he has a 5th year of eligibility left – something Kelly and Martin are certainly aware of. With that in mind they will be looking to groom Atkinson as Wood’s heir apparent.

Also keep an eye out for Atkinson catching the ball out of the backfield.  He was originally recruited as a wide receiver before moving to running back and could be a force as a receiver as well.  Needless to say, I expect big, big things out of Atkinson and expect to start to see them this fall.

This one is fairly obvious at this point, but after not playing as a true freshman and being named the starter for the 2012 season, Golson is the definition of a potential breakout player.  Golson has all of the talent in the world. He’s extremely athletic, lightning quick, and has a rocket arm. The biggest hurdle for him this season will be playing within himself and within the offense. Because of his superior athleticism, he was able to live off of that alone at the high school level and if he tries to make the kind of plays he made in high school, he will frustrate Notre Dame fans, not to mention Brian Kelly, to no end on occassion. At the same time, he will use that same athleticism to pull out some plays that will have fans scrambling for their DVR remotes to figure out what just happened.

Personally, I am trying to temper my expectations for Golson this year, but its been difficult to do so and I have to admit that there hasn’t been a Notre Dame quarterback I have been more excited to see break the Irish huddle in a while because of the x-factor that he brings to the table.

For Notre Dame to have the kind of season that gives fans hope that Brian Kelly is indeed the man to guide Notre Dame back to prominence Bennett Jackson is going to have to have a monster season. Notre Dame is dangerously thin at cornerback now that junior Lo Wood is out for the season with an Achilles injury and will be counting heavily on Jackson, a converted wide receiver with little game experience, to lock down one of the starting corner spots.

Jackson is an unquestioned starter on defense and early returns this fall camp are that he is performing very well in that role, but once the CBS cameras start rolling in a couple days from Dublin, things could change in a hurry when the action is live. The New Jersey native has always been a fantastic athlete and he hasn’t shown any indications that he isn’t up for being a very good corner in this defense, but injuries and recruiting shortcomings have Notre Dame banking a lot on Jackson being one of their breakout performers in 2012.

A year later, Councell is familiar with Bob Diaco’s defense and is penciled in as the starting DOG outside linebacker for the season. With the graduation of Darius Fleming, Prince Shembo has slid over to the CAT position where his pass rush skills should allow him to shine while Councell will likely step into Shembo’s role from a year ago assuming he holds of Danny Spond for the position.

Sticking at outside linebacker, Ishaq Williams came to Notre Dame with all of the hype as his fellow high school All American teammates Stephon Tuitt and Aaron Lynch, but was slower to make an impact last fall despite having a full spring practice under his belt before his freshman season. With a year of experience in Diaco’s system, however, the proverbial light swith appears to be on the verge of flipping on for him.

Williams will have a very tough time beating out Shembo for the starting position, but as a situational pass rusher, Williams could very well make his presence felt early and often in 2012. In watching the practice videos produced by the University, there is a clear difference in Williams’ play this summer and it looks like the former 5-star recruit is just about ready to start fulfilling his potential.

Switching over to the defensive side of the ball but sticking within the Atkinson family, cornerback Josh Atkinson has a chance to breakout out thanks in large part to Lo Wood’s injury.  Freshman Keivarae Russell has passed Atkinson on the depth chart at corner, but Atkinson will have a chance to be the nickel back and will push Russell throughout the season for the starting position opposite Bennett Jackson.  Given Russell’s lack of experience, there is no way of really determining if he’ll be able to leverage his strong fall camp into a successful season.  Should Russell slip up, look for Atkinson to step in.

Notre Dame is going to need a red zone threat other than Tyler Eifert because opposing defenses are going to do everything they can to make sure that big old #80 doesn’t beat them down there and the sophomore with an NFL pedigree is the most logical choice because of his size and leaping ability.

It looked like Daniels was going to see the field as a true freshman last year early on in camp, but it took the talented but raw receiver a little while to adjust to the college game after being able to rely almost exclusively on that aforementioned size and leaping ability during his high school days. A year later, Daniels could be ready to step out from behind the shadow of his father, former NFL defensive lineman Phillip Daniels, and start to make a name for himself.

If Daniels doesn’t seize the opportunity to be Notre Dame’s go to “big” receiver, local product Daniel Smith could very well come out of nowhere to do so. Smith’s career has been plagued by nagging injuries that have slowed his progress over the last three years, but so far in camp he has been healthy and could be ready to fulfill his potential this fall. If he’s not ready to do so, Smith’s Irish career could end with a lot of what if’s with a crop of young, talented receivers coming in this fall ready to challenge for playing time.