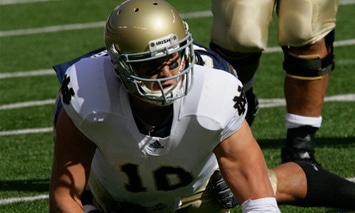 Dayne Crist has battle injury and inconsistency over his first three seasons in South Bend and is now facing a now or never season in 2011. (Photo - Richard A. Brightly/Icon SMI)

Heading into fall camp every year there are a number of players who face now or never type seasons.  Maybe they are coming off on an injury.  Maybe they just haven’t cracked the starting lineup yet.  Maybe they were recruited over and now have to fight off some hot shot freshman for playing time.

Whatever the reason, every year there are more than a few players in this boat.  As fall camp approaches we take a look at a few such players for the Irish in 2011 starting with the guy who spent last year’s season against Purdue as the starting quarterback – Dayne Crist.

Dayne Crist – At this time last year who would have thought we would be discussing Dayne Crist as a “now or never” player heading into the 2011 season? With three talented quarterbacks behind him on the depth chart and after rehabbing another major knee injury though, Crist very much faces a now or never type season in his fourth year in South Bend. Crist has his ups and downs in his first season as the starting quarterback last year.  At times he looked like he was in complete command of the Irish offense – see the second half of the Michigan game and the Michigan State game – but other times he looked like things were moving too fast and he just wasn’t comfortable – see the Navy game.

For the second year in a row, Crist surprised everyone by being healthy in time for spring practice, but in the Blue Gold game he still looked hesitant to push the ball down the field even though he has the arm to fire lasers if he wants to.  Crist and sophomore Tommy Rees are considered to have a pretty big lead over the other two quarterbacks vying for the starting role in 2011 (Andrew Hendrix and Everett Golson).  Some even feel Crist is the leader in the clubhouse heading into fall camp, and while the former five star recruit has plenty of work to do to look the position down, reports out of spring practice were largely positive.

I’ve said many times since the end of the season, if Notre Dame is going to make a serious run at a BCS bowl this year, Crist will need to play up to his potential.  He’s got all of the ability in the world.  He just needs to put it all together.  If he doesn’t he may be watching from the sidelines in shoulder pads instead of warmups as he did last year after his injury.

Jonas Gray – Notre Dame is very thin at the running back position in 2011 and Gray will have one final chance to turn all of the talent and potential we’ve seen over the last three years into a productive season.  Despite seeing the playing field as a true freshman, Gray enters his final year of eligibility with just 309 career rushing yards on 75 attempts without a single touchdown in his career.  Gray battled fumbling problems early in his career, but has improved in that department since.  A knee injury cost him five games in 2010 though and he carried the ball a career low 20 times .  Cierre Wood looks to be ready for a breakout season in 2011, but there will be carries there for Gray and he could potentially team with Wood to give Notre Dame a dynamic duo at the position.  For that to happen though, he’ll need to stay healthy and play up to the potential he has flashed over the last three years.

Deion Walker – When Walker and Michael Floyd were both recruited in the recruiting class of 2008, there was some debate as to who would be the better wide receiver as both were ranked similarly by most recruiting services.  Heading into their senior seasons, Floyd is considered an All American talent while Walker has one career catch for just 15 yards.  Walker drew some high praise from Brian Kelly at times during spring practice, but in the Blue Gold game he didn’t do much to stand out.  Notre Dame needs some receivers to step up in fall camp and there is a golden opportunity for the former four star recruit to stake his claim for playing time this season.  Youngsters like Daniel Smith and DaVaris Daniels could very well jump Walker and bury him on the depth chart, however if the proverbial light switch doesn’t turn on for him in a hurry.

John Goodman – Sticking at the wide receiver position, Walker’s classmate John Goodman faces a similar make or break season in 2011.  Goodman was given plenty of chances to establish himself in 2010, but the Indiana native showed inconsistent hands throughout the season.  His career production is higher than Walker’s, but he still has just 21 catches for 250 yards and a single touchdown in his first three seasons in South Bend.  Like Walker, Goodman will have a golden opportunity for playing time this fall if he establishes himself in fall camp and can show the coaching staff some consistency.

Mike Ragone – Rounding out the offensive portion of this article, we’ll slide over to tight end where Mike Ragone enters his fifth season in South Bend.  To say Ragone’s career has been tumultuous would be an understatement.  In 2008, Ragone tore his ACL and missed the entire season opening the door for some freshman named Kyle Rudolph.  Ragone returned in 2009, but didn’t look like the same pre-injury player.  Last year Ragone ran into some trouble with the law in the spring and then made a trip to hospital in fall camp for heat illness.  Tyler Eifert looks ready for a breakout season as the starting tight end this fall, but there is still a chance for Ragone to make an impact as the second tight end and end what was once a very promising looking career on a solid note.  Ragone will receive some competition from sophomore Alex Welch for that backup tight end position.  Welch drew praise from Kelly multiple times last year, but did not see the field as a true freshman.

Steve Filer – Filer might be the epitome of the “now or never” player in 2011.  Since pretty much his first day on campus there have been rave reviews of Filer’s athleticism.  He might be the most athletic player on the defensive side of the ball regardless of position, but for whatever reason, he hasn’t been able to translate that athleticism into on field production.  Heck, he hasn’t even been able to turn it into much on field participation.  Filer has all of the tools to be a very productive player in this defensive system at outside linebacker.  If his light switch turns on at some point this fall, he could easily turn from a “now or never” player to an “out of no where” player.  That could be a very big if though.

Jamoris Slaughter – Slaughter has two years of eligibility left including the 2011 season, but injuries allowed Zeke Motta to stake his claim to the starting strong safety position that Slaughter occupied to start of the 2011 season.  Motta began to establish himself as the starter throughout the season and ended spring practice with that position still in his possession.  Slaughter has shown plenty of promise over the last two seasons, but nagging injuries really slowed him down in 2010 and if he isn’t able to make his way back up the depth chart, he might have a hard time holding off the young talent Notre Dame is bringing in in the secondary with the incoming freshmen and current recruiting class.

Robert Blanton – Blanton made our list of player’s ready for their closeups in 2011 last week so it may seem odd that Blanton made the list of now or never players as well, but with no eligibility remaining, 2011 marks the last chance for the never short on confidence corner to elevate his game to the level many have felt he is capable of reaching.  Blanton started 12 games in his first two seasons in South Bend, but started just one of 13 games a year ago.  The talent and instincts are definitely there with the South Carolina native.  Even though he only started just one game last year, Blanton still had two interceptions – the third season in row he picked off a pair of passes.  He also posted a career best 7 tackles for loss in 2010 after having just 4 in his first two seasons combined.  He enters 2011 with a firm grasp, almost a stranglehold, on one of the starting corner positions and will have every opportunity to turn in a breakout season.

Tomorrow we’ll take a look back at last year’s “Now or Never” players and how they fared during the 2010 season.