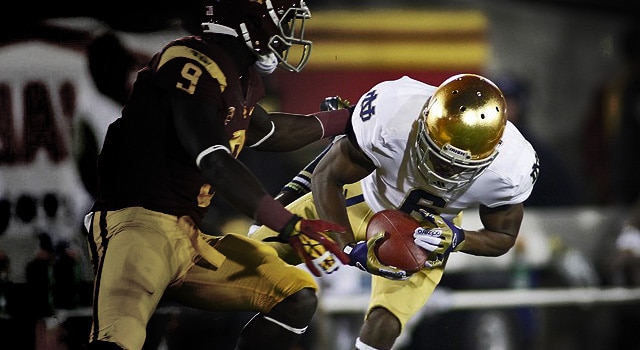 Keivarae Russell is one of four players linked to the current investigation into academic misconduct at Notre Dame. (Photo: Larry Placido/Icon SMI)

The Notre Dame community was rocked on Friday with the bombshell of an internal investigation into academic misconduct involving four members of the football team.  While not much is known at this time, we do know that the four players involved – Ishaq Williams, Keivarae Russell, Davaris Daniels, and Kendall Moore – are not practicing while the investigation is underway and their futures with the University are up in the air depending on the outcome of the investigation.

To be clear, none of the four players mentioned this point have been dismissed or had any disciplinary action levied against them other than being withheld from practice during the course of the investigation.  It’s possible that the investigation could lead to suspensions, dismissals, etc at some point but at this point we simply don’t know.

Since we also don’t know how long this investigation will drag out or when we may know the status of the four players involved, it’s probably safe to assume that Brian Kelly and his coaching staff have been spending a lot of time over the last 24-48 hours assessing their roster and what they will do should this investigation lead to disciplinary action.

Here’s a run down of how the Irish roster would look like should they be without each of the four players involved in the investigation.

The fallout from Notre Dame’s ongoing academic investigation looks like it could potentially have the biggest impact on the defensive end position.  Keivarae Russell is by far the best player to be associated with this scandal, but Notre Dame is better equipped to play without him better than they are Williams.   While the former 5-star DE hasn’t exactly lit the world on fire during his first three seasons, Notre Dame was already going to be forced to play a lot of freshmen up front following Tony Springmann’s injury.

True freshman Andrew Trumbetti was already listed as the starting weak-side defensive end and classmate Jonathan Bonner was in the two-deep as well at the three-technique.  If Notre Dame were to lose Williams, sophomore Isaac Rochell would probably be elevated into the starting lineup in Williams’s place.  Rochell has the size (listed at 287 lbs) to be able to hold up against the run on the strong-side.  It’s possible that Bonner could move over and provide some depth there as well.

While Trumbetti leap frogged Romeo Okwara at the weak-side, don’t look for Okwara to move over to the strong-side for Williams if necessary.  Okwara doesn’t have the size to hold up on the strong-side.  Notre Dame could be in worse position than having to start a sophomore who came in a year ago as a 4-star recruit but didn’t play as a true freshmen.  Given that the defensive and offensive lines are the two areas where you specifically don’t want to have to rely on freshmen, though, Notre Dame would have some serious challenges ahead of them if they lost Williams.

As mentioned earlier, Russell is the best player among the four linked to the investigation currently.  He had the potential to become an All-American this year and was considered a potential early NFL Draft candidate following his junior year.  All of that said, with the addition of 5th year transfer Cody Riggs on top of the talent Notre Dame already has at corner, the Irish can sustain a potential loss of Russell and still be OK at the position.

If Notre Dame were to be without Russell, Riggs and sophomore Cole Luke would be the starters with Matthias Farley and Devin Butler battling it out for the nickel position.  True freshman Nick Watkins has been impressive in camp already and was already slated to play.  His role would definitely expand should the Irish be without Russell for any extended period of time.

It actually speaks to the depth Notre Dame has built at the position that they could lose Russell, arguably the best corner they’ve had in years,  and still have a group as strong as Riggs, Luke, Butler, Farley, and Watkins ready to play.  Notre Dame also still has Josh Atkinson and Jalen Brown for depth at the position.

Also consider this.  In 2012 Notre Dame entered the season with a true freshman converted running back/wide receiver (Russell) and junior who had converted to corner from wide receiver just a year before (Bennett Jackson).  I don’t think anyone could argue that, at worst, Notre Dame would be in a similar, if not substantially better, position in 2014 if Riggs and Luke were the starters.

This is another position were Notre Dame thankfully has enough depth, albeit inexperienced, built up to potentially sustain the loss of Daniels should they have to.  Notre Dame already went through the entire spring without Daniels while he was suspended due to his GPA dropping too low – something separate from this current situation.

Chris Brown and Will Fuller have been running with the first team at wide receiver so far in camp because Daniels was banged up and Kelly was making the senior earn his starting spot back.  Sophomore Corey Robinson’s role will greatly expand as well.  Early enrollee Justin Brent has looked strong in camp so far as well and is the most physically advanced receiver on the roster now.   Brent’s classmate Corey Holmes had a chance to see the field this fall even with Daniels available.  If Daniels ends up not being available, Holmes will almost certainly see the field.

A starting duo of Fuller and Brown will be plenty fast for Notre Dame – potentially the fastest starting combo Notre Dame’s had in a long time.  The problem with these two as Notre Dame’s starters, aside from a lack of experience, is size.  Neither have great size or are known to be great blockers at this point in their careers.   For that reason, Robinson or even Brent could a chance to start given their size.

Notre Dame would be down to Fuller, Brown, Robinson, Brent, and Holmes as outside wide receivers and CJ Prosise, Amir Carlisle, and Torii Hunter at the slot this fall if they are without Daniels.  That is a group that still has a lot of potential but hasn’t had that much previous production.

The easiest player to potentially replace for Notre Dame is 5th year senior Kendall Moore.  I can’t remember Brian Kelly mentioning Moore once during any of his fall camp press conferences or post practice reports.  Even after a strong showing in the Pinstripe Bowl, Moore was expected to be more of a depth player and likely wasn’t going to be in the 2-deep to start the season anyway.  Joe Schmidt and Nyles Morgan figured to be one-two at the MIKE, Jaylon Smith and Greer Martini at the WILL, and James Onwualu and John Turner at the SAM position based on Kelly’s comments earlier this week.

The linebacker group is still a major concern for Notre Dame heading into the season, but a potential loss of Moore really doesn’t hurt that much given his position on the depth chart.  It would have been nice to have Moore for the special teams units, but even if Notre Dame loses Moore, they probably won’t feel the impact much on the field.

Losing all or any combination of these players for any period of time will make what was already a tough schedule even tougher for Notre Dame, but even if all four were lost for the entire season, there is enough talent on the current Notre Dame roster for the Irish to still have a meaningful and successful season.