Monday was a busy day on the transfer market for Notre Dame.  The Irish lost reserve center Tristen Hoge to BYU earlier in the day before adding graduate transfer wide receiver Cameron Smith from Arizona State later in the day.  The transfer news didn’t stop there though.  Navy safety Alohi Gilam who last week announced he was transferring, tweeted that he would be officially visiting Notre Dame.

Excited to check out Notre Dame on an official visit. Grateful for the opportunity #NextChapter @NDFootball pic.twitter.com/Ea9j72Ifms

According to Irish Illustrated, that visit will take place on Tuesday already.

Your head spinning yet?  If not it should be.  Monday was one of the busiest days of transfer related news I could ever remember in our time covering Notre Dame football at UHND.  We’ve been online since 1997.

Let’s dive into this one.

After a year at the Naval prep school in Rhode Island, Gilman started as a freshman in 2016 for the Midshipmen and was second on the team with 76 tackles.  Twelve of those – yes 12 – came in Navy’s upset of Notre Dame in Jacksonville in November.  Gilman’s strong freshman campaign earned him All America Athletic Conference Honorable Mention.

Here’s one of them were he upended Josh Adams downfield courtesy of Pete Sampson.

Navy safety and potential transfer Alohi Gilman. Josh Adams is sort of a big dude to make this happen. pic.twitter.com/qoz301Qq8N

A change in policy from the Navy is believed to have pushed Gilman to transfer when he did.  When Gilman enrolled at the Navy the ability to pursue a NFL career post Naval Academy was a possibility.  The Academy, however, changed their policy in April and reinstituted a two year commitment upon graduation before a player would be able to pursue a professional career.

Safety is one of Notre Dame’s weakest positions from a depth perspective both in 2017 and beyond so the need for help at safety is clearly there for Notre Dame.  The idea of adding a transfer from Navy, however, would still be a new one for Notre Dame.  It’s not exactly normal for Navy to produce an All AAC honorable mention true freshman who played three different positions in the secondary either though.

Notre Dame has Derrik Allen committed in the class of 2018, but even with a stud like Allen, Notre Dame needs to add more help at the position.  Adding Gilman would essentially be like adding another safety to the class of 2018.  The only difference would be Gilman would have only three year of eligibility remaining starting next season because of his one year at the Navy.

On top of Notre Dame, Utah and Michigan have been mentioned as possible landing spots.  Hawaii, Nevada, UNLV, Air Force, and Utah State all recruited Gilman out of high school as well.

Roster Math Is Getting Hard

Notre Dame is currently sitting at 85 scholarships after the departures of Josh Barajas and Tristen Hoge and the addition of Cameron Smith on Monday.  To add Gilman, Notre Dame would need to open up another roster spot to make room even though Gilman is not a graduate transfer who is eligible to play immediately.  Does the staff know it is going to lose another player or have another scholarship to work with for 2017?

Whatever the case, we know that Gilman will have to sit out the 2017 season and that Notre Dame needs to open up a roster spot to take Gilman should today’s visit go well.

On top of facing off against Notre Dame and racking up 12 tackles in the process, Gilman has another connection to Notre Dame.  Gilman hails from the same high school as former defensive tackle Kona Schwenke who I still wish we could have seen play as a 5th year had his redshirt not been foolishly burned in 2011.  But I digress. 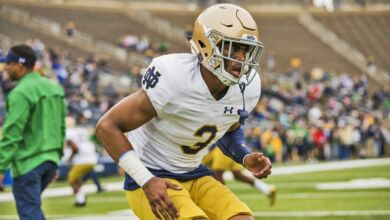 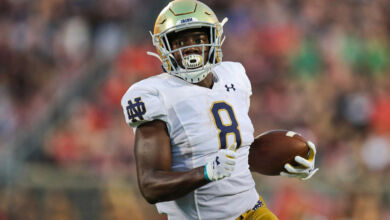