Amir Carlisle Out for Spring, Other Injury Updates 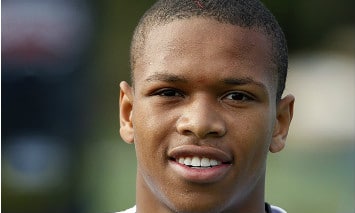 Last week we got the good news that Amir Carlisle was granted a waiver by the NCAA to be eligible this fall after his transfer from USC in January.  This week we got the bad news that Carlisle broke his ankle in a non contract, voluntary drill last week and will be sidelined for spring practice.

“Amir suffered a broken ankle in a non contact drill last week. Actually it was in our voluntary seven on seven, so he’ll be out for the spring,” Brian Kelly said on Tuesday.  He was quick to add though that the injury isn’t expected to cause long term problems for the talented and versatile back.  “But nothing structurally major to the point where we’re concerned about him. He’ll be ready to go for June when we come back for our summer conditioning program.”

The news of Carlisle receiving his waiver from the NCAA was a little surprising since typically hardship cases requesting waivers involve family medical issues, but the good news was short lived for Notre Dame after learning Carlisle would be out for spring practice.  It’s unfortunate for Notre Dame too because Carlisle has the talent to make an instant impact and was slowed by other, unrelated injuries as a freshman for USC this past fall.

The good news, however, is that there isn’t anything structurally wrong with the ankle and he is expected to be a full go for fall camp.  With the loss of Michael Floyd, Notre Dame is going to need all of the playmakers it can get.

With Carlisle out, look for Theo Riddick to make the most of the carries he gets at the running back position as he tries to establish a leg up on the likes of Carlisle and Davonte Neal at the combo running back/slot receiver position.

Kelly had some other other injury updates as well.

Overall, not a bad injury situation for the Irish.  Getting Nichols back is a big plus for the offensive line.  He will compete for the starting right tackle position that is up for grabs this spring and summer after the graduation of Taylor Dever.  Nichols has drawn some rave reviews from the coaching staff throughout his young career, but injuries have slowed him down.  If he can stay healthy this spring he’ll have a major say in that right tackle position.

For Roberson, Kelly’s update that he isn’t back to 100% really shows just how serious the injury he sustained last spring was.  Hopefully for his sake, he can come back and compete at the same level that earned him offensive scout team player of the year as a freshman in 2010.

As for the 5th year guys, it makes perfect sense to take it slow with them.  While Lewis-Moore and Cave both can certainly improve on their games, it’s best to side on the side of caution.  What’s unfortunate for Cave is he will miss out on some valuable practice time in new offensive line coach Harry Hiestand’s blocking schemes.