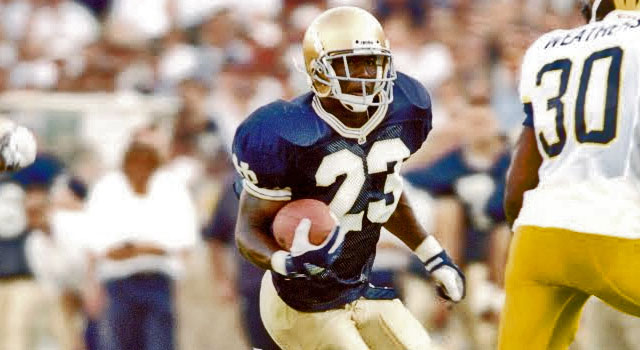 The nearly simultaneous hiring of two Notre Dame legends will have a powerful long term effect on all aspects of that dynamic organism we call “Notre Dame Football.”

Limited minds will, as is their wont, become ensnared in the thick of thin things, magnifying this secondary technique, that ball security issue, this recruiting triumph and that recruiting heartbreak.

But these two hires triggered a Big Bang and a new galaxy now shines in the Notre Dame Sky.

Historians will note that not since the days of Faust, when Mike Stock and George Kelly attempted to keep Faust afloat in ‘85, has Notre Dame had two alumni as assistant coaches. After 30 years, that drought is over.

Talk is cheap. Enough of words. Actions speak louder than.

“Blah, blah, Mr. and Mrs. Five Star parents, we develop the whole person here at Notre Dame….”. “Ya da, ya da, ya da, Mr. Stud Prospect, Notre Dame is not a four year decision but a forty year decision.”   Nice, and true. But then Lyght and Denson stride into the room as regal as lions. Elegant men and their deeds always trump mere rhetoric.

Todd Lyght didn’t need to “learn” the definition of an RKG. He sees one in the mirror every morning when he shaves.

Autry Denson doesn’t need to learn a canned sales pitch on the compatibility of faith, charity and football, having lived his “ministry of football” and his sponsored youth football program.

“There is more to coming to Notre Dame than playing football.” Lyght clearly proved this. All-American, ’88 National Champion, indeed. But he kept going with an NFL career and a Super Bowl Championship. Then he moved on to success as a restaurateur in tony Newport Beach, CA, an investment salesman and a football color analyst. His success led him to establish a scholarship foundation at Notre Dame which has helped 15 NON-FOOTBALL playing Domers pay for their education, including a Rhodes Scholar.

True Excellence “Gets it.” When Lyght had the hankering to return to football, he started, humbly-and wisely, as a defensive coach for the country’s preeminent high school football power, Bishop Gorman in Las Vegas. Then he became an intern for the wizard, Chip Kelly, at Oregon. Lyght is simply infatuated with excellence.   And now, at last “Mama called” and Todd Lyght has returned to Notre Dame.

Autry’s Denson path home was pure football. With the advice and consent of his high school sweetie, his now long time and sole wife he migrated from the NFL to the Canadian Football League to high school coaching in Florida to Bethune Cookman to Miami of Ohio with old friend Chuck Martin. And now he too is back at du lac.

But let’s look to the wider Notre Dame football community. Lyght and Denson are not the only football players involved deeply on the Notre Dame staff, football and beyond.

Reggie Brooks is in his 11th year as a Notre Dame employee. He is now the director of Student-Athlete Alumni Relationships and Engagement. David Grimes is a Strength and Conditioning Assistant. Maurice Crum has returned as a defensive intern. And Ron Powlus is the Director of Player Development. From Lyght’s first year in 1987 to Grimes’ and Crum’s graduation in 2009, this bridges nearly a quarter century of Notre Dame football players. “Us” and “We” is now richer, deeper, more vibrant with more texture, depth and family ties. All the players, past, present and future are now convinced beyond a shadow of reasonable doubt that, at Notre Dame, players are not just “hired guns” or, to use the Longhorn phrase, “Meat on the Hoof.” Notre Dame, if no one else, does walk its talk. And let’s not kid ourselves: ethnicity matters.

Chip Kelly, the guy who hired Todd Lyght to work as an intern, is popularly regarded as an offensive tactitian. That undersells Chip Kelly’s true genius. Kelly, as all great men, is sharper than those who try to glibly pigeonhole them. Kelly’s guiding principle is different. “Culture wins football games. Culture will beat scheme every day.” From his mouth to our ears. After surviving many dangers, toils and snares, Notre Dame’s Football culture is not merely intact, but more vibrant and bountiful than ever. There are 120 schools playing D-1 football in the FBS. 119 do it one way. But this is Notre Dame Football.

Thanks to Autry, to Todd and to Brian!