After jumping out to a commanding 27-0 halftime lead over the Navy Midshipmen, the Notre Dame Fighting Irish weren’t quite as smooth following intermission before coming away with a 44-22 victory. The win keeps the Irish undefeated at 8-0, which will help cement their spot among the top four teams when the first rankings for college football playoff spots comes out on Tuesday.

What had been a nearly flawless performance during the first half became a bit raggedy afterward, especially on the defensive side. That unit had allowed just 72 yards in the opening 30 minutes before giving up nearly four times as much real estate after the break.

Ordinarily, coughing up the ball in your own territory on the first play from scrimmage isn’t the type of tone any team’s looking to set. Yet once Notre Dame stopped Navy on downs on the ensuing series, it was the Irish that dominated until halftime. On four of the last five drives of the half, Notre Dame reached the end zone and actually ended up winning the time-of-possession battle for both the half and the entire game. With respect to time of possession, that was a major victory against the run-based Midshipmen.

Yet the Irish defense also did their part by allowing just 72 yards of offense and a pair of first downs. All but two of those yards came on runs, with Julian Okwara managing to also collect a sack. Once Notre Dame was able to get it to third down during the first two quarters, a Navy punt was on the horizon, with the Middies converting just one of seven opportunities on third and failing on their lone attempt on fourth down.

A 22-point win should largely be free of any major worries, but some cropped up during the second half. Book’s lone interception came on a pass that resembled his ill-advised pick against Virginia Tech three weeks ago and gives him four in his last three games after none in his first two starts. He remains a high-percentage thrower, but some growth down the stretch in this area would be nice. However, his running did allow him to finish with 50 yards on the night.

Part of the issue for Notre Dame in the Navy comeback attempt was the Irish tackling lapses that helped get the Midshipmen within 15 early in the fourth quarter. Those need to be tidied up in the weeks ahead, while the hope is that the high ankle sprain that removed Drue Tranquill from the game in the first quarter won’t keep him out too long.

The Notre Dame passing attack was expected to have a big night and did just that, with Ian Book throwing for 330 yards and a pair of touchdown passes to Miles Boykin. Yet the team’s running game also flourished by collecting 254 yards on the ground, with two players collecting some some healthy bits of yardage along the way in their first outing together in 2018.

Dexter Williams broke the century mark for the third time in the four games he’s played, garnering 142 yards averaging just over six yards per carry to go with his three scoring runs. For the most part, such numbers have been the norm since his return against Stanford, but one welcome sight was Jafar Armstrong’s 52 yards on nine carries, which included getting the Irish on the scoreboard. For good measure, Armstrong also grabbed five Ian Book tosses for 64 yards, matching Chase Claypool‘s grabs on the night.

The second half defense may have paled in comparison to what the Irish delivered in the opening two quarters, but this unit was still largely on point. Of the 272 yards allowed after the break, 150 came in Navy’s first two series after play resumed, which helps pinpoint where the chief breakdown developed.

Removing that amount from the final numbers means that the triple-option threat that Navy posed was held to less than four yards per play for most of the game. Finding a happy medium between the first half dominance and the defensive performance after those two drives is something that Brian Kelly and his staff hope to harness as the Irish close out the regular season.

While Notre Dame last faced the Northwestern just four years ago, it’s been 42 years since they traveled to the Wildcats’ campus in Evanston to play a game. After starting out the season with just one win in their first four games, Northwestern has come on strong with four consecutive wins, including an upset on Saturday of 20th-ranked Wisconsin.

The Irish could benefit if the Wildcats are unable to again rise to the occasion, yet now that they’re officially in the mix for the college football playoffs, they can’t afford to look past this game. Especially since they were on the losing end the last meeting in between these two squads, dropping a 43-40 overtime battle. 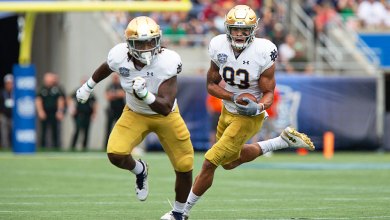 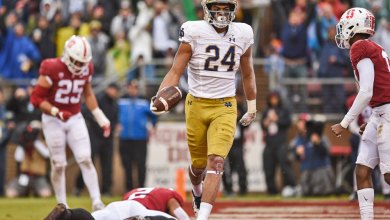 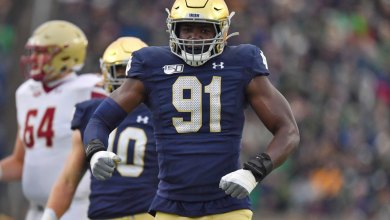 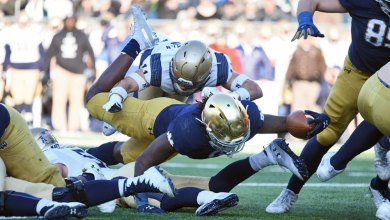