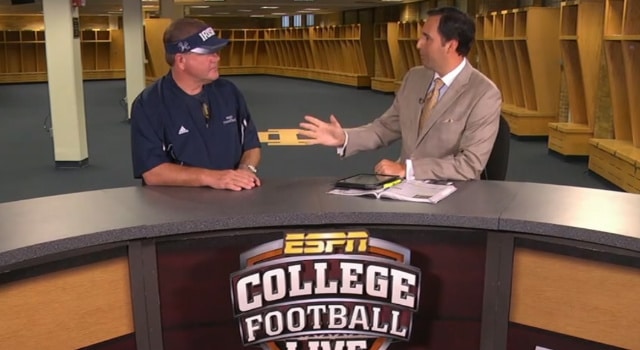 Last week Irish coach Brian Kelly set down with ESPN analyst Joe Tessitore and discussed the upcoming season, and the expectations that come with it. Kelly brought up some very interesting points, but the one consistent message was simply that he and his team are looking to build off the success of 2012, not live off it.

Even the most recluse Irish fan understands the tumultuous off-season the Irish have had, and Tessitore opened with just that question, asking Brian Kelly how good does it feel to getting back to just coaching football “After going through the year we did, to focus on your players and focus on day to day football is why we do this”. Pretty standard coach talk, but with the drama that the Irish and their coaching staff had to deal with since mid-February, there is more truth to this statement then even Brian Kelly would admit.

The interview took a familiar turn as Kelly was then asked about his personal need to shut up some of the critics, and prove the Irish were not a one-hit wonder. Kelly’s answer was once again truthful and insightful “For me, we look within more than we pay attention to others. For us it’s about consistency in our program, and so the next step for our program is if you win 12 games, now you have to show that you can consistently be amongst the elite teams” Kelly also stated  “As we build this program, the watchword for us is consistency” Irish fans have to be tired of having to prove something to the rest of the country, but when a program is such a polarizing entity, it tends to come with the territory.

The subject of what the reasoning behind opening fall practice at such a remote place(Shiloh Park –Marion, IN) was next on the docket, and Kelly’s answer gave more insight about his wanting to leave last year behind “It was an opportunity for it to be a primer for the focus that we wanted,  and the focus was not to think about last year, not to be thinking about what we did in the past, but to focus on right now” By now it is easy to pick up on the theme that Brian Kelly is trying to convey not only to the analyst, but to the fans across the country watching. While there may be a lot of starters returning from last year, this team needs find a way to forge its own indemnity.

The confidence level in Tommy Rees would be the next subject(as if Irish fans aren’t tired of that question already) and Brian would answer no differently than he had before “I’ve always been confident in Tommy in the understanding of our offense, it’s the execution and not turning the ball over. The one thing that has been Tommy’s Achilles Heel is the turnover. As long as he takes care of the football, we are going to move the ball at a high level” Kelly has been consistent with this answer throughout the his coaching of the young man from California, and his expectations are no different this year. Tommy Rees can be a very good college quarterback if he truly has figured out how to take care of the ball.

As the interview wrapped up, the last question Kelly was asked was about the wave of incoming talent, and to mention some names that Irish fans should be excited about, and the names he mentioned should sound familiar by now “I think George Atkinson is going to be a guy, and we have some very good freshmen that are coming. Greg Bryant is a young man who is going to get an opportunity, along with Tarean Folston. On the defensive side of the ball you have Jaylon Smith and Cole Luke” If you have followed Irish recruiting at all, or even are just a fan of the Notre Dame program, than you know these names by now and the expectations that are resting on them.

The overall feeling throughout the interview was a positive one, but one that leaves one feeling that Brian Kelly feels like he still has a lot more to prove while head coach at the University of Notre Dame. Kelly finished off the interview by stating a sentiment that most Irish fans are hoping comes to fruition “I’m doing what I want to do, which is coaching football at Notre Dame – Now let’s go win some games”