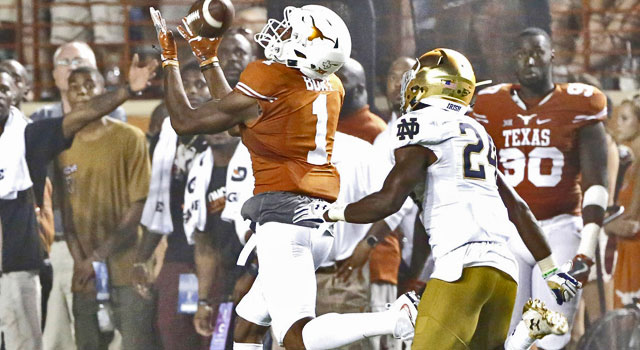 The third year of the Brian VanGorder experience was supposed to be different.  Three years in the players – albeit with several new starters – were supposed to fully grasp VanGorder’s attacking schemes.  In the season opener, however, VanGorder’s defense was the one being attacked by a true freshman quarterback running a newly implemented offensive system to the tune of 50 points.

It was the same old story for a Brian VanGorder Notre Dame defense.

All summer long the talk was Notre Dame’s defense would be able to limit the big plays and improve on defense despite losing Sheldon Day, Jaylon Smith, Keivarae Russell, Joe Schmidt, Romeo Okwara, and Matthias Farley.  Instead a true freshman quarterback led the way for Texas’s 50 point, 500+ yard eruption in the first game of a brand new uptempo offense.

Think about that for a second.  A true freshman quarterback was able to torch the Notre Dame secondary in the first game of a brand new offense while the Irish were playing in their first game of the THIRD year of the Brian VanGorder defense.

The fears expressed all summer long around a lack of a pass rush and the back end of the defense were all confirmed.  Notre Dame registered just one single QB hurry the entire game and barely got their hands on either Texas quarterback.  Meanwhile, strong safety Drue Tranquill was benched by half-time and free safety Avery Sebastian likely should joined him following several missed tackles – one of which would have stalled a Texas scoring drive.

Notre Dame’s defensive line was unable to get any pressure on Shane Buechelle throughout the night and the frosh played like a savvy veteran as he dropped dime after dime over top of the Irish secondary.  Had it not been for a few drops, his stat line would have been even more impressive.  As is, Buechelle completed 16 of 26 passes for 280 yards with two touchdowns and a single interception.

The ground defense wasn’t much better.  Sloppy tackling led to a 237 rushing performance by the Longhorns.  D’Onta Freeman led the way with 131 yards and a touchdown.  Last year’s starting quarterback for Texas, Tyrone Swoopes, did the most damage though.

Swoopes found the end-zone three times including the game winner in the second OT.  As was the case throughout most of the night, the Notre Dame defense was in position to stop Swoopes in the backfield, but he knifed through the porous Irish defense one final time to seal the Texas win.  Swoopes attempted just one pass  last night while attempting 13 runs, but even with knowing what was coming the Irish defense simply had no answer.

Some of this was to be expected.  Notre Dame was starting six new starters on defense – Tranquill, Sebastian, Jay Hayes, Nyles Morgan, Greer Martini, and Shaun Crawford – but many of the problems with the defense came down to fundamentals.  Notre Dame simply did not tackle well enough to win the football game.  For all the concerns over schemes and sub-packages and playing fast, Notre Dame just needed to play soundly and they would have won.

Instead, Notre Dame now has more questions to answer on the defensive side of the ball and the seat under Brian VanGorder is getting as hot as the asphalt in the Texas tailgate lots yesterday afternoon.  In his third year in charge of the Notre Dame defense, his troops continue to get torched.  In the last three Notre Dame games the Irish have surrendered a total of 132 points – 38 to Stanford, 44 to Ohio State, and 50 to Texas.

That just will not cut it.

The Notre Dame defense still has time to improve, but it failed its first test of the season miserably.   The young secondary can find its footing.  Shaun Crawford looked good in his starting debut and the personnel changes Kelly made at half time did at least limit the big plays in the second half from the Longhorns.  It looks like Notre Dame will have to count on true freshmen moving forward and that is usually not a very promising scenario.

Unless you’re a true freshman quarterback for Texas that is.

The defensive line will also have to play much better if the Irish defense is to improve at all upon its dreadful start to the 2016 season.  Between Jarron Jones, Daniel Cage, Jerry Tillery, Isaac Rochell, Jay Hayes, and Andrew Trumbetti, there is no reason VanGorder shouldn’t be able to find a rotation that creates a greater push up front. Rochell was one of the few bright spots on defense though with 9 tackles and 2.5 tackles for loss.

The linebacker play wasn’t much better.  Nyles Morgan racked up 13 tackles, but the linebackers were making plays downfield instead of in the backfield.  The Irish linebacking corps combined for just 1.5 tackles for loss.

Brian Kelly at least put up a confident front both Saturday night and Sunday afternoon when talking to the media expressing his belief that his young defense will improve.  It would be interesting to hear what his message is behind closed doors in the Gug today though to both his team and his defensive coaches.

Notre Dame has 11 more games in the regular season to improve on defense.  If they don’t, there will be no way to justify standing pat again this offseason and waiting for the effects of “recruiting to scheme” and “learning the system” to take place.  Action will need to take place.