Building a Case for Cam McDaniel 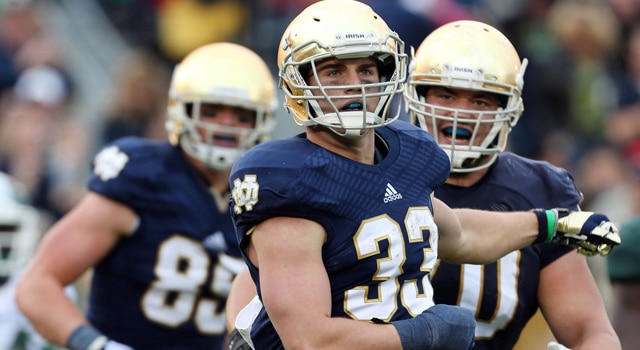 Notre Dame junior running back Cam McDaniel is a multifaceted man.  The general public knows him as the guy from the “ridiculously photogenic” Internet meme whose serene disposition and Derek Zoolander-esque pose landed him national recognition and an interview on NBC’s Today show.  Residents of his native Coppell, Texas, know him as the low-profile high school recruit who inconspicuously accrued 37 touchdowns as a senior, leading all Dallas-area high school players in scoring.  Notre Dame fans know him as the reliable supplement to starting running back George Atkinson III.

The time has come for yet another layer to be mixed into his malleable nature: Cam McDaniel, starting running for the University of Notre Dame.

The humble McDaniel, whose willingness to help his team is so considerable that at one point it resulted in a brief position switch to Notre Dame’s secondary, would never engage in such self-promotion.  No, the modest and self-effacing Texas native would need a boisterous and unabashed jabberer to pick up the mantel and plead his case for him.

Nice to meet you, Cam.  My name is Scott.

What’s a guy gotta do around here to be named the starting running back?

Not only is Cam ND’s most dependable running back, he literally looks good while doing it.  Just look at that photo of him with his helmet knocked off against USC.  My fiancée told me she heard angels sing when she saw the picture of McDaniel’s All-American mug (and I’ll have to take her word for it – angels won’t be presenting themselves to me anytime soon).

What’s the hold up?

It can’t be statistics.  Yes, George Atkinson has a higher yards per carry mark than McDaniel but it doesn’t tell the whole story.  During Notre Dame’s current three-game winning streak – in which they’ve played their best football all season – McDaniel has been the one Notre Dame head coach Brian Kelly trusts to get the job done, and for good reason.

Deep into the 2nd half as Arizona State rallied and threatened to swipe victory from Notre Dame’s grasp, it was McDaniel who burned crucial minutes off the clock.  Arizona State head coach Todd Graham became so concerned with his inability to stop McDaniel’s rushing prowess that he elected to take his chances and go for it on 4th and 13 from his own 22-yard line.  Cam sealed the Sun Devils’ fate with 61 yards on 9 rushing attempts (6.8 yards per carry) on two drives that led to 6 critical points.

The process was repeated against USC when McDaniel channeled his inner-video game and juked two Trojan defenders out of their shoes on a 36-yard scoot that ultimately set up an 11-yard touchdown pass to Irish wide receiver T.J. Jones, giving Notre Dame a lead they would never relinquish.  And this past Saturday against Air Force Cam was at it again.  Forcing Air Force to fumble to begin the second half, Notre Dame possessed a 24-10 lead and an opportunity to force the Falcons into abandoning their rushing attack should the Fighting Irish score another touchdown.  Brian Kelly rushed McDaniel four consecutive times for 30 yards (7.5 yards per carry), setting up a30-yard touchdown pass to T.J. Jones.

So if it isn’t production, what could it be?  Is it the talent profile?

Current starting running back George Atkinson III definitely has the genetic x-factor being the son of a former bone-crushing Oakland Raiders legend.  At 6’2” and 220 pounds – and possessing the agility of a leopard – Atkinson held major BCS offers ranging from Alabama to USC coming out of high school.  It’s no surprise Kelly has given Atkinson the starting nod over McDaniel – whose high school offer sheet was littered with service academies – in the hopes a watershed moment would finally arrive and Atkinson’s full potential would be realized.

But at what point does production surpass potential?

Air Force serves as the perfect comparison.  Notre Dame drove 46 yards to the Air Force 23-yard line on the first drive of the game and faced a critical 3rd and 1.  Starting quarterback Tommy Rees handed the ball to Atkinson and, seeing the intended gap occupied by a defender, George attempted to bounce to the outside instead of squaring his shoulders, getting low and driving the pile against a small-statured defense.  The result was a one-yard loss that would lead to a blocked field goal attempt, and ultimately Air Force taking a 7-0 lead.  Starting fast is paramount in defeating the option, and Atkinson’s choice to bounce outside instead of fighting for the first down – which has been a source of criticism for him in the past – was a momentum swing that gave Air Force an early lead.

Both Atkinson and McDaniel were involved in game-changing drives against Air Force, but only one cemented a victory for Notre Dame.

The time has come for McDaniel to be named the starting running back at Notre Dame.  After all, just try to look into those dreamy eyes and tell him no.