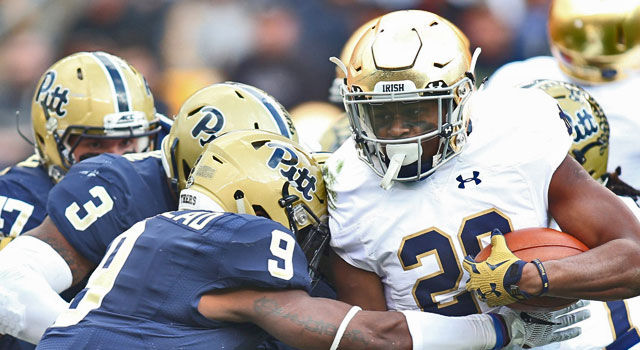 As Brian Kelly walked off the field at Heinz Field following his team’s 42-30 victory over Pitt, ABC/ESPN’s Todd McShay asked the Notre Dame head coach about the status of his star running back who was injured earlier in the day.  Kelly’s response indicates that a return next week could very well be likely.

He got hit when he went down on his shoulder – hit the field, it wasn’t necessarily a contact hit.  He’s day to day.  It doesn’t look like a serious injury so we think we’ll get him back next week,” Kelly said before trotting off the field.

And that sound you just heard was a collective sigh of relief from Notre Dame fans everywhere.

Prosise left Saturday’s game in the first quarter after converting a 3rd and 1.  Irish Illustrated reported that Prosise might have suffered a concussion and a shoulder injury, but Kelly did not make any mention of a concussion on the field to McShay.

Freshman Josh Adams filled in for Prosise and didn’t miss much of a beat with a career high 147 yards on 20 carries to go along with a receiving touchdown.  Fellow freshman Dexter Williams saw just three carries on the day even with Prosise out for more than three quarters of the game.

If Notre Dame is indeed able to get Prosise back next week, the Irish should consider themselves very lucky.  Notre Dame can ill afford to lose Prosise for any extended period of time with the season ending showdown with Stanford looming following contests with Wake Forest and Boston College the next two weeks.

That said, expect Brian Kelly and Notre Dame to be extremely cautious with Prosise.  Kelly knows just how important Prosise is this team – he put a red jersey on Prosise in practice just a few weeks ago to save hits on him.  Wake Forest will come to town next week with a poor defense and will almost certainly be a double digit underdog.  Translation?  Don’t be surprised to see Prosise sit next week out even if Notre Dame does have him back and available.

Expect there to be more on Prosise’s injury later today and tomorrow once Notre Dame is able to get back to campus and fully evaluate his status.  For now at least though, it looks like Notre Dame has finally got some good news on the injury front for once this year.