It took about three or four hours from Notre Dame’s latest and greatest loss of the 2016 season for reports to surface that Brian Kelly is a least exploring options outside of Notre Dame already.  Both Yahoo and ESPN reported sources have told them Kelly is looking to bolt from Notre Dame following the disastrous 4-8 season that culminated in a 45-21 loss to USC Saturday night.  Kelly, however, has been quick to deny the reports.

Around 3:30 AM, Notre Dame released the following statement from Kelly:

“I felt that I was clear with the media following yesterday’s game at USC when I was asked about my desire to be back as the head football coach at Notre Dame, but in light of media reports that surfaced afterward, let me restate my position.

I have not been, am not, and will not be interested in options outside of Notre Dame. I am fully committed to leading this program in the future.”

The timing of the release is interesting.  The lack of quotes from anyone other than Brian Kelly is also interesting.

Releasing that statement at 3:30 in the morning suggests that Kelly at least wanted to squash these reports as quickly as possible.  Not having anyone else quote – like say Jack Swarbrick – could be interesting as well.  To this point, no one other than Brian Kelly has said he will be returning in 2017 other than Jack Swarbrick back in October before losses to Navy, USC, and Virginia Tech.

The timing here is a stark contrast to Kelly’s flirtation with the Philadelphia Eagles and the NFL following the 2012 season.  In that instance, days passed before Kelly and Notre Dame issued a joint statement that Kelly was returning to Notre Dame.  This time around, Kelly waited just hours to state that he was intending on coming back.

It could be a very interesting few days, however, as rumors began to circulate late last week that Kelly’s future at Notre Dame was anything but certain.  A 24 point loss in which one of his players – Jerry Tillery – publicly embarrassed the program and University in the process couldn’t have done anything to solidify his status for 2017.

Kelly was asked specifically yesterday following the 24 point loss tot he Trojans if his immediately returning to Notre Dame instead of staying on the west coast recruiting as he has in years past was any indication that his job wasn’t safe.  Kelly claims that is not the case and for some reason this year he is more interested in exit interviews with current players than recruiting in the short term.   That ought to help with any west coast recruits.

Anyway, for now Kelly is denying he is looking to leave and for now no one at Notre Dame has jumped to his defense that he is definitely returning.  Speculation will most likely not die without some sort of statement from Jack Swarbrick that Kelly will indeed be his head coach next year. 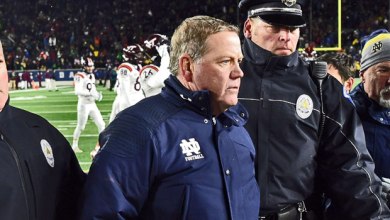 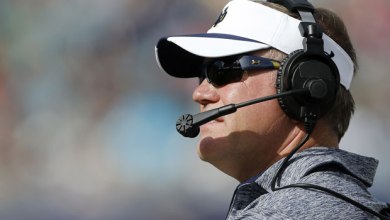 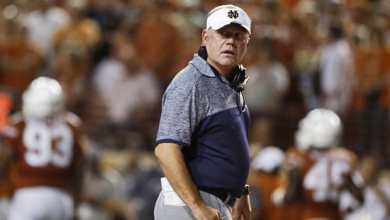 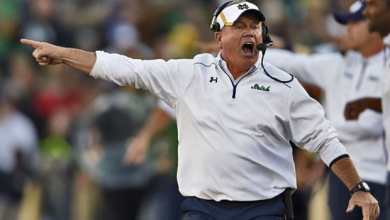