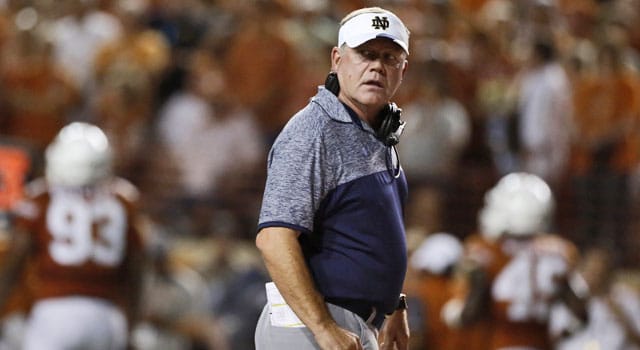 It has become hard for Irish fans to be optimistic in primetime road games the last few years. Brian Kelly is now 14-12 at Notre Dame in “true” road games – excluding neutral site or bowl games.

Over the course of the last three seasons Notre Dame is 3-6 in road games with their only wins coming at Temple, at Pittsburgh, and at Virginia last season and even in those contests the Irish struggled.

Against what ended up being a bad Virginia team, it took a last minute drive by DeShone Kizer to win the game.

The biggest true road win last season was over Temple. This was a good road win for the Irish under Kelly, because it was in fact the biggest game in Temple history and ESPN’s GameDay was on site.  Temple ended the season unranked however with a 10-4 record, so perhaps the ranking at that time and hype was a bit premature due to their lackluster schedule. Nonetheless, credit that as a quality win for Kelly.

Facing Pittsburgh on the road, the Irish were ranked 5th. Perhaps the Irish would struggle in this game as they had earlier in the season against Virginia.  Notre Dame had a substantial lead until the Pitt Panthers scored 13 points late to make the score closer than it needed to be 42 to 30. But it appeared the Irish had turned a corner on road.

It’s been a different story in the big primetime road games the last 3 years – the games against the best of the best, the blue bloods of college football. Everyone across the country watches to see what the Irish are made of in these games.

In 2014 an undefeated Notre Dame challenged undefeated Florida State in a game in which the Irish were the better team.  Notre Dame came up one play short as the referees called a questionable illegal pick play. A play the Irish had run earlier in the game without drawing a flag.  In fact, Peyton Manning made a living off of running this same play without garnering a penalty.

Just a few weeks later the Irish were in another key matchup of top ranked teams when they went to Arizona State. After an awful start, the Irish climbed all the way back in the game, but fell just a bit short once again ending their playoff hopes.

Fast forward to last year. Notre Dame traveled to Clemson in another primetime game. Clemson scored two easy touchdowns to start the game, and then Notre Dame defense completely locked down. It’s not necessary to go over all the details of the game, but the Irish would lose by two points in a game the Irish showed a lot of charisma.

With Notre Dame’s playoff hopes on the line in the season finale last year the Irish went to Stanford. A seemingly easier environment for the Irish compared to crowd noise at Death Valley and Doak Campbell Stadium. It looked like this time the Irish would prevail when DeShone Kizer gave the Irish the lead with less than a minute remaining. But in the back of my mind, I knew anytime left on the clock was too much time. Was I right.  Stanford hit a game winning field goal as time expired and fans rushed the field leaving Notre Dame fans disappointed on the road once again.

Then the first game of the season comes against Texas – a team Notre Dame had beaten by 35 points in South Bend and held to only 3 points a year ago. While Texas has a new offensive coordinator and are a much more mature team, the difference in this game was the fact it was played on the road. For whatever reason the Irish just don’t play well on the road. If this game was in South Bend or a neutral site game, Irish probably win.

Statistics don’t lie. Brian Kelly is 14-12 on the road and over the last three years the only ranked team he has beaten on the road is Temple.

Perhaps the most frustrating thing for Notre Dame fans is how close the Irish come only to come up short time and time again. Yes, there was a bad call at Florida State and an equally bad missed call at Texas, but losing on the road doesn’t happen because of one call.  A missed targeting call doesn’t give up 50 points. That is unacceptable for Notre Dame in year three under a defensive coordinator.

Take away the Temple game last year, and the last major road game that Notre Dame has won is almost four years ago at Oklahoma. Every year the Irish are on the verge of getting over the hump, but every year fans of opposing teams across the country see the Irish fail on the biggest stage. How can anyone blame them for thinking that Notre Dame is overrated or hasn’t won anything since 1988?

The 2016 season isn’t over by any means.  Each of the last 2 national champions both had a loss at home early in the season – Notre Dame’s was even more respectable coming on the road.  Notre Dame has a Heisman candidate in DeShone Kizer and if the Irish beat Michigan State next week they’ll be right back in the hunt for the playoffs.

At the same time, something has to change. Changing an assistant coach such as Brian VanGorder like many people suggest might not be in order just yet. Perhaps it’s the bright lights or the fact that other teams get up to play Notre Dame like it’s their Super Bowl. Maybe I’m overreacting, but after failure after failure on the road, something needs to change for Notre Dame to reach its potential.  Right now, road games are just too hard to watch.