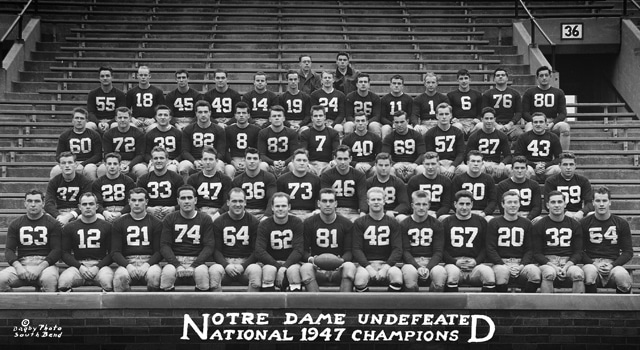 On Saturday, November 30th, Nick Saban fell short in his attempt to win a third consecutive national championship at Alabama, and his fourth in five years. It is a mighty task, and Nick tried, but many others have tried and failed. When the dust cleared in Jordan-Hare on Saturday, it left standing one name as the greatest college football coach ever.

(1) All-time .864 Winning percentage, second behind Rockne.
(2) In his first 9 years coaching, won 5 National Championships and was unbeaten 6 times.
(3) Coached four Heisman Winners, recruited a 5th
(4) Developed and coached most dominating dynasty in college football
(5) Developed and coached more College Football Hall-of-Famers than any other coach
(6) Unmatched winning percentage against his era’s top coaches
(7) Was so good he forced his school to deemphasize football
(8) Made two storied National Championship winning programs stop playing Notre Dame
(9) Only coach with a decades long legacy of his palace guard, his players.

If there was one human being who would be appalled at Frank Leahy being considered greater than Knute Rockne, it was Frank Leahy. Leahy had a cult-like reverence for Rockne, and while Leahy was confident and aggressive, his respect for Rockne made him shy away from any such discussions of comparison. As a schoolboy up there on the prairie in Winner, South Dakota, Francis William Leahy penned a passionate letter about how he wanted to play for the great Knute Rockne and Notre Dame. He idolized Rock and did so until the day he died.

After short assistant stints at Georgetown and Michigan State, Leahy served as line coach for Sleepy Jim Crowley, one of the Four Horsemen, at Fordham for five years. Leahy was more than adequate as a line coach. WAY more than adequate. He developed a Fordham line that became known as the “Seven Blocks of Granite.” One of those “Blocks of Granite” was an intense, studious, blocky, raven haired young man named Vince Lombardi. That’s right, Rockne taught Leahy; Leahy taught Lombardi.

Frank Leahy was hired to coach Boston College in 1939. His first year the Eagles were 9-2, losing only to Florida, 7-0, at home, and then to Clemson, 6-3 in the Cotton Bowl. In his second year, he took Boston College to an 11-0 record, outscoring opponents 339-65, beating Bob Neyland’s Tennessee Vols, 19-13 in the Sugar Bowl and winning the national championship. Bob Neyland was once called the best coach in college football-by Knute Rockne! Minnesota won the AP poll, Cliff Morgan and Ray Byrne voted BC the National Champion. Tennessee, whom Leahy and BC BEAT in the Sugar Bowl, won the national championship in two polls, which were conducted before the Sugar Bowl. A fortiori, those should be placed in BC’s column.

That alone should end the debate

Leahy returned to Notre Dame, despite Boston College’s fervent desire to keep him. They knew what they had, they were hot in pursuit to keep him, and they were smart about it. Simply, they were not Notre Dame. Never have been, never will be.

When Leahy returned in ’41 he immediately fashioned an unbeaten team, but with a 0-0 tie against Army. By his third year at Notre Dame, 1943, Leahy had won the National Championship and scared Michigan off the schedule.

After two years in the Navy, Leahy returned to Notre Dame and won three of the next four championships, ’46, ’47 and ’49. He had coached for two years at Boston College, seven in South Bend, and had won 5 titles. It was only the Notre Dame administration’s decision to cut scholarships from 33 to 18 in ’48 that slowed Leahy down.

No other coach has done that, and no other coach has, while running a clean, moral program, been so good that it scared a legitimatledy worried administration into deemphasizing football and cutting scholarships and resources.

Further, he has done something that no other coach has done. In three successive coaching years, ’43, ’46 and ’47 Frank Leahy coached Notre Dame to the National Championship. Of course, he was serving his country in the Navy in ’44 and ’45. What? Don’t go there. You’re going to tell me that you’re not going to count it as three in a row because of the two years in the Navy???

Further, besides ’48 when the yellow and blue Michigan team avoided playing the Irish and squeezed by in the polls. Leahy won four national championships in the five consecutive non-service years he coached his beloved Fighting Irish: ’43, ’46,’47, ’49.

But let’s look inside the numbers. In 1943 the Irish beat 8 of their opponents by 19 or more points. DOMINANCE. They beat Iowa Pre-Flight by one, 14-13, then lost a thriller to Great Lakes Naval Station, 19-14. These were not the AFA and the Naval Academey, they were the US Air Force and the US Navy!

IN ’46, other than the epic tie with Army, 0-0 in Yankee Staqdium, the only time when four eventual Heisman winners appeared on the same field-Blanchard, Davis, Lujack, Hart, the closest Irish win was a 20 point margin over USC. DOMINANCE.

In ’49, there was a 13 point win in East Lansing over MSU, and a 7 ppoint win over Kyle Rote and SMU in Dallas. Every other win was by 20 or more points. DOMINANCE. No one’s ever done that over five years. No losses to civilians, only two ties.

No other coach has coached four Heisman trophy winners: Bertelli, Lujack, Hart and Lattner. And, in a contest that made a young Paul “Bear” Bryant of Kentucky throw up his hands and leave his head football coaching position at UK in Lexington for College Station and Texas A&M, Leahy reached into Louisville and plucked star Paul Hornung out of Flaget High School to Notre Dame. Hornung said that Leahy told him, in his office, when Sherrill Sipes accompanied him on the trip, that Leahy thought Hornung could win the Heisman Trophy if he came to Notre Dame. Many promise it, only Leahy delivered.

What kind of Heismans do you like? Quarterbacks? Here’s Bertelli and Lujack. Guys who play quarterback in college and halfback in the pros? Here’s Hornung. Halfbacks? Here’s Lattner. And, wait there’s more. I’ll even throw in an end: Leon Hart.
THE DYNASTY 1946-1949.

They took on all comers, from sea to shining sea and played a paltry 16 games at home in the four years. The other 22 were played outside of St. Joseph County.

Dominance as we’ve never seen before or since.

BY HIS HALL-OF FAMERS SHALL YOU KNOW HIM

Nobody else comes close

RELATED
2020: Could it Be A Year Without Notre Dame Football?

BEAT THE BEST COACHES HE FACED

Here is Leahy’s winning record against the coaching giants of his era.

Total against his best contemporaries, 21-3-2!

This is a delicate point. But let’s be honest. Who among us has not had that fleeting thought that perhaps Notre Dame football is too dominant at the school? When the hot streaks are going there is a frenzy about the football program that can nearly overwhelm routine academic life, and, sometimes life itself. At the peak of his dynasty, Notre Dame’s admin, rightly or wrongly, reduced Leahy’s scholarships from 33 to a mere 18. That is why his record is best judged in his two years at Boston College and the first 7 at Notre Dame. After that he was hamstrung, a victim of his own greatness.

SCARED OFF TWO HUGE PROGRAMS AND MANY LESSER ONES.

The rout at Michigan in 1943 and the fierce Fritz Crisler, 35-12, made Michigan avoid scheduling Notre Dame for 35 more years. The Maize and Blue had never suffered such a defeat at home under Crisler, and Crisler found reasons to avoid Notre Dame thereafter. Excellent Catholic teams need not apply to play Michigan! Blaik found reasons not to have Army play Notre Dame after his visit to South Bend in 1947, when the Fighting Irish thumped the Cadets, 27-7. This “hiatus” came after the one whipping in South Bend came notwithstanding that after Army had played Notre Dame for 16 years in its backyard on the banks of the Hudson in New York City. One home game in Leahy’s lair every 17 years was a tad too much for Red Blaik.

They are unique. A voluntary cadre of players who played for Leahy, a level of passion and loyalty beyond being alumni at Notre Dame. A palace guard, a band of brothers identified by their love, respect and lifelong loyalty to Frank Leahy. Their ranks dwindle eadch year. as the youngest “Lads” are now 78 years old. But they are a testimony to their excellence and his passion and greatness.

His passion burned like no one else’s but he had the technical skill and the motivational and interpersonal skills as well.